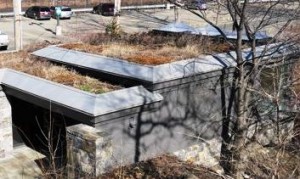 The Chancery, an office building with a garden rooftop adjacent to the Chapel of Our Lady Restoration in Cold Spring.