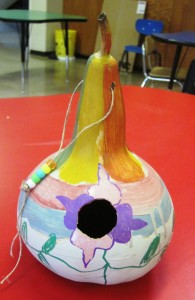 Nature has a synergy and sometimes mere man is able to follow nature’s lead. In such a way a program involving educating Garrison School second graders about native feeder birds turned into a more complex endeavor drawing in planting, states of matter, first-graders, and insect pollination into a multi-stranded web of ecological discovery. Outdoors educator Cathy Bakker, who has shaped this project through its many bends and turns, came to it originally through another program designed to enhance the environmental education curriculum at the school  Bakker and fellow environmental educator Pete Salmansohn conceived of the original “introducing native feeder birds by sight and sound” program and worked with second-grade teachers Mrs. Dodge and Mrs. Johnson to implement it. 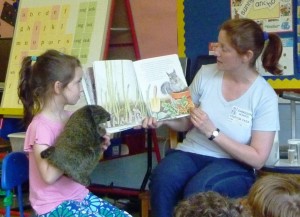 In that three-stage curricula, Bakker and Salmansohn first came into the classroom with hand-painted life size cards, and special recorders with bird sounds, and conducted a number of introductory activities, which focused on habitat and adaptability.  The concept of beaks as tools was examined through the use of objects (such as chopsticks and tongs) which imitated different types of beaks which were put to use trying to extract dry beans and beads from a rice-filled roasting pan, simulating the quest for food and the techniques used by a variety of birds to obtain it, and the unique match-up of beak to suitable seed.

The second classroom visit entailed careful observation of a feeding station set up just outside of the classroom’s windows  Echoing the Cornell Lab of Ornithology’s Project Feeder Watch, a winter-long survey of birds that visit feeders at multiple locales in North America, the children not only noted the types of birds, but studied different types of bird behavior not just observing, but learning.

The third portion of this classroom program involved the construction of bird feeders  In 2010 the feeders were made from recycled storage containers, including coffee and soda cans and egg and milk cartons  Decorated with shingles some were put outside as demonstration feeders and each child was able to bring one home  Although happy to be using recycled items, Bakker wanted to take it one step further, and sought to bring in something natural  Her first thought was to purchase some gourds, but she discovered that the cost per gourd was prohibitive. That’s when the idea came to her of growing the gourds from seed, and incorporating that whole other component into the curriculum. 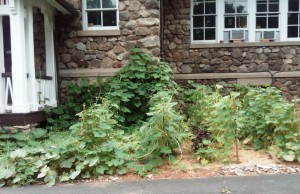 Gourds growing in front of school

Thinking it through, Bakker realized that the perfect opportunity lay with bringing first-graders into the mix  The project could turn into a two-year effort, with the first-graders planting the gourds during the spring, harvesting them in late fall, waiting while they dried, and making the bird-seed containers in the spring  In talking to first grade teacher Mrs. Ricci, Bakker was able to determine that not only was this a great outside of the classroom continuum, but that it meshed with some of what the first graders were studying in their science lessons: states of matter  Using the book How Groundhog’s Garden Grew by Lynne Cherry as a tie-in, the first-graders divided into teams and, laden with gardening gloves, tools, seed and compost (donated by Anne Symmes), they planted the gourd seeds, and, along with the seeds they simulated insect pollination by painting river rocks with images of pollinators including ladybugs and spread them throughout the garden.

Over the summer Bakker and her daughter Emma (handily a first-grader) watered and weeded the garden  And boy did their garden grow  A novice at growing gourds, Bakker did not realize how much they would grow and how strong they would be; growing posts were added  By September some were ready to be harvested, but not most, and the season was not completed until November, giving the children a change to watch the growth process  Once the gourds were harvested, Bakker brought them to her home to dry, setting up shelving outside to aid in the circulation of air needed.  (New fact learned  not a great idea to dry gourds indoors as they are too stinky).  As the gourds dried, their weight decreased radically, with ten-pounders turning into 1-pound lightweights by February. It was a learning process for Bakker as well as the children, as some gourds rotted or cracked, but the final yield of about 30 gourds was enough to enable each child to take one home, laden with birdseed, while leaving some as samples.  In fact, when all of the snow finally melted, more gourds were discovered underneath 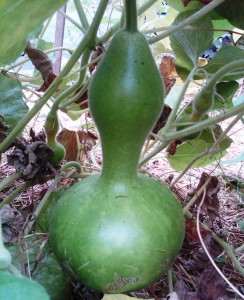 Along the way, many other elements were tied into this project.  Children wrote about their experience, math skills such as measuring for depth when planting were developed and the children learned how Native Americans used gourds, bringing in social studies.  Aspects of the 2nd-grade curriculum: observing and measuring changes in living things, and observing and measuring changes in the environment, were addressed. For a final project, Mrs. Dodge instructed the students to write the story of the entire two-year process.  The resulting accordion-style, illustrated books, all entitled From Seed to Birdhouse, outline the steps in sequential order in each child’s unique style.  By adding a language arts component, Mrs. Dodge further incorporated the hands-on science and environmental experience into the second grade curriculum.

Bakker hopes to continue this and other environmental education programs at both schools and in the community at large.  She has come to environmental education “her passion” after 12 years spent in the corporate world, working in human resources.  Seeking a change, she returned to school and obtained a Masters in Elementary Education/Special Education, and realized, after noticing that many of her lesson plans were science and ecology-oriented, that what she wanted to do most was to educate about the environment.  After completing an internship at the Department of Environmental Conservation (DEC) site at Stony Kill and doing some grant writing for environmental education programs, she finally started doing what makes her most excited and conducting programs herself.  The cycle begins again very shortly.  The garden soil will be readied and this year’s first-graders will get their tools ready and take their turn as growers of the gourds.

The GUFS program was sponsored, in part by the Hudson Highlands Land Trust Environmental Discovery Grant program, which is made possible through donor-directed funding. It is a multi-year commitment to nature study and sustainability education in local area public schools. A partial list of the programs funded by this program include School Forest Day and the 7th-grade water study/Hudson snapshot day in the fall at GUFS; and, at Haldane, the after-school Eco-kids workshops, the High School Senior Nature Retreat, and the AP Biology water study/Hudson snapshot day in the fall.
Photos Courtesy of Cathy Bakker and HHLT

2 thoughts on “Nature Can Be the Greatest Teacher”