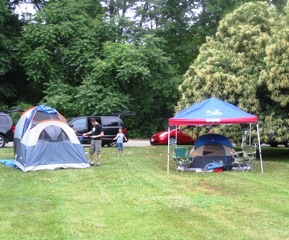 The Rec Center lawn was dotted with tents

For the intrepid adventurers bound and determined to test their outdoors mettle at last weekend’s Hudson Highlands Land Trust’s Sleeping Out Under The Stars, mere thunderclouds were no obstacle to having a great time.  True, the great indoors was mere feet away, in the form of the Recreation Center, but during the first few hours, when Philipstown.info visited, there was far more action outdoors than in, despite the spitting rain and threatening skies. 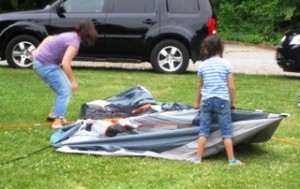 How did we do this last year?

Families arrived and began hoisting their tents, some displaying the know-how of frequent camper-out-ers, while others had the perplexed expressions of first-timers. One of the latter was Cold Spring’s Cindy Chiera, who achieved tent mastery after a couple of false starts. This was her first time camping overnight, although she and her family had been to just the barbeque in previous years. Over 200 people were expected for this seventh edition of this annual event. 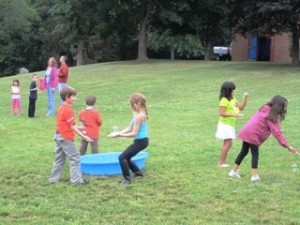 Bubbles, a chance to run around – – that’s all that’s needed

Children were running around the expansive lawn in front of the Community Center, as the barbeque sizzled with the requisite hot dogs and burgers.  Bubble-filled blow-up pools were the hub of the action outside, while the basketball court of the adjacent gym saw some indoor action as families filtered in.  Popular Poughkeepsie bluegrass band No Brakes kept everyone in the swing of things.  The welcome table was kept abuzz with purchases for the nifty raffle prizes, including a VIP West Point football game viewing, Hudson Valley Shakespeare Festival family tickets and a private tour of the Bear Mountain Trailside Zoo. 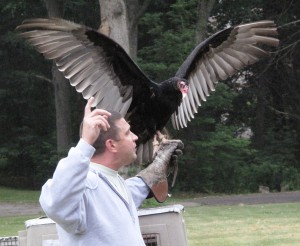 After dinner, a demonstration on raptors and reptiles, including a baby alligator, was presented by Brian Robinson, followed by the traditional bonfire with songs sung round the campfire. To liven things up, Mother Nature supplied a torrential downpour beginning at midnight and continuing for hours.  According to the Land Trust’s M.J. Martin, “Our tents got wet but even the rain couldn’t dampen our spirits!  Everyone woke bright and early to feast on a breakfast of bagels, farm fresh hard-boiled eggs from Finger Farm, yogurt, fruit and cereal”¦oh yes, and coffee, plenty of good strong coffee”¦” 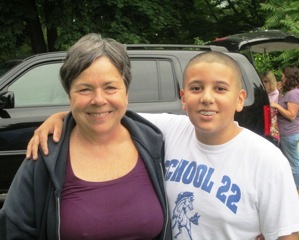 Grandma Terry and grandson Dustin enjoy the activities together

Terry Alexander, a nurse practicioner, was attending with her grandchildren and great-grandchildren (though she didn’t look old enough to have any of these) for the fourth time.  She said the event was so enjoyable because “aside from the music and camping out, the best thing is that the kids can run and run and run, and it’s all so safe.”  Her grandson, Dustin, concurred, “I love the bonfire, the singing, the bubbles and stuff and the birds of prey.  My only problem is that I can’t get to sleep because all the kids are making so much noise.” (Not such a bad thing, in this context.)

The annual event is a fundraiser, with all proceeds to the Garrison Children’s Education Fund and the Haldane School Foundation in support of school environmental programs.

Photos by A. Rooney, except as noted

One thought on “No Rain, No Gain!”