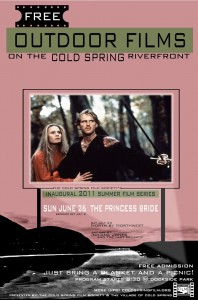 It’s an idea that’s been bandied about for a while, in the “how perfect someone should do it category.”  Well, now someone has, the nascent Cold Spring Film Society (CSFS), to be specific, and that great idea is:  showing movies at Dockside Park.  Movies likely to appeal to the entire community, screened in a large, beautiful expanse right in the heart of town, and for free to boot.  The inaugural season of three films gets under way this Sunday, June 26, at 8:30 p.m. with a showing of the (CSFS description) “hilarious, swashbuckling post-modern fairytale The Princess Bride. Later screenings include the Hitchcock classic North by Northwest and popcorn movie incarnate, Indiana Jones and the Last Crusade.

The series not only has the approval of the Cold Spring Village Board, but the backing as well.  CSFS co-founder Jen Zwarich calls the Village Board “completely supportive.  Right away they said it sounded like a great idea.  There has been tons of positive support from all of the trustees.” The other co-founders, Stephanie Hawkins (who has shown “tireless dedication to actually making this happen,” according to Zwarich) and John Wayland have done the bulk of the initial organizing. They have been joined by an additional group of about 15 others adding their talents – from postcard design to legal advice – with an overall vibe of “positive energy, an outpouring of support,” says Cold Spring’s Zwarich, who teaches film history at New York University and Columbia, “it feels like an idea whose time has come, collectively.”

The impetus behind organizing these screenings is to create a community arts organization whose focus is to “foster goodwill in the community with fun, safe, film-related events.” A major goal is to be inclusive of all walks of life, and different age groups, in particular those frequently under-served with activities: seniors and teen-agers.  This year is looked upon as the springboard for what CSFS hopes will be an array of events, some tailored to specific ages, many aimed at bringing all ages together, in years to come. 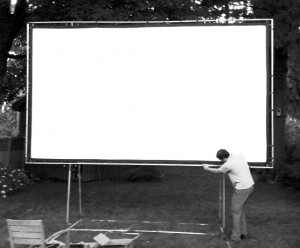 Dockside was the natural first choice as a home for the screenings, Zwarich calling it “a good use of the property while they figure out what to do with it; of course we’re hoping that this will be incorporated into what it becomes.” The films will be projected onto a large screen (a test run of screen assembly was done recently in Zwarich’s backyard!) and, for now, will be run from DVD or Blu-Ray technology. Long-term aspirations include a dedicated, high quality digital projection system, especially considering the challenges inherent in outdoor projection, but that’s for a future wish list.

Moviegoers are encouraged to bring blankets and picnic and suggested attire for the little ones is their pajamas.  This year, Cold Spring’s Go-Go Pops will be on hand, selling their natural fruit pops, while more food offerings, including “box dinners” and possibly even a popcorn machine may be on tap in years to come.  The CSFS has also received tremendous support from local merchants, and hopes that locals will stroll down Main Street and visit the shops and restaurants en route to the screenings. Other support has come from Village Trustee Bruce Campbell who has provided sound equipment, Depot Docs, which contributed their former projector, and the Hudson Highlands Land Trust, which will be providing a tent to put that projector under.

For this year, some of the other costs, ranging from publicity to fees for rights have been underwritten by members of the CSFS, as a gesture of support for the community.  The CSFS will be incorporating as a 501C-3 nonprofit in the future. This year’s Summer 2011 Film Series Community Sponsors are:

Each of the evenings will begin with a brief program of classic cartoons and shorts to transition from the remaining light of the day into the darkness needed for full appreciation of the features. Plans for future years include linking up with local schools to engage students in film-related academic or extra-curricular activities, for which Haldane Superintendent Dr. Mark Villanti has voiced his support, and troubleshooting ways to provide safe transportation to the screenings for seniors.

Each screening will take at 8:30 p.m. and will have a rain date; the schedule is as follows:

Princess Bride and Indiana Jones are suitable for all ages, North by Northwest is a Hitchcock suspense film, and although not graphic, would probably appeal most to those ages (about) ten and up. For more information, and to sign up for email notification of future events, visit http://www.coldspringfilm.org/ or the Facebook page.
Photos courtesy of CSFS

One thought on “The First Picture Show: Free Movie Screenings at Dockside”