Feuding between Cold Spring Mayor Seth Gallagher and Cold Spring Fire Company Number 1 (CSFC) that accelerated over firehouse keys in April has become a full-scale conflict involving lawyers and clashing visions of the roles of government and the extent of fire company independence. Evidence of the dissension surfaced recently in correspondence from the village government to the fire company seeking meetings and information and suggesting a new regime of accountability, and a letter from the fire company attorney that accused Gallagher of “continued nuisance” behavior and of intending “a complete takeover” of the CSFC. Through official requests to the village clerk, Philipstown.info obtained copies of several recent letters.
In separate interviews on Monday (July 25), Gallagher and fire company officials offered often-conflicting accounts of the overall situation and the latest incidents. They also expressed contentious perspectives on governance, accountability and even history, demonstrating bruised feelings and a wide gap in relations between institutions and individuals with long residence in the village and operating a stone’s throw from one another on Main Street. The mayor insists that his goal “is not to take over, not to take control” of the fire company. “The Village Board is responsible for fire protection in the village. There’s also a financial responsibility. The Village Board–not me, the Village Board—has requested information about fire protection for the village.”
Fire Company President Michael Bowman and Vice President John Landolfi said Gallagher is engaging in a vendetta against the company because of perceived slights over firehouse keys and the status of the former Cold Spring Fire Company Pipe and Drum Band. The band, founded by Gallagher, a musician, decamped from the company this spring and changed its name. Bowman said the pipe band left after the company had thought it had worked out an arrangement to satisfy insurance concerns regarding members marching in parades and accounting for its finances by forming a separate nonprofit.  Bowman said the fire company wanted the band to remain associated with the fire company. Gallagher spoke of an atmosphere of hostility created by some fire company members and said bagpipe band members suggested moving to different quarters.
“Nobody wanted the band to walk away,” said Landolfi.
“What all this comes down to is that what is in the best interest of all parties, especially the taxpayers, is to have the fire company run the way it has been for a 115 years,” said Bowman. “What are we doing so wrong that all of a sudden Mayor Gallagher thinks he has to come and take control of us,” asked Landolfi. 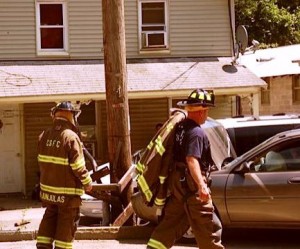 Dueling by correspondence
“There was a point in June when the mayor called me at [my regular] work at 10 a.m. screaming and yelling that I was a village employee and that he could bring me down before the Board of Trustees and have me account for my actions,” said Bowman, citing one of what he called several examples of hostile mayoral language that prompted the fire company to insist on written communications.  “I don’t work for the Village of Cold Spring, I volunteer for the Village of Cold Spring,” added Landolfi.
On April 27 Gallagher sent the first of a series of letters to the fire company. “As you know, there has recently been some disagreement with the fire company regarding the firehouse,” the mayor wrote to Bowman. “The Village Board wishes to maintain its long-standing good relations with the fire company, and feels that opening a dialogue with you and the chief would be helpful. With that in mind the Village Board respectfully requests a meeting with you, the fire chief, and any other members of the Board of Governors you would like to include.” The letter added that Village Attorney Stephen Gaba also would attend the session, “offering guidance. Since we will be ‘conferring with counsel’ the meeting will not be open to the public or press.” The letter told Bowman “among the items we would like to discuss is the relationship between and respective responsibilities of the fire company, the village fire department and the Village Board. If there are any particular issues which you would like to discuss, please let me know and I will advise the Village Board.” Gallagher also enclosed a memo from Gaba’s law firm outlining state law on village fire companies.
The fire company officials objected to Gaba’s presence at the proposed meeting. Gallagher then dispatched another letter to Bowman announcing a public meeting on June 16 to review the study on fire protection prepared for the Town of Philipstown by consultant Ron Graner.  In anticipation the mayor asked the fire company for “a list of active members with number of calls attended” for a year, completion of the staffing survey from the Graner study, and “fire company’s bylaws, rules, regulations, procedures, and Certificate of Incorporation.” Gallagher sent another short letter on June 1 about Graner’s unavailability for the public meeting and also wrote, “The board’s liaison to the Fire Company, Trustee [J. Ralph] Falloon, has informed the board that you have denied the board’s request for information “¦ have hired an attorney, and wish to have all communication through him,” Gallagher wrote. “Kindly have the attorney follow up with a response in writing regarding the Village Board’s request for information.”
Things simmered below the surface. Then, according to Gallagher, the Village Board received a letter dated July 19 from William Florence, the CSFC attorney, in response to a letter from Gaba. Along with accusing Gallagher of being a “nuisance” who seeks to take over the CSFC, Florence said that “the fire department simply wants peace” and that its members “are at a complete loss as to the intent behind the mayor’s agenda against the fire company.” Florence also mentioned the CSFC’s historic “self sufficiency” and said that “with very sporadic exceptions, the fire company has run its own affairs,” including fundraising and negotiating contracts for service with areas outside the village.
Gallagher and Gaba provided excerpts of records showing the fire company founders in 1896 specifically asked the village government for permission to organize and that 10 years later a CSFC official termed the company “subordinate to the Village Board of Trustees and “¦ willing subjects to their lawful authority” while remaining self-reliant financially. 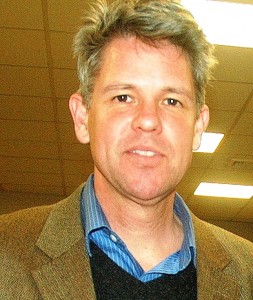 State law
New York State law adds another dimension to the debate. In an April 25 legal memo, Gaba’s law firm outlined provisions of Municipal Home Rule on village fire companies. Gallagher’s April 27 letter referred to the memo “Although a volunteer fire company in a village is a separate and distinct corporate entity from the village, under Village Law Article 10,” part of state law, “when a volunteer fire company is formed within a village a `village fire department’ automatically comes into being,” the memo states. “Although served by members of the village volunteer fire company, the village fire department is governed and controlled by the village board.” Put more succinctly, Gaba said in a phone call July 25, “as soon as you have a village fire company formed, the village automatically has a fire department; the only thing the fire company can do is man the fire department.” Gaba and Gallagher concurred that Village Board control does not extend to on-scene firefighting and emergency responses, at which the fire chief is unquestionably in charge.
Bowman and Landolfi didn’t dispute the language of the law or question village role regarding the company. But they argued, they have operated administratively as an “independent fire company” since inception in 1896 and don’t believe there is any reason for a change in that model, which they believe is a financial bargain for the local taxpayers. “It’s ridiculous to go to this point [discussing state law] because he hasn’t stated what his ultimate goal is,” said Bowman.
“Is he going to have the village clerk take over the duties of administering the company?  I don’t [think] she is set up for that,” said Landolfi.  Bowman predicted that encroachment by the mayor onto the traditional turf of the fire company would undermine volunteer spirit.  “That is what this all comes down to and the reason why I’m fighting it so vehemently, is to preserve the volunteer system that we are proud of here.”

Disagreeing in public
Despite the lawyers’ involvement, Gallagher said the village foresees no legal action against the fire company. “No, that’s not contemplated,” he said Monday. “They’re performing their main function, which is to provide fire service.” He also noted that the village expects to spend about $143,000 this fiscal year on the fire company, not including expenses for the firehouse itself, with the total outlay spread throughout several budget categories. The village plans to fix the deteriorating floor and is checking the feasibility of thoroughly renovating the whole structure to make it an improved fire-fighting facility.
Bowman said the fire company had no intentions of going to court “unless we are pushed there. We only sought legal counsel as a result of the mayor utilizing the village attorney.”
Gallagher also said that the Village Board wants to settle things amicably.  “We tried to do it informally,” he said. “We’re just trying to work it out and thought we could keep it out of the press by having the attorneys talk. The lawyers weren’t going to be arguing a case with each other” but working out details on assorted issues. As firehouse repairs proceed, the Village Board needs communication with the firefighters, he added. “We just really want to meet with them.”
For their part the fire company officers expressed the same desire for ending the turmoil with discussion.  But they want to understand the ground rules. “We sat in the fire house with two trustees, Falloon and [Airinhos] Serradas and were told ‘we’re going to straighten this out.’  We thought the issue was dead”¦and then we get bombarded with letters, emails and phone calls from the village attorney,” said Bowman.

7 thoughts on “With Words and Lawyers, Mayor and Fire Company Carry on Feud”