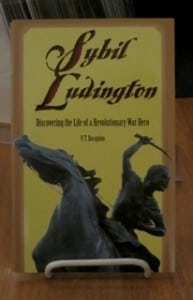 One of Daquino's two books on Sybil Ludington

Historical Society talk examines her life and historical research itself

History is history, right?  It’s served up to you throughout school, usually without any questions asked about how it came to be known as the truth of what happened.  When we question history, outside of academic circles, it is usually to question the why did this happen? or what resulted from it?, rather than is this history the legitimate version of what really happened?

At the inaugural Putnam County Historical Society, Putnam County Bicentennial lecture, speaker Vincent Daquino addressed this question as much as he discussed Sybil Ludington’s life.  His interest was piqued in Ludington by the sign he passed every day going from his home in Mahopac to his teaching job in Pelham. Daquino’s curiosity about his subject grew as his research revealed pieces of her life’s puzzle which didn’t fit together.  Stopping first at the Mahopac Public Library, the librarian explained the bullet points of Ludington’s reason for fame, her 40-mile ride, at the age of 16, from Kent to Stormville and back on a rainy night in 1777, alerting the militia that a British force had begun destroying Danbury. As a teacher, Daquino was stunned, “You mean a female teenage hero of the Revolutionary War? All heroes were male and white — it stopped me cold.”

After Daquino acquired more information, he became convinced that Ludington was far more than a footnote in history.  He compared her to Paul Revere:  “Revere went 12 miles, Sybil, 40.  She rode in the middle of the night, in the mud, with no helpers, and — she didn’t get caught!” Daquino’s thoughts went to “why isn’t every kid in New York studying Sybil Ludington?  Now they are — it’s a part of the 4th-grade curriculum.”

Daquino continued, telling Ludington’s story. “Why did she ride?  She was the eldest of seven children [five more followed, after 1777]. She, her mother, and her father, Col. Ludington were sitting by the fire, which was unusual, as generally the colonel was out, commanding his 400-man militia (volunteer) force, who were scattered throughout a wide area.  It’s raining; they hear a horse approaching.  They know there’s a 300-guinea reward for Col. Ludington offered by Gen. Howe because Col. Ludington was stopping thieves from stealing supplies for the British.  A knock on the door: ‘What is it you want?’ ‘Sir, look to the east.’  The sky was bright red. ‘It’s Danbury, sir, it’s been attacked by 2,000 men and they’re burning the city down, they’re setting buildings on fire.’” According to Daquino, Ludington’s response was that he had no one to send. “Sybil said ‘Father, send me.’  In those days 16 was mature.  Col. Ludington reluctantly agreed to put his daughter on a horse and send her on this mission.  How did she know where people lived?  The colonel had a mill and he often went out to people to discuss matters; the whole Highlands was his territory.  No one else could know that route.  She traveled to the homes of the officers and from there alarms were sounded, alarms which were made of a metal ring and rod, which sent signals out, across neighborhood by neighborhood.  The next morning all the officers gathered at the Ludington home, and then they went off to Danbury. A battle took place that night.” 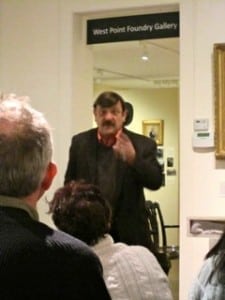 Daquino speaking to the audience.

After concluding the exposition of the story that made Sybil Ludington locally famous, Daquino explained his motivation in exploring her life further and in spreading the word as to what he unearthed. “This story grabbed me because it tells me the importance of history.  If we do not allow our children of today to learn their yesterdays, we will steal their tomorrows.”  When researching further, Daquino found that from the 1930s onwards almost every book had the same paragraph about the rest of Sybil’s life: “After her famous ride Sybil Ludington lived to be 77 (sometimes 78). She married her childhood sweetheart who was a lawyer in Catskill, New York.  Her son was a hero in Kansas. She was the mother of 6 children, 4 boys, 2 girls.”  Daquino “took that paragraph and went to work” — an archaeologist of local history. “I went to 22 cemeteries looking for Sybil’s children.  Her husband’s grave: nothing.  Lawyer in Catskill; lawyers leave paper trails. None. I said wait a minute.  Then okay, wait — a hero in Kansas, that should be easy. I find Edmund Ogden, hero, helped found Fort Riley.  Looked up Edmund Ogden … wrong.  It took me three and a half years to sort this woman’s life out.  I traveled here to the Historical Society, to the historian’s office in Brewster, Albany, Unadilla, place after place.  Her life [as described] was absolutely wrong.  All the facts were wrong.  Little by little I was able to pull it together.  One little error threw everything off. A simple error, which had Sybil married to someone named Henry Ogden, who turned out to have instead been her son, led to incorrect facts being accepted as truth.”  After sorting out the correct Edmund Ogden and ascertaining that Sybil had but one son, not six children, it became easier to uncover the story of Ludington’s life after her ride.  And here is the rest of that story:

Most women then died at 45 or 50.  Sybil stayed by her mother’s side until the last of the 12 children were born.  She married at 23, and Ogden was a hero who had served with John Paul Jones. Together they owned property in Patterson, a public house.  In 1793 they sold the property, because all the soldiers, their customers, were gone.  They moved on to the next metropolis: Catskill, right across the river. It was the days of steamboats and there were 24 taverns in Catskill at that time … In 1803 Sybil applied for an innkeeper’s license — the only female among 24 males.  She opened her own tavern as The Widow Ogden as her husband had died of the fever in 1799.  They burned the bodies, which explained why there was no grave for Ogden. Sybil and her son lived alone. Her tavern was located on the corner of Green and Main, which was at the center of the devastation caused by the yellow fever epidemic. By 1810 Sybil’s son was married — I found this out from a newspaper clipping put into a little tin box in a museum just outside of Catskill — and she sold the tavern for three times what she paid for it.  She took in her son, his wife and baby and bought them a house … There were tough times but she lived a long life.  She is buried in Patterson, with her mother, father and two of her brothers.

Daquino calls Ludington “exactly what Americans are made of: she was a tough woman who did what she had to do. It is our obligation to sing her praises. She’ll continue to make us understand that Putnam County, in its 200th year, must go on.”

Dacquino taught for 35 years, and worked as a writer on the side.  Now retired, he has written several young adult novels as well as his two works on Ludington: Sybil Ludington: The Call to Arms, for adults and a “classroom-ready version” of this book, Sybil Ludington: Discovering the Life of a Revolutionary War Hero, for fourth and fifth grade students. Dacquino has also written Hauntings of the Hudson River Valley: An Investigative Journey, which includes the story of the confession of George Denny, hanged in Putnam county in 1844; tales of the haunted Smalley’s Inn, still open to diners in Carmel; and of Chief Nimham, massacred in Van Cortland Park in 1778, and more.

The next Bicentennial lecture at the PCHS will deal with the Cornish Estate.  All of this year’s lectures will highlight topics “from our own backyard” according to the PCHS’s Kendall Ingenito, in her introductory remarks.  For more information visit the historical society’s website.
Photos by A.Rooney

One thought on “Sybil Ludington: ‘Exactly What Americans Are Made Of’”