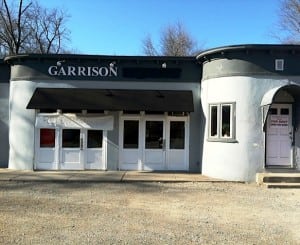 Garrison commuters can breathe a sigh of relief knowing that once again they will be able to pick up a hot coffee and a muffin on the way to the morning train.  If all goes as planned, The Garrison Cafe will open for business in mid-March. The cafe, located on Route 9D just south the Garrison Post Office, replaces The Garrison Market which closed last fall. The new cafe is being developed by Pascal Graff, chef and owner of Cold Spring’s Le Bouchon restaurant. Graff said the cafe will be open from 6 a.m. until 6 p.m. with hours extended into the evening once summer arrives.

Graff said he can’t really put his new cafe’s menu into one tidy category. “We’ll offer fresh, honest food – nothing fancy, not expensive, cash only,” he said. The cafe will produce its own croissants, scones and other baked goods. “And when you ask for a sandwich – we’ll make it fresh, right in front of you.” Burgers will also be on the menu as will “free-form pizza” baked in the cafe’s wood-burning oven. Graff said once the hours of operation are extended the cafe will also feature “blue plate” specials. “We’ll have one special a day – spaghetti bolognese or cordon bleu – things like that.” He also said the sale of beer and wine may be added if things go well.

The cafe will feature a new, expanded terrace for eating outdoors during good weather months. Graff said that for restaurant owners in Philipstown, “…a terrace is what saves your life.” Plans also call for improved parking and access.  A new, paved parking area will be added along with a U-shaped driveway, making it easier for vehicles to enter and exit.

Graff said that he hopes the new cafe will be popular with teenagers. “I want it to appeal to the kids. They have nowhere to go now.” He also said that families taking part in recreation programs at Philipstown Park will be an important customer group.

Local passersby probably lost confidence in recent weeks when the “Coming Soon: Garrison Cafe” banner was taken down and replaced by a new “For Rent” sign. Graff said that when he discovered that the site’s septic system needed significant repairs he walked away from the project. But, a few weeks later, the building’s owners called him to say that they had completed the necessary repairs at a cost of $19,000. The Garrison Cafe project was back in business.