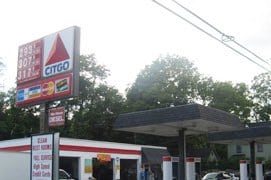 Planning Board to Discuss at Next Meeting

A simple line in the Cold Spring Planning Board agenda for Tuesday (April 3) is feeding speculation that the Elmesco garage and gasoline station at the edge of the Foodtown Plaza seeks to install a Dunkin’ Donuts shop on its premises.

As its first item for discussion on Tuesday, the Planning Board agenda lists “introduction to Elmesco application, referred by building inspector.” Released shortly before the weekend, the agenda had by Saturday afternoon spawned speculation that something major might be afoot – like a Dunkin’ Donuts franchise, to replace the car-repair bays at Elmesco.

It remains to be seen how such a venture might affect the already often-traffic-congested Foodtown Plaza area, or other businesses (such as Main Course and Foodtown) that sell coffee or pastries and snacks to those on the run, the concerns of Benedict Road and Marion Avenue residents, already worried about Foodtown expansion and the location of the post office, or local sentiment against the addition of large national franchise operations to a small village.  The Planning Board meeting is scheduled to begin at 7:30 p.m., Tuesday, at the Village Hall, 85 Main St.