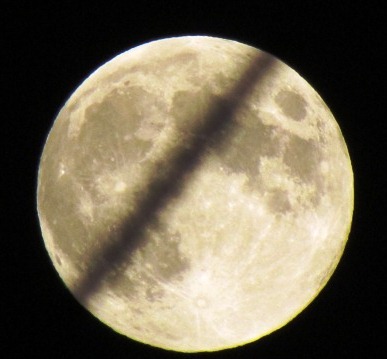 The only civilian to capture incredible incident in near outer space

Philipstown resident Rille Neap-Pallus has won national honors for a photograph of the moon that she took late last year. The photo, which Neap-Pallus admits was purely the result of good luck, captured a lunar event that lasted mere seconds yet caused a huge international incident that threatened Russian-American relations and even stirred heated debate in closed-door meetings at the United Nations. Her lucky shot earned her “Photograph of the Year” honors from the International Society of Lunar Imaging Education (ISOLIE). She will receive her award tonight at the organization’s annual dinner in Hollywood, California – a large three foot by three foot black and white photo of a crescent moon taken by Ansel Adams in 1949 and signed by both Adams and Neil Armstrong – the first man to set foot on the lunar surface. Details of the incident were only released to the public in late February after being embargoed by the U.S. Space Agency and NASA for more than two months. Neap-Pallus’ photo was not officially released until just last week although she had been allowed to keep the original. Incredibly, hers was the only image taken by a civilian that captured the late night event.

During the full moon on the night of Dec. 10, 2011, Neap-Pallus was in her back yard on Copper Mine Road trying out a new camera she had purchased earlier that day. It was a perfectly clear night and she was attempting to capture her first digital image of the full moon – but was having great difficulty with the 30-power zoom lens, which she had extended to the maximum. “It was almost impossible to keep the moon in the frame for more than a split second. Foolishly I wasn’t using a tripod – and it didn’t help that I had had more coffee than usual that day,” she recalled. To compensate, she took shots as quickly as possible as the image of the moon danced tantalizingly in and out of the frame. “My neck was sore I was concentrating so hard on shooting fast. I thought I saw something strange through the viewfinder. I looked at the moon with my naked eye – but what I saw quickly vanished. I really wondered if I had imagined it. “Neap-Pallus said that when she reviewed the results of her rapid fire shooting, “I could not believe my eyes.”

There on her camera’s viewing window was crystal clear, perfectly-centered photo of the full moon – but there was something terribly wrong. The photo revealed what she called a “thick dark smudge” which ran in a perfectly straight line from 8 o’clock to 1 o’clock on the face of the moon. “I was very upset. As crazy as it sounds my first thought was that I had just witnessed the first case of lunar abuse,” Neap-Pallus said. She tried many phone calls the next day – including to NASA, which denied that anything had taken place on the moon’s surface, while at the same time insisting that she email them a copy of her photograph.

It turned out Neap-Pallus was actually dead on. A newly launched, unmanned Russian space craft, ironically named “лунный розыгрыш” or “Respect the Heavens,” had developed mechanical problems just after it entered low lunar orbit. Russian scientists, under pressure from the international community, eventually admitted that because they feared losing the multi-million dollar craft entirely, they had sent a command to the partially-disabled vessel to jettison its supply of an experimental, carbon-based fuel being tested for its potential as a backup fuel system for deep-space exploration. The discarded fuel left a clearly visible line across the moon’s surface as the spacecraft flashed overhead at speeds approaching 30,000 kilometers per hour.  Once the fuel landed on the rocky surface it quickly disappeared, vaporized by the extremely hot temperatures on the moon’s surface estimated at 462 degrees Kelvin.

Neap-Pallus now takes great delight in telling her story – in part perhaps because she was born in Moldova, a satellite of the former Soviet Union. “I was very happy that the Russians did not permanently damage the beauty of the moon, and that my photo helped to expose them,” she said. Neap-Pallus emigrated to the U.S. in 1990. In a final bit of irony, she has been employed as a bartender at the Half Moon restaurant in Dobbs Ferry since settling in Philipstown.

Philipstown.info has invited Ms. Neap-Pallus to speak about her experience at 69 Main Street in Cold Spring but no date has been set yet. Stay tuned for further details.