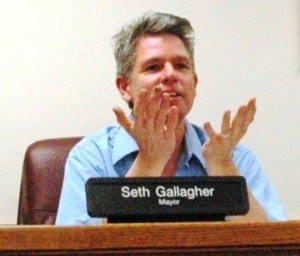 Cold Spring Mayor Seth Gallagher was recovering Monday afternoon from a concussion sustained in a morning bicycle accident near the Haldane school complex. Taken by ambulance to St. Francis Hospital, Poughkeepsie, he was expected to be held there overnight and released Tuesday morning, his wife, Erika Wood, told Philipstown.info. Wood and Village Clerk Mary Saari said that Gallagher participated in “Bike to School Day” May 7, in which parents ride with their children to school. He was bicycling back down the hill on Craigside Drive when he hit a speed bump and was flung from the bike, his wife said. “Basically, he was going too fast and flipped rather dramatically” onto the street, Wood said in a phone conversation from the hospital as the mayor was being treated. She said that in the accident he blacked out, sustained a concussion, and bled a lot from a facial cut, as well as apparently jerking his back and body. 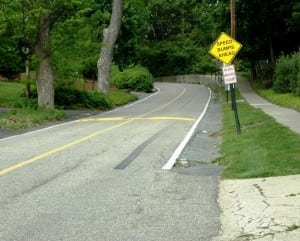 Initially, the hospital staff put him in body braces but a series of tests came back “negative” – meaning no hidden medical problems existed – and the braces were removed, Wood said. However, she said, he would remain hospitalized overnight. “He’s in good spirits, feeling terrible that he’s marred ‘ride to school day,’” Wood said. The accident “would have been a whole lot worse” had he not been wearing a helmet, she pointed out. “He’s going to be a helmet evangelist from now on.”

Occurring as school started, the accident caused a stir in the village and among Haldane students and parents and prompted rumors that a car had struck Gallagher – which both Wood and Saari confirmed was not the case.  “I was just dropping my kids off at Haldane and traffic was backed up, with weird patterns,” one mother reported. “As we finally turned into Craigside Drive the police were there in front of one of the houses on the north side and traffic was being angled.  There was a buzz of activity.  As we inched by my kids said ‘It’s Seth – his bike…’ I couldn’t look myself because of having to concentrate on the road.” After some traffic delays, “they opened up a way to get out other than that one,” she said. “I could hear the ambulance sirens as I headed off the campus.”
Alison Rooney contributed reporting to this article.