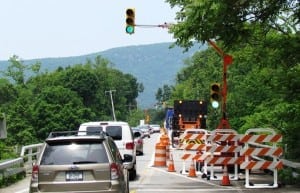 Despite a considerable amount of inclement weather in recent weeks, major maintenance on Indian Brook Bridge, located on Route 9D between Cold Spring and Garrison, is still expected to finish in July as originally planned, according to Jon Morucci, quality control/health and safety officer for Liberty Maintenance, the Youngstown, Ohio-based company undertaking the work.​

And there’s even better news for local drivers. The temporary traffic light and heavy equipment currently in place on top of the arched bridge will be removed sometime in June, signaling the return of two-way traffic – assuming the project continues in a timely fashion. “We’ve been losing about two days of work a week recently because of all the rain,” Morucci said. “You can’t paint in the rain.”

Bridges in New York State undergo major preventive maintenance every 10 to 15 years. An abrasive blast is used to remove all existing coating, rust and other impurities. The bare steel is then sprayed with separate layers of zinc, epoxy and urethane, which combine to protect the bridge from corrosion. In total, an estimated 3,000 gallons of the anti-corrosives will be applied by the time the Indian Brook project wraps up. Morucci said that work on the bridge’s two smaller of three arches is already complete – both the abrasive blast ​​and painting. Workers are now focusing their attention on the largest arch, which makes up the middle portion of the bridge. 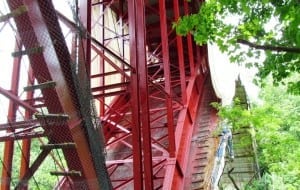 Underside of bridge with new coat of paint

As soon as the massive center arch has undergone the abrasive cleaning, Morucci said the heavy equipment and vehicles now taking up one lane of Route 9D can be moved beneath the bridge, once again enabling traffic to use both lanes. While he hesitated to predict an exact date, Morucci said the return to normal traffic should take place by about mid-June. Painting of the center section will be carried out from below with no further disruptions to traffic anticipated. Once painting is finished and the site is cleaned up, crews and equipment should be gone from the site for good sometime in July.​

Crews do not work on Sundays. Work is sometimes carried out on Saturdays in order to help keep the project on schedule but Morucci said that entails paying overtime which adds significantly to labor costs. The project is being managed and supervised by Liberty Maintenance but most of the workers are members of Structural Steel and Bridge Painters of Greater New York Local 806.​

Indian Brook Road in the area under the bridge remains closed to all but local residents until the project is completed.
Photos by M.Turton

2 thoughts on “Bridge Snafu To End This Month”