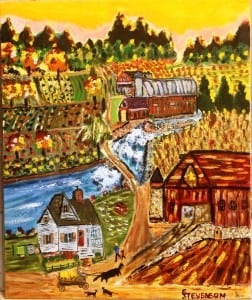 The paintings of Cold Spring artist George Stevenson are every bit as authentic and unique as his personal story. That story will unfold as part of an exhibit of Stevenson’s work at the Silver Spoon restaurant, beginning with an opening reception from 6 to 8 p.m. on Tuesday, July 3.

Stevenson grew up in Cold Spring in the 1950s and ’60s and was a star athlete. A talented football player, he still lays claim to the Haldane record for most pass receptions. After high school he worked for a local utility company before enlisting in the army — where he soon found himself embroiled in fire fights in the rice paddies of Vietnam. He survived gunshot wounds, the Mekong Delta and malaria. Awarded the Purple Heart, he returned to Cold Spring. 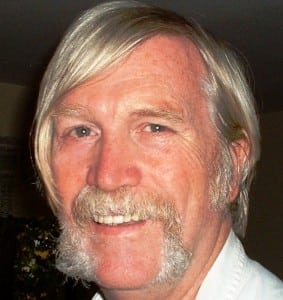 Stevenson may have survived Vietnam, but he suffered a serious stroke about a year after coming home to the safe streets of his village. It left him without the ability to speak. He lost the use of his right arm and right leg.

The timing was as unlikely as it gets — but that’s when Stevenson turned to artistic expression, initially as part of therapy. He took painting lessons in New York City and still does to this day. A natural right-hander, he learned to paint with his left hand. 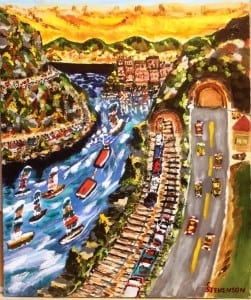 Stevenson’s paintings, done in a primitive, folk-art style, have evolved over the years. Initially, many dealt with the ravages of the Vietnam War, depicting helicopters, explosions, fire and casualties.  He lost many friends in battle, and he honors their memory by including images of them in some of those earlier works. As time passed, his paintings became much more settled in tone. Bucolic rural areas, colorful farm scenes and the Cold Spring waterfront were common themes. In many, Stevenson incorporates small likenesses of Lucky and Snoopy — his boyhood dogs.

The show, titled Heroes and Icons, is very aptly named. In Philipstown, George Stevenson is both.  The exhibit will continue for a yet-to-be determined period after opening night. The Silver Spoon is located at 124 Main St. in Cold Spring.
Photos by M.Turton

One thought on “Of Heroes and Icons”