The Cold Spring Village Board devoted a workshop to paperwork, pond rights, and protocol on Tuesday (July 17) and took initial steps to address questions of long-term parking on public streets. 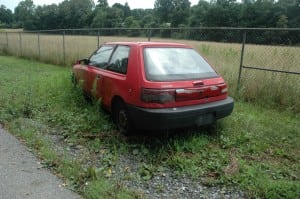 “Right now there’s no limit” to parking on streets, observed Mayor Seth Gallagher, who wants to remedy that. “The problem comes with people parking a car for four months and never moving it and we mow the grass around the car,” he said.

He cited as examples an apparently abandoned vehicle near the fence along Kemble Avenue and a trailer at the dead-end of The Boulevard. The trailer “just gets dropped down there and left. It’s like having your own little shed” on village property, he said. He recommended a ban on leaving unattached trailers (those not hitched to a car).

Trustee Bruce Campbell mentioned cars left for 10 or 20 days at the municipal parking lot on Fair Street, as well as trailers and vehicles elsewhere.

Along with banning unconnected trailers from streets, Gallagher proposed legislation, to apply to residents and visitors alike, to set limits on vehicle parking, with the possibility of a waiver fee, “maybe 25 bucks, 60 bucks” for those whose cars must remain for long periods. Even residents going on vacation and leaving their cars parked can cause problems, he noted.

In another traffic-related matter, he urged installment of a STOP sign on Mountain Avenue, at the crosswalk near Locust Ridge. The traffic there “affects kids going to school” and the goal would be to have the sign in place before classes resume for the fall, he said.

Gaba also walked the board through a series of remaining legal points regarding Jaycox Pond, located at the edge of Nelsonville, northeast of Cold Spring. Village officials are finalizing arrangements for access to the site; long-ignored documents indicate village ownership of pond-water rights. During periodic droughts “we go on the aqueduct system,” which supplies water to New York City and runs near the village, Gallagher noted. “The last time we did that was two years ago, when our Upper Reservoir pretty much went dry. We pay for that by the gallon. When we think about Jaycox Pond, it’s not the craziest thought that at some point we would need an additional reserve of water.”

The board also took up an ongoing concern — fractious public comment periods at meetings. At times, meetings end with members of the public shouting out allegations and questions to the board or with acrimonious exchanges.

“I think a lot of us felt at the end of the meeting last week [July 10] that it didn’t go well, that it was a little bit out of control and that it didn’t serve the needs of the board, and, I would say, ​the village at large,” Gallagher said. Public comment at the July 10 meeting featured lengthy​ allegations from three residents regarding conduct by the mayor and/or board. [See Ethics Allegations Again Roil Village Board Meeting.]

“What happened is you [as a board] sort of accept these chippings away of a basic right to conduct a meeting,” Gallagher said, proposing that they explore ways to improve the situation. “I think what we have to do is rein things in a little bit,” without getting overly formal. “Ultimately, hopefully you save time” for everyone at a meeting by not permitting verbal free-for-alls, he added.

Gaba advised that “it’s important that people attending meetings understand the difference between a public meeting and a public hearing. A public meeting is the board conducting its business in public. It’s not an opportunity for the public to comment or interject themselves into the board conducting its business.” Moreover, he said, “we’ve been having problems with the public not appreciating that they have to be recognized and adhere to the rules. But unless the board members are going to adhere to that and say, ‘Gee, we’re going to be strict about it,’ you’re going to wind up with problems like we’ve had.”

According to Gaba, board members also must refrain from questionable practices, such as calling out remarks or questions to the audience directly. “If we’re going to tighten things up,” he cautioned, “it really should be across the board. It shouldn’t just be in the public comment period.” For the public comment period itself, he suggested limiting individual comments to a set number of minutes and that at the start of each meeting the board offer a sign-up sheet for audience members who wish to speak.

Gallagher put out a yellow sheet, for attendees wishing to be heard that night. Two men signed up: Michael Bowman, who has previously accused Gallagher and the board of unethical behavior, and Andrew Hall, whose wife, Susan Peehl, lobbed similar claims on July 10 and who with Peehl has been critical of a neighbor’s shed-building project.

When the meeting wound down, Gallagher looked at the sign-up sheet. “We generally don’t have public comment at a workshop [but] the first request is to do more public comment,” he said, referring to Bowman’s request.

However, the board agreed to let Hall pose a question about a board decision earlier that evening to grant a Butterfield Library request for a reduction in escrow on a variance application. “Are you reducing the escrow to $100 for everyone?” Hall wondered. He also sought “to make an observation,” but Gallagher declined to hear it. The board did not discuss the matter and Gallagher gaveled the meeting to a close.

Bowman protested that he had been barred from speaking and that he like Hall had merely wanted to ask about an agenda item.

“We’re getting away from that kind of thing, where you come in and just have a discussion,” Gallagher replied, suggesting Bowman talk to board members elsewhere, send an e-mail or use a similar approach. “We’re all around. It doesn’t have to be at a meeting.”

“Can I have an off-the-cuff talk with the village attorney?” Bowman asked.

“No,” Gallagher responded. “We have to pay him.”

2 thoughts on “Village Board Considers Trailer and Other Parking Rules”