Town Board hears of fracking hazards 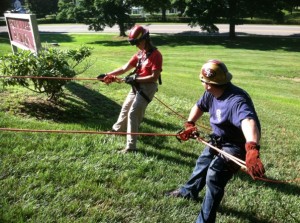 The realization of a vision for town-wide cooperation took center stage at last Thursday’s (July 12) Philipstown Town Board meeting, with news of the formation of an elite multi-fire-department rescue team.

Dubbed the rope-rescue team and open to members of the town’s four fire companies and two ambulance corps as well as other qualifying participants, the new squad has long been discussed and “is now starting to evolve a little bit more,” with finalizing of mutual aid agreements, according to Dan Valentine, of Cold Spring Fire Company No. 1.

Briefing the Town Board July 12, Valentine, the team’s acting captain, explained the mission: rappelling down steep mountainsides, crossing raging streams or plumbing the depths of collapsed construction trenches to find workers in accidents, as well as handling other perilous situations beyond the usual skills even of seasoned emergency responders.

“We’re trained to be firefighters and respond to burning buildings. This other stuff is completely extra. Some specific types of rescues, known as ‘technical rescues,’ are way above our current capabilities,” Valentine explained. “It’s a high-risk skill and low-frequency [demand], but we need to have the training for when it does happen. Our primary need for service is a rope-rescue team.” As examples of rope-team emergencies, he cited recent situations involving the overlook near the Bear Mountain Bridge, stranded hikers on a mountain ledge and a rescue along Route 301 in near-disastrous swift water from the 2011 hurricane.

“There’s no such team in Putnam County” or in southern Dutchess or northern Westchester counties, he said. “Putnam County seems pretty excited” about the new team, and “the state is very supportive,” though not in the sense of supplying money yet, according to Valentine. 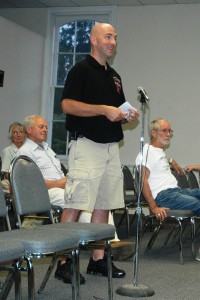 Dan Valentine announces the new rope-rescue team at the town board meeting. (Photo by L.S. Armstrong)

So far, he said, 48 individuals have expressed interest in the team and eight have the training; about a month ago, 22 recruits received certification in basic rope-rescue techniques. He noted that participants need not be firefighters because emergency medical technicians or members of the general public also are eligible. However, as they advance, they will need comprehensive training in such things as first aid, rope work and dealing with hazardous substances, Valentine added.

Along with finding personnel and funding — some training gets expensive — the team needs unique equipment, Valentine told the Town Board. Currently, each fire department has some resources but “we can’t do it by ourselves. These types of rescues are manpower-intense.” Initially, he said, each department will be the first to answer a call in its territory and then will summon the rope-rescue team and other departments’ equipment as needed. Eventually, though, the team should have its own equipment, readily available and portable, he said.

Philipstown Supervisor Richard Shea marveled at the skill already shown in the swiftwater rescue. “That was nothing short of heroic; that was life-and-death,” he said.

Town Board Member John Van Tassel, an ex-chief of the North Highlands Fire Department, thanked Valentine “for organizing this whole thing. We’re very fortunate to have you in this town.”

The Town Board also heard a presentation from Paula Clair on hydraulic fracturing, or “fracking,” to extract natural gas from the earth. She called on the board to pass legislation against the practice, a plea that met with a generally favorable response from Shea.

“As a citizen, I am very concerned with the process of hydro-fracking being started in New York State,” said Clair, who serves on the Philipstown Zoning Board of Appeals. Although Philipstown does not fall within the Marcellus Shale belt eyed for fracking, part of the New York City watershed is vulnerable, Clair said, “and we are not immune to effects” of fracking, either, she said.

The state could see 40,000 to 100,000 fracking wells altogether, bringing “a serious industrialization” of small towns and rural regions, she said. Each fracking well requires 8 million gallons of fresh water as well as 40,000 gallons of chemicals, with “some very toxic” mixtures, Clair said. “Once the water is fracked, it is irreversibly polluted and can never be used again.”

The residue can get “dried” and end up as road covering, creating more pollution when rain turns everything liquid again, she added. Moreover, “the wells leak and the chemicals get into the water” supply that way, she said, noting that fracking also is seen as a source of serious air pollution, which can spread hundreds of miles.

However, fracking is exempt from federal environmental laws, raising the question of why the fracking companies sought an exemption if fracking is not hazardous, Clair said. She also described as dubious claims that fracking brings substantial jobs to economically strapped communities, because many fracking companies rely on roving teams of their own workers, and that it provides energy for the United States, since companies can sell gas to the highest-paying customers, often in foreign countries. Yet fracking depresses tourism, ruins farming, undermines property values, erodes human health and takes a heavy overall toll on communities left in its wake, she said. Traditional, vertical tapping of natural gas underground does not pose the same threats, she said.

She enlisted the aid of Beacon City Council Member Sara Pasti, who added that fracking can have an adverse impact on Hudson River towns if the waste is trucked through the valley or disposed of in local facilities. Such possibilities prompted Beacon to adopt an anti-fracking law carefully written to allow natural gas pipelines to continue to supply fuel for Beacon residents, Pasti said.

“What I would like you to do is consider a fracking ban for the town,” similar to the Beacon initiative, Clair told the Philipstown board. Fracking “is very bad stuff.”

Shea scheduled a board workshop on the matter for Wednesday, July 18. “We’ve been following the process” of the debate, he said. “It’s good to get this out to the rest of the public. We’ll take this up as an issue.”

The Town Board also endorsed an application package compiled by Scenic Hudson for a local link in the proposed Hudson Fjord Trail, a pathway along the river, parallel to Route 9D, to spare pedestrians from having to walk on the narrow, often dangerous state highway. The Cold Spring Village Board had similarly backed the effort. As an element of the package, the ​town seeks grant money to develop a parking lot north of the village boundary, part of a plan ​​for taming the often chaotic parking situation “and getting people off the road,” Shea said.

Councilor Dave Merandy observed that the board had only received details the previous day, long after dissemination of the agenda. “How do we sidestep [the established process] for this?” he wondered.  “I don’t have any problems with this” as such, he said, adding that perhaps the agenda policy needs another look, “or you could say that anything just came up” and must be discussed at a meeting, he said.

“Some things need to be acted upon because of the time constraints,” as in the case of the application package, Shea answered.

Nancy Montgomery, another board member, said state law “clearly allows a lot of leeway” so boards can deal with urgent items.

The board then authorized Shea to complete the necessary paperwork for the application package.

Likewise, the board gave the supervisor the go-ahead to complete an agreement with the state for a $200,000 grant for a new boiler system at the Claudio Marzollo Community Center and replacement of doors and windows at Town Hall.