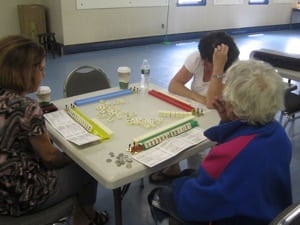 Mah Jongg players at the VFW. Photo by Alison Rooney

On Wednesdays around midday at the VFW Hall on Kemble Avenue in Cold Spring, one might hear what sounds like stones being polished in a tumbler, or hundreds of marbles repeatedly spilling on the floor.

To those in the know, it’s the familiar sound of mahjong tiles being shuffled. Between games, the players must move the tiles to mix them up, using large circular motions with both arms, resulting in the cacophony so often associated with this age-old, four-player game that originated in China (which is different from the matching game of mahjong solitaire).

Mary Schlich of Garrison has taught the American version of the game, known as Mah Jongg or simply “Maajh,” for the past six years through the Philipstown Recreation Department. Schlich started a Mah Jongg open-play session in Philipstown because she didn’t have anyone to play with while living in the area. After retiring to Florida for part of the year, a friend there taught her the game.

“She said she learned this new game, would I like to learn, and I love games,” Schlich recalled. “She taught me Mah Jongg, and I’ll be grateful every day of my life, because I love this game. And then I came back to New York, and I had nobody to play with, you know, because we’re snowbirds — we go back and forth. … So I thought, well, I’ll offer to teach, so I volunteered, and that’s how I got people.”

Schlich loves the game so much, in fact, that she taught the game to her family: siblings, children, daughters-in-law and grandchildren, so they can play during family get-togethers. She also regularly attends Mah Jongg tournaments, where enthusiasts play the game competitively for hours on end. In January, she plans to go with her sister to Florida for Mah Jongg Madness, which will consist of two half-days and one full day of play, complete with cash prizes for the winners.

When asked why she loves the game so much, she answered, “I guess because it uses your brain.” Reminiscent of the card game rummy, mahjong requires strategy and skill, with an element of chance thrown in the mix.

The standard Chinese version, while varying widely by region, generally involves creating melds (three or four of a kind and/or three numerical tiles of the same suit in sequence) and a pair.

Brought to the U.S. in the 1920s, the Amercian version of Mah Jongg developed with quite different rules and scoring. The National Mah Jongg League explains on its website (nationalmahjonggleague.org) that the American version differs in that it uses a card of Standard Hands, which is changed every April 1. Instead of making melds and a pair, one wins by creating one of around 30 different 14-tile hands shown on the card. Mah Jongg also employs joker tiles and the Charleston, a way of exchanging unwanted tiles with other players before play begins. Rules about ​​​​claiming discarded tiles also diverge greatly. Both do, however, require concentration and calculation throughout play. 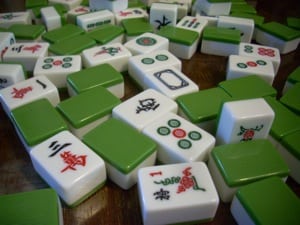 A Chinese mahjong set does not display Arabic numerals, as does an American set. Photo by J. Tao.

​​Because of its demands on one’s mental abilities, games like Mah Jongg are purported to stave off dementia and other memory difficulties, giving retirees like Schlich an added health benefit along with the enjoyment (and occasional cash winnings) of the game. Keeping the brain active, said Schlich, is not the main reason she does Sudoku or crossword puzzles, reads or plays Mah Jongg, but it is a beneficial side effect of these activities.

While Schlich now prefers more fast-paced play with advanced Mah Jongg players, she does teach newcomers when necessary. Many other players, like Julie Salisbury, a retired literacy teacher in Peekskill with great enthusiasm for the game, also help beginning players learn the ropes. The group meets on Wednesdays from 10 a.m. to 1 p.m. and ranges from one to three tables of play, with about eight players currently attending the sessions regularly. For more information or to purchase a 2012 Standard Hand card, contact the Philipstown Recreation Department at 845-424-4669, or just show up at the open-play session at 34 Kemble Ave. in Cold Spring.

One thought on “Mahjong Exercises Minds”