The Cold Spring Planning Board began the process of declaring itself the lead agency on the Elmesco application for a Dunkin’ Donuts franchise and convenience store operation at 33 Chestnut St. at a workshop meeting at the VFW Hall last Tuesday (Aug. 14) night. As lead agency the Planning Board would supersede other governmental agencies in determining the outcome of the proposal and the disposition of various issues that might arise during the examination of the project. 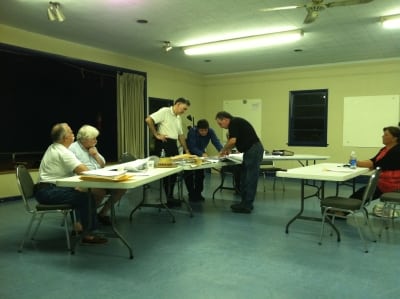 The process for lead agency designation involves informing other agencies of the intention and asking them if they have any objection or concerns. The other agencies have 30 days to respond before the Planning Board can proceed. This procedure, which can appear time-consuming and obstructionist to the uninitiated, is part of the New York State Environmental Quality Review (SEQR) law.

The tedium and detail of SEQR underscores the multiplicity of laws and regulations that can influence an application to change the use of a property whether in a large metropolis or a small village.

Although Kenny Elmes filed his application some months ago, it is only now that the Planning Board believes it has sufficient information to reassure other agencies — in this case, the Town of Philipstown, the Putnam County Health and Planning Departments, the state Departments of Transportation and Environmental Conservation — that first, they need not be worried about the presence of objectionable things of concern to their agencies, and second, they can rely on the Planning Board’s ability to mitigate lesser, if potentially troublesome, issues that might arise in cooperation with the applicant.

Joseph Barbaro, board chair, explained that many of the questions and observations by the Planning Board or its consultant, Rob Cameron of Putnam Engineering, are in the context of ensuring that a proposal not move forward only to be held up later because another agency has concerns or, even worse, objections. Cameron added he was currently involved in another situation where a project had moved forward quickly only to find a state agency had issues not considered in the process resulting in what he described as “quite a mess.”

One positive element for the applicant is that his proposal did not raise any immediate red flags that might appear on the radar of other agencies.

​​Only a passing reference was made to the Dunkin’ Donuts drive-thru aspect of the plan, which the board previously signaled was problematic for them and Elmes said was critical for him. There appeared to be an unspoken resolution to argue over that issue another day.

The lead agency designation, once certified, will empower the Planning Board to move forward more expeditiously, eventually leading to a public hearing and a final decision.

Tuesday’s meeting saw first a review of the Environmental Assessment Form (EAF) that accompanies a request for lead agency designation. The form (in this case the short one) filled out by the applicant, declares the status of a variety of conditions or the absence of a problem such as pollution of a stream or danger to wildlife. For the form’s approval the Planning Board must concur with the applicant’s factual assertions and the language used.

After taking the board and Elmes through a painstaking review with a lot of helpful and friendly back and forth, the board voted unanimously to send it and formally initiate the SEQR process.

The second part of the meeting was taken up with a site-plan review, which is at the heart of the Planning Board’s municipal function. This one involved discussion of many issues such as removal of a waste oil tank, the application of the appropriate noise-level regulations, the location of a proposed fence, the status of an easement for access to a driveway on the property and the turning radius of delivery trucks.

The process also involved close examination of different site map renderings with the applicant and board members often standing over the map together to reach agreement on the accuracy of a curb cut or other detail.

Although held in the VFW Hall in anticipation of greater public interest, only two citizens attended. This reporter confesses that at the two-hour mark, when the chairman suggested they call it a night but found the board thought some work should be done, he exited. He was not alone.

3 thoughts on “Planning Board Slogs Through Elmesco Proposal”