Mayor Seth Gallagher introduced “the concept of a law that would limit formula restaurants in the village,” and the board put the topic on its calendar for Sept. 18. Gallagher noted that any restrictions adopted would not affect a pending application — such as the current bid to turn the Elmesco car repair shop into a Dunkin’ Donuts franchise.

“Looking into the future, most likely there will be other types of restaurants applying to do business,” Gallagher said. “Do we want to consider limiting that in order to preserve the uniqueness of Cold Spring?”

According to the mayor, a law could be tailored to cover various types of establishments, but laws in other communities focus on restaurants. As he explained it, such legislation would not ban franchises or “big box” chain stores per se. “It’s not saying you can’t have a certain type of ownership,” but stipulating that an acceptable business “wouldn’t fit into a formula,” he said.

“I think fast-food restaurants are the biggest exposure,” Trustee Matt Francisco concurred, pointing out that development of the Butterfield property on Route 9D could draw such enterprises.

A formulaic-business law was only one of several weighty topics the board decided to take up next month. 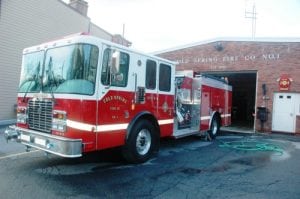 For Sept. 4, it scheduled a presentation on a potential new firehouse. Trustee J. Ralph Falloon, the board’s liaison to Cold Spring Fire Company No. 1, said that for six years he had been involved in efforts to consider the possibilities.

“We believe we have come up with a fiscally responsible conceptual plan,” he said. Wednesday (Aug. 15), Falloon confirmed that the idea involves use of the existing site, at Main and Church Streets. “It is just a presentation of a concept that I hope the rest of the board finds acceptable enough to consider serious enough to move forward,” he added.

On Sept. 25, the board intends to revisit the issue of coal-tar pollution at the Cold Spring Boat Club, underground contamination left from a 19th-century factory. The village owns the Boat Club property, and eradication of the contamination — with possible razing of the club building — was the subject of contentious public meetings in 2010 and 2011.

Trustee Bruce Campbell, a Boat Club member, said that a new treatment method available from a private firm “doesn’t require any excavation at all.” He acknowledged fears expressed in other areas that the treatment is akin to “fracking” — a controversial way of extracting fuel from underground — but said the method reportedly differs significantly from fracking. Campbell added that the New York State Department of Environmental Conservation, which manages coal-tar cleanups, wants to return to the village to discuss the matter.

During the portion of the meeting devoted to reports, Gregory Phillips, the water and waste-water superintendent, told the board that searches in July to find leaks in the clean-water system revealed ​​four, ​with the largest having already been repaired, “saving approximately 35,000 gallons per day.”

Two pressure-regulating valves were also repaired, saving another 7,000 gallons of water daily, Phillips said. He said the water department has created a schedule for rebuilding valves about every two-and-a-half years “to avoid future emergencies and get ahead of the curb.”

Phillips also reported near completion of work to replace the master control panel at the water treatment plant. “The resulting panel is again state-of-the-art and should yield years of efficient service,” he added.

In other infrastructure-related business, the board briefly discussed but did not finalize a choice of color for repainting the Village Hall’s exterior trim. The project is expected to begin Monday, Aug. 20.  “I think we can make a decision” by then, Gallagher predicted.

Before taking up the bulk of its agenda, the board unanimously approved “a resolution of recognition and celebration” for the 10th anniversary of the Junior Firefighter Academy, a children’s program run by the Cold Spring Fire Company.

The meeting again ended with a public-comment period, notable for its tranquility, in contrast to recent sessions full of acrimony and accusations from audience members. This time, citizens mostly posed questions about parking enforcement — both too much and too little.

James Hartford, an architect who lives on Furnace Street, said that for years the 5-hour parking limit there was ignored there but now is being assiduously enforced as homeowners’ cars get ticketed. “It’s quite a burden on our neighborhood,” Hartford said.

The mayor promised to review the situation but said he believes the police only enforce parking limits on side streets when complaints arise. “I think people who live along the street don’t mind not having that law enforced as long as you are not getting people abusing that [leeway] and parking all day,” Gallagher said. “You don’t want people to park there if they’re going to commute into the city.”

The press then asked if enforcement practices thus constitute unequal application of the law — one rule for commuters, another for residents. “No,” Gallagher replied. “The police don’t go around just ticketing a person who is in the city. They actually ticket everybody on the street.”

He also assured Main Street resident Lillian Moser of action on a problem she mentioned: vehicles blocking her driveway. The ban on blocking drives is “something we do want to enforce,” Gallagher said.

One thought on “Cold Spring Might Say No to Fast Food”