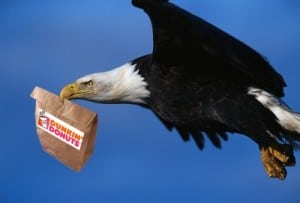 Bald eagles flew into the midst of the Cold Spring Planning Board’s deliberation of the Elmesco garage application to establish a Dunkin’ Donuts franchise and convenience store last Tuesday night (Aug. 21). The species, not actual birds, arrived via a letter from the state Department of Environmental Conservation (DEC), indicating the agency’s concern that modifications to the Elmesco site not threaten bald eagles, an endangered species.

The DEC letter to Joseph Barbaro, board chairman, did not cite a known threat or even the presence of bald eagles at 33 Chestnut St. The agency charged the Planning Board with making sure that there wouldn’t be any future threat as part of the board’s review of the application in its proposed role as lead agency under the State Environmental Quality Review (SEQR) law. The letter underlined the role of other governmental agencies in local development issues.

Board members and board engineering consultant Rob Cameron quickly agreed they could work with the bemused applicant Kenny Elmes to ensure safety for any bald eagles. The DEC referred the board to the U.S. Fish and Wildlife agency’s website for guidelines for protecting endangered species.

Eagle sightings have been a mainstay of the Hudson Valley for decades, particularly in winter when the region is a southern migration destination. But board members were perplexed by the suggestion eagles might nest (establish homes) especially in the vicinity of a busy commercial strip.

The DEC also expressed concern about the impact of any site modifications on the sewer system and referred the Planning Board to standards set by the Putnam County Health Department. Here again the Planning Board agreed the issue could be readily resolved by consultation with the Cold Spring Wastewater Department.

The DEC’s letter was in response to the board’s letter declaring its intent to become the lead agency in the Elmesco matter. The DEC indicated it was satisfied with the Planning Board assuming the lead role.

In each case the applicant will be expected to provide formal affirmation of either the absence of an environmental threat (to the eagles) or proof that the village wastewater department agrees there is no adverse impact. These items and many more will compose the Planning Board’s negative declaration as to environmental impact at the end of the process.

The board then continued its review of Cameron’s punch list of items he believes the board must address to further meet the requirements of SEQR as well as its own site plan review.

For nearly two hours, the board, Cameron, Elmes and his consultant Ronald Lezott, went over such details as the flow of storm water, removal of a waste oil tank, the glare level of proposed lighting, the positioning of a dumpster, the use of trees and other shrubs to lessen sound and light, and the use of an order board in the proposed drive-through that did not have a built-in sound system (as everyone agreed they are less noisy).

For the most part Lezott and Elmes were able to satisfy the board that mentioned items would not prove to be a problem. There were some sticking points, however.

Cameron and Barbaro questioned whether an existing rear door was wide enough to allow deliveries and discourage trucks from pulling in front to use the wider front door. “I know we might seem to micro-manage at times, but the goal here is delivery to the rear,” said Barbaro. Lezott said the door was adequate and the plans did not allow for a wider or new door. The parties agreed to disagree for the time being.

Board member Dick Weissbrod asked if Dunkin’ Donuts would consider altering the planned color scheme for its franchise, which includes its ubiquitous orange and pink brand accents. Weissbrod said he was looking for something “more in keeping with Cold Spring.”

Lezott replied that Dunkin’ Donuts very much cared about using its traditional brand colors and pointed out that nearby branded corporate businesses, FoodTown, Wells Fargo and Sunoco, were already displaying brand colors.

The Cold Spring Historic District Review Board has already approved the design for the renovated gas station building but did not opine on the color choices.

Weissbrod declared the issue a “deal breaker” for him. After the meeting he pointed to pictures proffered by board member Arnie Saari of two Dunkin’ Donuts franchises in Vermont that displayed much more subdued colors mirroring the nearby natural areas.

Mentioned only in passing was the Planning Board’s previously stated objection to a drive-thru window on the site. Elmes and Dunkin’ Donuts have insisted the window is necessary for business success. At a previous meeting they rejected a compromise wherein they would accept approval without it and apply for reconsideration after the site was converted. “We are glossing over the drive-thru issues for now, but we will come back to them later,” said Barbaro.  He said the board would be interested in the public’s views before reaching a final determination.

For now the board will be on hiatus for a few weeks on this issue while it awaits the responses of other governmental agencies on its intent to be lead agency.

Barbaro said the public hearing would be on Tuesday, Sept. 18 at 7:30 p.m. at the VFW Hall on Kemble Avenue.