The Village of Nelsonville plans to soon restore total ownership of Post 275  to the American Legion and void a 1989 agreement that allowed the village to claim the building if post membership dropped below 15 persons. 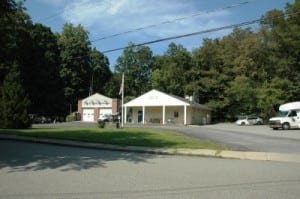 Nelsonville plans to give up rights to the American Legion site. Photo by L.S. Armstrong

At their monthly meeting on Monday (Aug. 20), Nelsonville Village Board members discussed the transfer of the Cedar Street property,  to be finalized after  the village lawyer signs off on a couple of legal questions. In July, the Village Board unanimously adopted a resolution agreeing to a legion request that the village re-convey the property “for the sum of $10” and authorizing Mayor Tom Corless to complete the deal.

Corless said that after membership increased in recent years, the military veterans organization, formally American Legion George V. Casey Post 275, sought to rescind the 1989 arrangement. “Since then they’ve grown significantly, and they were looking to get that overturned and put back the other way,” he explained.

Corless also reported that in a test, the village’s dry fire hydrant near Peekskill Road at Bank Street produced water initially and then failed to drawn an adequate flow. He said the hydrant, dug about 4 feet from the Foundry Brook streambed, was designed to rely on groundwater.

“We thought we had enough,” but in the testing, “it took between 4 and 6 minutes for the fire truck to pump 2,300 gallons out of there, and it was gone and just didn’t come back,” Corless explained. “It’s basically a swimming pool, a very small swimming pool. That’s not cutting it for us. When you’re sucking it out in four minutes, it’s not going to sustain any kind of flow.” To remedy the problem, “we’re going to have to breach into the streambed, so we get a flow going,” he told his fellow board members, Trustees Anthony D. “Ande” Merante and William Duncan.

The board heard from Village Clerk Pauline Minners about ongoing differences between Anita Desai, a Parsonage Street resident, and the Church on the Hill, otherwise known as the Cold Spring Baptist Church, located around the corner from her on Main Street. In a series of letters to the church, passed along to the Nelsonville board, Desai objects to the church’s daily steeple chimes, which strike hourly from 9 a.m. to 9 p.m. and play music at 12 noon and 3 and 6 p.m.  The steeple is in Nelsonville; Desai’s home is just across the village boundary in Cold Spring. 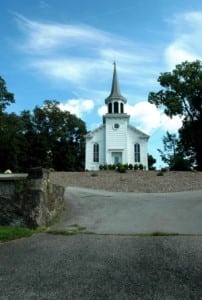 Chimes from the Baptist Church, or Church on the Hill, annoy a neighbor. Photo by L.S. Armstrong

“It is unfortunate that I have to write to you once again regarding the bells played at your church, their frequency and decibel level. You had assured me the sound would be reduced; instead it has increased exponentially,” Desai wrote in an Aug. 10 letter to the Rev. Tim Greco, the church’s pastor. “I would not have thought that striking every hour for 12 hours and playing tunes three times a day, seven days a week, would be acceptable to anyone. Certainly no other church in our village performs this routine. Nor did the Baptist Church in previous years.”

She noted that her house stands “on the same level and adjoining the church” and thus “is affected worse than any other.”

In another letter, dated July 3, she said that her repeated requests that the church turn down the volume “have simply been ignored. The chimes boom through my house like cannon from a fort.” Others who work nights and must sleep in the day and those who enjoy sleeping-in on weekends as well as visitors seeking tranquility also dislike being roused, she informed Greco.

She proposed Aug. 10 that the minister either visit her house or send a sound technician to check the volume when the songs play; or otherwise that the village government do a decibel test  “and see if it is of legal level.”

Corless promised that “we’ll look into” the concerns. He noted that “I don’t live anywhere near them, so I don’t know” personally how noisy the chimes may or may not be. He said the matter may involve interaction with both the Nelsonville and Cold Spring building inspectors. However, he added, noise control laws probably ban constant, unrelenting noise — not sounds coming periodically, such as music played three times a day.

Greco told Philipstown.info Tuesday evening “we are looking at all our options” in regard to the situation. “It’s sad; they have become increasingly threatening,” he said of the letters. According to the pastor at the Church on the Hill, “no, we never promised” to reduce the volume of the chimes, “but as good neighbors we did.” Greco (who also works as a reporter for the Putnam County News & Recorder) said the thrice-daily musical selections feature hymns as well as patriotic tunes and seasonal Christmas carols.

In other business, Merante continued his pleas for village action to deal with trees whose branches interfere with power lines or whose roots undermine sidewalks. “I think we’ve got to start working on this. A couple are really dangerous,” he said.

Money may be an issue, Corless responded. “We can’t go chopping down trees and doing sidewalks if we’ve got bigger issues” to address, he said.

After discussion, the board agreed that Merante should ask a couple of tree-care businesses for cost estimates for work on several streets and also contact Central Hudson Gas & Electric about cooperation with its tree-trimming operations.

9 thoughts on “Nelsonville Board to Restore Legion Full Ownership”