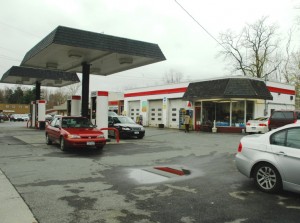 This week’s Cold Spring Planning Board public hearing on the application to establish a Dunkin’ Donuts franchise and a convenience store at the Elmesco service station on Chestnut Street (Route 9D) is expected to draw a large audience.

Fevered expressions of outrage at the prospect of a global fast-food franchise disrupting the delicate harmony of village life are anticipated to be matched by full-throated support for a property-owner’s and long-time merchant’s rights with perhaps some appreciation for inexpensive, readily available coffee and donut variety in the bargain.

The meeting is scheduled for Tuesday, Sept. 18 at 7 p.m. at the VFW Hall on Kemble Avenue. First the Planning Board will formally adopt its role as lead agency in the matter presumably having heard no objections from other agencies.  Then the board will hear from the public.

It is impossible to predict how many people will actually show up for any particular event, civic, cultural or sporting.  The demands of work, school and family have a way of distracting people from the public realm.

When the proposal first surfaced there was undeniably substantial chatter against it and calls for an organized protest that so far has failed to materialize.  Still there is evidence that many people, especially local merchants and some residential neighbors, are still opposed.

Conversely, there has been commentary on the Philipstown.info website defending the right to build the business and questioning the assumption of its possible ill effect. A recent PCNR headline suggested growing support for Kenny Elmes, the owner of the station, and his proposal. But just how that support is made manifest or even what support might mean in this circumstance was not made not clear in the their story.

Except for the first few meetings, the deliberations of the Planning Board have been sparsely attended. Perhaps the main cause is the Planning Board’s narrowing of its scope from a broader consideration of the potential impact and precedent of an international food chain on the commercial and residential life of the village to the more prosaic details of traffic flow and safety.

When the Planning Board first sat to consider the application in April, chairman Joseph Barbaro opened with remarks that clearly reflected a deeper concern about the impact of the project beyond traffic, although traffic was also raised by him and other members from the outset.

Barbaro referenced the village’s comprehensive plan and the need to closely adhere to its direction as well as the potential for precedent an approval of Dunkin’ Donuts would set for proposals for similar businesses such as McDonald’s.

But also during that April meeting member Arnie Saari questioned the board’s authority to consider, let alone object to, the project on the grounds it involved a chain, franchise or as some prefer, formula business. He also questioned, as others have since, whether the comprehensive plan had language authorizing such a consideration or objection.

The answer appears to be no.

That perspective is drawn from the subsequent meetings of the Planning Board in the aftermath of the chairman’s request to village counsel, Steven Gaba, for an opinion on the board’s scope on the matter.  Barbaro has made clear more than once that the board’s primary concern is traffic and related safety matters. Without directly referencing Gaba’s opinion, the Planning Board has pulled in its horns.

Philipstown.info’s formal freedom of information request to review Gaba’s opinion was denied by Gaba himself, who claimed attorney-client privilege prevented its disclosure. That the person who writes an opinion that influences decisions of consequence can also rule on whether it should be accessible to the public is an interesting issue.

Villages, like other governmental entities, must abide by their own written laws and rules as well as county, state and even federal laws governing various activities. Accordingly, reliance on legal advice becomes a necessity before acting to avoid the burdensome expense of litigation in the aftermath.  Such reliance, however, can morph into a form of de facto policy making at times.

In the first round of the Butterfield development issue, when things seemed too contentious in the public realm, Gaba suggested during a well-attended public meeting that discussions might be more beneficial in a “less fraught environment.” The next day the developer Paul Guillaro withdrew his application.  Since then consideration of the project has begun anew, without the formal filing of an application, allowing, one presumes, for more informal conversation between officials and developer as needed.

All about the drive-thru

The introduction of a drive-thru window for ordering Dunkin’ Donuts products is now the Planning Board’s primary focus.  At its July 31 meeting Barbaro asked Elmes if he would be willing to consider a compromise wherein he received conditional approval with the drive-thru held over for later consideration. Elmes and Dunkin’ Donuts rejected the offer declaring the drive-thru critical for the success of the business.

Testimony for or against this proposal that hones in on the drive-thru window will arguably be the most effective in influencing the final vote of the Planning Board.