Paul Guillaro of Butterfield Realty LLC returned to the Cold Spring Village Board at its workshop Tuesday (Sept. 25), after meeting with resistance from the Historic District Review Board (HDRB) in a workshop last Wednesday (Sept. 19). He brought up the issue of expediting the rezoning of the site and asked the Village Board to step up and take charge of the situation. 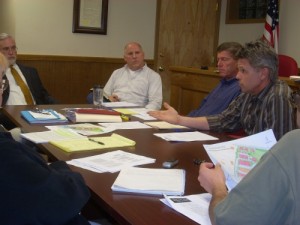 Mayor Seth Gallagher speaks at the Village Board workshop as Trustees Matt Francisco, center, and Bruce Campbell listen. Chuck Hustis looks at the Butterfield site plan in the foreground. Photo by J. Tao

An audience of about 20 gathered for this segment of the Village Board workshop, perhaps expecting to see fireworks from a frustrated Guillaro. After resubmitting a plan early this summer to develop the Butterfield property that reflected improvements from an earlier, withdrawn project, Guillaro met with hesitation from the HDRB concerning his plans to demolish the hospital building. When last week he finally agreed on the possibility of keeping the original 1925 part of the defunct hospital, the HDRB was split on whether the 1941 part should also be retained.

Declining to meet again with the HDRB, he decided to come before the Village Board to find out whether the plan had any hope of success in their view. He began with a request to continue with a zoning change for the property. “I need to make a decision on whether to move ahead with the temporary lease for the post office,” he began. “I cannot sign it unless I know I can accommodate them with a permanent location.” He explained that he did not want to sign the lease if he could not get the rezoning for the property to house the post office.

In order to house the post office and intergovernmental municipal offices, along with a senior-citizen center and retail-commercial space as well as market-rate condominiums for retirement-age buyers and single-family houses, the site would have to be zoned to include commercial and municipal uses, which its current B4 status prohibits. 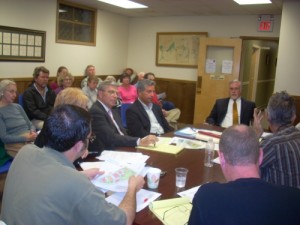 Guillaro continued with a statement on his position, exhorting the Village Board “to take a decisive leadership role, exercising its authority, and act on the rezoning of the property, and to also create a reasonable schedule which all of the boards will follow so that the project can be completed in a timely fashion.”

He gave some history of the situation and asked for some willingness from the Village Board to continue with his redevelopment project: “You know, I started this process about 10 months ago, stopped after 5 months, came back after 2 months. I need to move ahead at least with the rezoning so I could at least see that there is some goodwill and that the village really wants to do this. … I want to get your feeling on whether this is going to happen or not, or whether I should just proceed with something under the existing code.”

Richard O’Rourke, Guillaro’s legal representative, added that they did not see why the Village Board could not go ahead with rezoning now, especially since the post-office relocation is a pressing issue. The post office’s current lease in the Foodtown plaza expired at the end of July, but they have received an extension until around the end of November. According to Mayor Seth Gallagher, Foodtown has already submitted an application with the Planning Board with plans for the space, so the post office will have to move by then.

Gallagher clarified that the special Butterfield committee was supposed to work through the issues of Guillaro’s plan but that it had “gotten hung up on the demolition of the hospital.” Steven Gaba, the village’s attorney, recommended that Guillaro and O’Rourke come up with a draft local law indicating the desired uses, which would then be referred to the Planning Board, as required by the Village Code, and possibly to the Putnam County Department of Planning for review and comment as well, and then hold a public hearing on the plan. Gallagher asked that they submit the draft to Gaba, who would then share it with the board.

In the aftermath of the meeting with the HDRB last Tuesday (Sept. 18), in which the two boards clashed over what constitutes “historic character” in the context of the demolition of the Butterfield hospital, the Village Board spent a good deal of Tuesday’s workshop discussing the sections of the code that deal with historic character. The discussion was partially held to prepare all board members for the next meeting (on Oct. 2) with the HDRB and Julian Adams, an expert from the New York State Office of Parks, Recreation and Historic Preservation.

Gaba explained that at the last meeting, the HDRB “said that they had reservations about my view of the code.” That view was described by Gaba in detail: “What the code means by historic character is the unique and distinctive architectural heritage of Cold Spring, particularly 19th-century Hudson River architecture,” as described in Chapter 64, which explains the purpose of creating the historic district as preserving structures with such architectural characteristics.

Gallagher further explained that the HDRB was using different criteria set out by the code for the designation of a landmark or expansion of the historic district (in particular the one about being “identified with one or more historic personages”), which is separate from those for the issuance of a certificate of appropriateness (COA) that is required for a building project to proceed. While Gaba admitted to seeing where the HDRB was coming from, he and Gallagher agreed that, according to the code, the determination of appropriateness of a building project depends upon architectural features.

The board therefore looked forward to having Adams at the next meeting to help them understand the code. “Mr. Adams has been working with the (HDRB) in the past, he’s familiar with our code, and they felt they’d be a lot more comfortable with what I was telling them if they came down and could ask some questions and get some input from him.” While Adams would not be able to solve the problem of code interpretation, Gaba expressed hope that he could “help the two boards come to some sort of understanding as to what the code means and how it should be interpreted.”

Besides advising that the code define “historic character,” Gaba also made some recommendations for revising other parts of the code, in particular adding an appeals process, eliminating or modifying a one-year waiting period for issuance of a certificate of economic hardship (COEH), and taking out a claim that altering a building without either a COA or COEH is equivalent to disorderly conduct.

Gaba also presented on what is involved in creating a provision excluding formula restaurants from a village or parts thereof, as had been suggested in previous meetings. A lengthy memo described cases of villages enacting such zoning regulations and why the laws were upheld or struck down.

In creating such a law, Gaba cautioned, a village would have to prove first that there was a legitimate health, safety or welfare purpose for the special zoning, and second that the village used rationally calculated means or methods to find that the excluded type of business would cause those health, safety or welfare concerns. In the cases where the laws were struck down, the village did not provide adequate documentation that the excluded business type would be a cause for the concerns put forward.

Trustee Matt Francisco asked Gaba about the feasibility of enacting such a zoning provision in Cold Spring, as the board expressed interest in pursuing the exclusion of, at the very least, formulaic fast-food restaurants. “Well, Cold Spring’s pretty unique,” Gaba responded. “You have most of the entire village in a historic district. Traffic is limited; parking is limited. It’s the kind of thing I would definitely think about. You’d have to be very, very careful in how you proceed … and you want to make sure you dot your i’s and cross your t’s.”

The board then agreed to ask the Comprehensive Plan Special Board whether there would be any people interested in conducting voluntary studies on the issue to begin gathering information.

2 thoughts on “Guillaro Asks Village Board to Take Decisive Role”