A first for the Depot Theatre

The full cast of singers and actors has not yet assembled for a full rehearsal of John Gay’s The Beggar’s Opera, soon to be seen at the Depot Theatre, but another assemblage of players convened there this past Monday (Sept. 24): the nine-person orchestra that will perform the 1728 ballad opera come the end of this October. 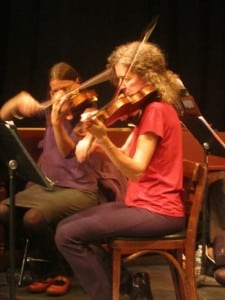 Violinist Rachel Evans at the first rehearsal of the orchestra. Photo by A. Rooney

In a first for the Depot Theatre, where the small confines of space and budget usually dictate that accompaniment for musicals is all wrapped up into one digital keyboard, nine leading period-instrument musicians will perform on eight instruments at each of the nine performances.

Inspired by an idea of his friend Jonathan Swift, and assisted by no less than Alexander Pope, a struggling writer of poems, fables and plays named John Gay secured a permanent place in theater history when his revolutionary piece, The Beggars Opera, opened in 1728 and became the talk of London and the longest running stage work in the English theater.

Gay created enduring characters that have “not one decent man or honest woman among them,” and set his lyrics to popular ballads and folk songs to counter the stuffiness and rigidity of the formal operas that dominated the London stage, many written by Georg Friedrich Handel. Ironically, Gay studied with Handel before dipping his pen into satiric, bawdy ink and drawing the thieves, highwaymen, and the ladies they consorted with — a welcome change from tedious plots of Greek and Roman court intrigue and the occasional fairy — that have been re-created so often by writers and musicians such as Berthold Brecht, Kurt Weill, Vaclav Havel and Benjamin Britten.

In fact, since the original orchestra parts are long lost, every serious revival requires a unique reconstruction of the score, which may explain why productions are rare. Rachel Evans, a Garrison violinist, recruited the other players, all prominent performers of period music, with whom she has worked previously. She said the mix of English country dance and folksongs “makes a case for English music (of the time). For myself, I’ve heard of The Beggar’s Opera for years, but I’ve never had the opportunity to play it.” 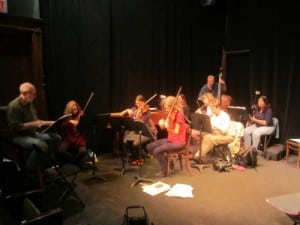 Getting the musicians together alone proved to be a very good idea, as discoveries and revisions were made even while the rehearsal was going on. As Leon Schelhase, one of two harpsichordists (along with Kelly Savage, who will alternate with Schelhase due to scheduling conflicts), explained, “Three of us, the harpsichord, double bass and bassoon (playing from the cello part) are taking little bits from all available parts and reordering it for an 18th-century sound. We are used to reading off the bass line, but we don’t have it. So right now the three of us are reading from the same part, and we all have lots of figuring out to do.”

To this the double bass player John Feeney, a principal with the Orchestra of St. Luke’s, added, “Also, the registers, orchestrating which octave sounds best. Our keyboardists, Leon and Kelly, are exercising good judgment, telling me when not to play.”

Schelhase expanded upon the challenges at hand: “Other people have reconstructed this in the wrong way, or in a different way; for instance if it is being done in a big venue it often is done in an overblown style. But we are pretty much a band of players who are specialists in period instruments. We play music from the time of Handel in the manner it might have been played then.”

This rehearsal was also about discovering the finer points of playing together, as an ensemble, casting an eye and an ear on such vital matters as the synchronized bowings for violinists Evans and Kate Light and violist Boel Gidholm and elegant articulations by flautist Anne Briggs, oboist Virginia Brewer and bassoonist Elisabeth Romano. Many of the musicians were impressed with the sound and acoustics inside the small theater. Evans, who, along with violinist Light had performed there before, said the music sounded “fantastic — it’s perfect, we sound like an orchestra in there; it’s orchestral.” 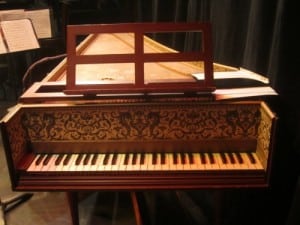 The harpsichord. Photo by A. Rooney

To add to the challenge, the orchestra parts arrived from the publisher without a conductor’s score, which is apparently lost, too. Fortunately, a skilled Philipstown musician, Chris Hughes, is using a computer program to create one, which the harpsichordists, bass player Feeney and bassoonist Romano will use to re-create their authentic lines as well. But it’s a long note-by-note, measure-by-measure process, and the last several numbers were picked up at Grey Printing just before the rehearsal.

Their lunch break over, the group assembled again, and music director/conductor Gordon Stewart, who is also staging the work to make “the world’s first musical” more of a unified whole, picked up the pencil he was using for a baton and suggested to the eight musicians: “Let’s take it from 19 — at a vigorous clip. It’s in three, but you don’t need a whole measure to start perfectly … so two, three …”

And as they began playing all-out, all together, it didn’t faze anyone that even the conductor was reading the full score for the first time. With these musicians, the hit of 1728 sounded gorgeous in the Philipstown Depot Theatre, soon to be The Beggars Opera’s latest temporary home. Such spirit might have impressed John Gay, whose inscription on his tomb in Poet’s Corner at Westminster Abbey is taken from The Beggar’s Opera: “Life is a Jest, and all Things show it: I thought so once and now I know it.” 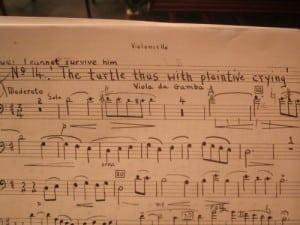 Section of the score for Viola de Gamba. Photo by A. Rooney

The Beggar’s Opera will be performed Fridays through Sundays, Oct. 26 through Nov. 11, Fridays at 7 p.m., Saturdays at 2 and 7 p.m. and Sundays at 4 p.m. All tickets for the first weekend are $20. Thereafter tickets are $25 for adults and $20 for seniors and children and are available at brownpapertickets.com or by following the link at the Philipstown Depot Theatre site.

There will be a special opening-night, benefit cocktail reception, with a chance to meet the actors, director and musicians, on Saturday, Oct. 27 from 4:30 to 6:30 p.m. at the Garrison Art Center. Tickets to this reception, which may be combined with either the matinee or evening performances, cost $75 per person. Tickets are available as detailed above for regular performances.

Kelly Savage (harpsichord) performs frequently as a soloist, continuo player and chamber musician, recently working with many New York City-based groups. She plays regularly with her own chamber groups Biber Baroque, SIREN Baroque and is co-founder and music director of the newly formed orchestra Vilas Baroque. She is the organist and choir director at St. Stephen and St. Martin’s church in Brooklyn, New York.

Leon Schelhase (harpsichord) is a recipient of the American Bach Soloists’ prestigious Goldberg Prize and has performed in Boston with various groups, including Cambridge Concentus, an ensemble specializing in the music of Bach, and of which he is a founding member. He currently resides in Philadelphia but performs in early music ensembles locally and throughout the East Coast. Leon is currently on faculty at the Curtis Institute of Music.

John Feeney, principal double bass of the American Classical Orchestra and the Orchestra of St. Luke’s, also appears as principal with the period instrument groups Opera Lafayette and Sinfonia New York. A chamber musician and soloist of international renown, he won first prize in the Concert Artists Guild and Zimmerman-Mingus International Competitions and was a medalist-prizewinner in the Geneva and Isle of Man Competitions. In 2010 John co-founded the Serenade Orchestra and the Serenade Quartet both featuring music from 18th- and 19th-century Vienna.

Boel Gidholm has performed throughout Europe and the U.S. as a baroque violinist and violist, working with several early music ensembles such as Ensemble Aperto (Germany), the New York Collegium, ARTEK, Pegasus Early Music, NYS Baroque and Ars Lyrica Houston. She lives in Rochester, N.Y., with her husband, Christopher Haritatos, with whom she co-directs Publick Musick, performing and presenting period-instrument concerts in the greater Rochester area.

Rachel Evans (violin) has been a member of the Santa Fe Opera, the jazz group String Fever, the contemporary music ensemble Continuum, and the Meridian Quartet. On period instruments, she has performed across the globe with medieval ensembles. She was a principal player and recitalist at the Carmel Bach Festival for many years and appeared at the Boston, Berkeley, and Utrecht Early Music Festivals, and the Victoria Festival in Australia.

Violinist Kate Light has been a member of the orchestra of the New York City Opera for over 20 years. She has also performed with many local orchestras and ensembles. She has been on the faculty of the Mannes College of Music and the University of Miami in Florida. Also a writer, she is the author of three volumes of poetry and is currently on the faculty of Hunter College.

A native of California, Virginia Brewer has enjoyed a long career as a soloist and chamber musician performing on both modern and historical oboes. As a baroque oboist, Brewer is a regular member of the Brewer Ensemble and appears as a guest artist with various organizations in New York City and elsewhere. Brewer has been affiliated as principal oboist with the Bach Vespers series for more than 30 years.

Elisabeth Romano (bassoon) has played as a member with Rochester Philharmonic, San Antonio Symphony and Toledo Symphony Orchestra and has performed with many orchestras and ensembles in New York and New Jersey. Her reed making company, Reed Expertise, is a leading manufacturer of handcrafted bassoon reeds. Elisabeth is on the faculty of Bard College, Vassar College and the Mountain Laurel Waldorf School.

Anne Briggs has performed on baroque, classical and modern flutes with groups such as the Aulos Ensemble, American Classical Orchestra, New York Philharmonic (for 20 years as regular “extra”), American Symphony (at Bard), Orpheus, and is principal flute with Sacred Music in a Sacred Space, Oratorio Society and Musica Sacra.