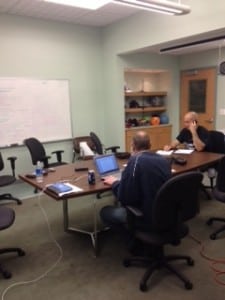 Philipstown officials have opened the town’s emergency operations center (EOC), Town Board member Nancy Montgomery told Philipstown.info. The EOC is located at the North Highlands Fire Company on Fishkill Road just down from the Route 9 intersection. Town Board member John Van Tassel and Putnam County emergency coordinator for Philipstown, Ralph Falloon, have set up the operation. They will likely be joined there by Town Supervisor Richard Shea and Montgomery as well other officials from the town, county and the fire companies as needed.

From the EOC, officials, using phones, computers and personal contact, can monitor storm conditions, coordinate responses to emergencies, and receive and share the latest info on aid and other resources from state and federal agencies.

The consensus among officials and forecasters is the storm will hit our area hardest between 7:00 p.m. and 7:00 a.m. tomorrow (Tuesday) morning, making a bad situation worse with darkness combined with likely power failures. The storm effects are expected to linger throughout Tuesday with continued wind and rain.

There are already reports of power outages in and around Philipstown.

Residents can call the EOC to report road conditions and other non-emergency situations they believe officials should be aware of. The number is 845-265-7285.

“People should stay in their homes during the event if at all possible,” said Montgomery. “If a home becomes compromised or there is some other emergency, then they should call 9-1-1.”

Effective midnight, Tuesday, town officials have also opened the town’s recreation center on Glenclyffe Drive off Route 9D in Garrison as a comfort station complete with hot showers. Residents considering a move there can call Amber Stickle at 845-380-9780.

Shea said the town government would be open on Tuesday morning.

The supervisor said he was also speaking regularly with Central Hudson officials who have crews standing by in anticipation of power outages.

The North Highlands Firehouse will serve as one of the four places residents can seek temporary shelter and/or assistance. The town’s volunteer fire companies usually prepare to remain open to provide immediate shelter, water, heat, electrical power and a snack.

Montgomery said the county BES and the Red Cross would be assessing the situation and make a determination about setting up a more elaborate shelter to house people.

Residents seeking shelter should know the fire companies are not set up as live-in shelters and cannot provide beds, showers, etc. 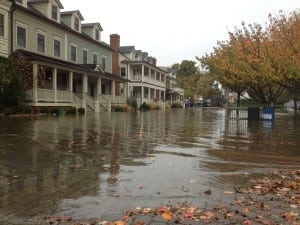 All fire companies, Cold Spring, Garrison, North Highlands and Continental Village have confirmed that they will be operational for the storm.

“We’re ready to go; we’re just waiting for the storm,” said Bill Rimm, newly elected chief of the Garrison Fire Company. Rimm said that all equipment has been thoroughly checked in the past few days and that members of the fire company are on alert. “We’re readier than ready.”

While the Garrison fire hall on Route 9 will not operate as a shelter, Rimm said it would be available to the public as a comfort station during the height of the storm. “People will be able to come in to recharge their cellphones, use the restrooms and the like, but not showers.”

Rimm said that county officials have requested residents along the Hudson River at Manitou Road and Hudson River Lane to evacuate in anticipation of flooding due to high tides and strong winds.

Continental Village Fire Department Chief Charles Valt reported early Monday afternoon (Oct. 29) that the firefighters were preparing to go on standby status. “We will start our standby at 3 p.m. today,” he said in an email. Meanwhile, firefighters had been “prepping all pumps, trucks, and chainsaws, filling fuel tanks,” and readying food for the standby. They also met Sunday afternoon with Putnam County Executive MaryEllen Odell and town and other local officials and have been receiving information from Odell’s office regularly as well as from other officials. The cooperation and updating so far “has to be the best I have seen in a long time,” Valt added.

At Monday’s noon high tide, the Hudson River was already flooding the roadway around the Cold Spring dock area. Police have closed the road leading into the riverfront area just opposite the entrance to the Metro-North train station.

Cold Spring Mayor Seth Gallagher has requested a voluntary evacuation of homes west of the railroad tracks. Some residents could be seen putting up sandbags along front porches. A few told Philipstown.info they were headed for hotels in Fishkill.

Gallagher and other officials have warned that road crews and fire companies cannot be called upon for pumping and other services during the duration of the storm as they must be available for emergencies.

Gallagher said late Sunday afternoon (Oct. 28) that village officials had taken a number of steps in expectation of the hurricane. For example, he said, they had opened valves on the Upper Reservoir and Lower Reservoir Dams, on Foundry Pond Road, in North Highlands, to prevent excess water levels when the storm hits. “You don’t want them to get so high they’re coming over the sides” instead of through spillways designed to channel the water into Foundry Brook, he said.

The Upper Reservoir Dam and Lower Reservoir Dam (sometimes called the Middle Reservoir Dam, because the village has a third, lower-most reservoir and dam at the water treatment plant), serve the fresh-water system for Cold Spring and Nelsonville.

The water treatment plant, on Fishkill Road, “is definitely secure” and residents should not worry about disruptions in their tap water, he said. “The water should continue to flow. That shouldn’t be a problem.”

“We’ve tried to seal and sandbag around the West Street pump station,” Gallagher said. Part of the wastewater collection system, it can be vulnerable to flooding. Both the village Highway and Water-Wastewater Department crews had been working on Sunday, preparing for the hurricane.

Work undertaken as of Sunday afternoon included clearing storm drains and removing leaves from such streets as Main and Northern Avenue; making sure Back Brook, the little creek that runs through the village, and stormwater culverts and paths are clear, and otherwise getting ready, he said.

Gallagher also said the he and Trustee Ralph Falloon and others continue to monitor the situation and that he would confer with various personnel in meetings starting shortly after dawn on Monday, Oct. 29 to assess ongoing conditions.

I-84 closed at the Connecticut state line.

The Taconic north of Pudding Street has a tree across all lanes.

Both Haldane and Garrison schools have announced they are closed on Monday and Tuesday, Oct. 29-30.

Scenic Hudson closed all its parks, effective Sunday evening (Oct. 28), citing the expected high winds and coastal flooding forecast for the Hurricane Sandy mega-storm working its way up the eastern United States. The organization issued a statement that promised, “After the storm passes, we will inspect all parks for damage and reopen them as soon as we can determine they are safe for our visitors.” It asked the public to monitor its Facebook page for updates.

Debris from last night’s high tide (11:35pm) left at the waterfront in Cold Spring shows that water has already overrun the banks. Photo by C. Simek

High tide at the corner of Main Street and West Street. (12pm). Photo by C. Simek

Stephanie Gallagher, with the help of friendly neighbors, tapes and sandbags the front door to her home at 22 West St. She and her family are headed to a hotel in Fishkill to wait out the storm. Photo by C. Simek

The Hudson River spills over the waterfront at high tide, 12 p.m. on Monday, Oct. 29. Photo by Jeanne Tao

10 Main Street, next door to the Hudson House. Photo by C. Simek