Nevertheless volunteer emergency responders out through the night 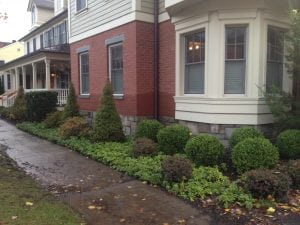 Philipstown was lucky compared to much of the lower Hudson Valley region, New York City and New Jersey. Hurricane Sandy, one of the most destructive storms in history, only delivered a glancing blow here with minimum damage and some power outages.

As of 9 a.m. Tuesday, Oct. 30, major roads were open. However, residents may find roadblocks at a few local intersections due to fallen trees or branches.

Philipstown officials monitored storm activity and impact throughout the night from their emergency operations center (EOC) at the North Highlands Fire Company. The general reaction was that locally we had avoided much of the predicted impact.

“The biggest problem we had overnight was the flooding in the low-lying areas, at the Hudson River in the Village of Cold Spring and on Hudson River Lane (Manitou), where we had some evacuations by boat,” said John Van Tassel, Philipstown Town Board member and coordinator at the EOC.

The Sheriff’s Department and the Garrison Fire Company conducted the late-night water rescue and evacuation in Manitou.

Town Supervisor Richard Shea and a team of officials were down in Manitou this morning evaluating the situation, Van Tassel said.

Another flooded house on Route 9 just north of the Annsville Circle also required an emergency response and rescue.

Van Tassel emphasized the hard work and dedication shown by the volunteer fire companies throughout the night. “Can’t say enough about them.”

Some of the rescued residents sought shelter at the town’s Recreation Center on Glenclyffe Drive off Route 9D in Garrison, according to Amber Stickle, director of the center. “At peak we had 11 people here; six people spent the night,” she said. Stickle said the center would remain open until at least 4 p.m. Tuesday. The number there is 845-380-9780. 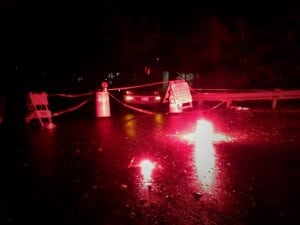 In Cold Spring the fire company and village officials wrestled with a severely flooded lower Main Street area. Power had to be cut off to the neighborhood as responders sought to begin to pump out the streets. Many residents had already evacuated the area in advance of the storm.

Putnam County officials have reported disruptions to the 9-1-1 emergency line. Residents are encouraged not to use the  line unless a real emergency is in progress. Callers who do not connect to a dispatcher should call the Sheriff’s Department at 845-225-4300.

Central Hudson, the area’s utility, reported 82,000 customers without power, but only 2,700 were in Putnam County. Power appeared generally on in the villages, with scattered reports of lost power in the more rural areas of the town. Central Hudson’s website maintains updates of the power situation and other information related to electrical services.

The utility announced it was making dry ice available to residents who have lost power. The nearest pickup point for Philipstown customers is the Home Depot parking lot in Fishkill on Route 9. The operation will be open from 11:00 a.m. until 6:00 p.m.

Water reached Lower Main Street at Market Street around 11:40 p.m. Monday, near high tide. The new dock lights can be seen submerged in the distance. Firefighters waited to shut off power before entering water. Photo by J. Tao

Water at Market and Main around before midnight and high tide Photo by J. Tao

Hudson River waves can be seen in bandstand lights before midnight, near high tide. Photo by J. Tao