HDRB expected to issue a decision on demolition Dec. 19

In a three-hour public hearing held by the Cold Spring Historic District Review Board Wednesday night, Dec. 5, a series of local residents advocated demolishing the decrepit old Butterfield Hospital, though others called for preserving the original 1925 core and said the issue is not an either-or question of either saving or destroying the entire structure.

The HDRB also heard a lawyer for the developer warn against prejudgments — a remark prompted by dissemination of a new HDRB report that can be read as an argument against demolition. 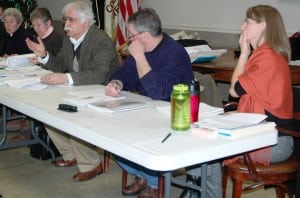 HDRB Chairman Al Zgolinski announced the board would issue its decision on demolition on Dec. 19, complying with a requirement that it act within 15 days of a public hearing.

His concept has won the approval of homeowners in the adjacent Paulding Avenue area, as well as the backing of various government officials, including Libby Pataki, Putnam County tourism director, and District 1 County Legislator-elect Barbara Scuccimarra, who both spoke in support of Guillaro on Wednesday night.

Another county representative, Denis Castelli, Putnam County historian, likewise endorsed demolition of the hospital, a conglomeration of the Georgian-colonial style 1925 original structure, a similar 1941 wing, and a modernistic 1963 expansion that subsumed the earlier parts.  Castelli said no one claimed the hospital was significant until demolition loomed. “Now that is being looked at as a historic building, and I think it’s grotesque.”

Cece Saunders, a historical preservation expert hired by Guillaro, said much the same thing. “The 1920s building was almost entirely engulfed by the 1963 structure,” she said. “The building itself has no integrity. It’s a hodge-podge.” 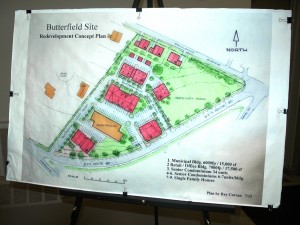 The redevelopment plan, which depends on demolition of the old Butterfield Hospital; photo by L.S. Armstrong

The Paulding Avenue Neighbors Association also recommended demolition. “Once the 1960s façade was added to the building, its historical significance and aesthetic appeal was lost. If the developer is prevented from demolition, we will have to live with this ugly building for the foreseeable future,” the group said in a statement that a member read aloud.

Moreover, the association observed, Guillaro “indicated he will file suit if his application is denied, costing the village legal expenses, and he may prevail, anyway.”

The group reiterated its support for Guillaro’s design for the complex, “arrived at through a time-consuming, consensus-building community process, one in which the developer accommodated the community’s most requested changes. We would like to see it built, but the current consensus plan depends on the hospital’s demolition. If the board denies the application to demolish, it also effectively denies the community what we said we wanted.”

In regard to the hospital, “there is nothing here to save,” Thomas Ambrose agreed, in a separate letter.  “As a whole, it is an architectural catastrophe.” He advised that if the HDRB insists on saving the entire hospital, it will undermine public support for historic preservation — a point also made by another speaker later, as well as by Steven Barshov, a lawyer for Guillaro.

If the HDRB won’t let the building be torn down, “you will be setting a precedent here by saying that these architectural features are the ones that are worthy of preservation and are in fact compatible with the historic district” in the village, Barshov told HDRB members. Hospital demolition “would have no adverse impact on any of the village’s 19th-century architecture. Taking away what is essentially a derelict eyesore will not adversely affect” neighboring properties, either, he argued.

Stacey Matson-Zuvic, a Cold Spring resident and regional officer of the New York State Office of Parks, Recreation, and Historic Preservation, lauded the HDRB for its diligence. “I do think they are approaching it in the right way,” considering the hospital’s role over decades, she said. “History doesn’t end in 1900 anymore,” or even the 1950s, Matson-Zuvic said. “We look at history in its continuum over time.” 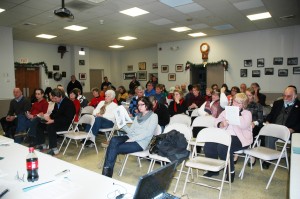 A Garrison resident, Rose Sanca, weighed in as well. “I feel this is a community issue. It’s not just about Paul Guillaro and Cold Spring,” she said. Sanca said Guillaro had “bent over backward to accommodate the public” and that if he abandons the project, another developer with fewer good qualities may construct something unacceptable. “That scares me,” she said.

James Hartford, a Cold Spring resident and architect, proposed a revival of Guillaro’s offer in September to preserve and rebuild the 1925 element of the hospital but not the rest. To say that the whole hospital must go or the community cannot have a new senior-center/municipal building “is not a fair statement,” he said. “That’s not what we’re after here.”

Carol Hopper noted that the Carolyn Lahey Pavilion, the existing clinic built alongside the hospital, bears her mother’s name. She urged Guillaro to memorialize in some way those who built and worked in the hospital in its nearly 70 years of existence. “I would love to see this part [1925] of the building rebuilt,” she added. “I hope it’s not going to be all or nothing. I don’t see why it has to be.”

Guillaro’s lawyer, Barshov, pointed out that the only question before the HDRB is one of “yes” or “no” of approving the request for demolition of the whole hospital. “It would be arbitrary for it not to be granted,” he said. Once the basic question of demolition is resolved, other ideas and proposals can be negotiated, he said.

John Cronin, a Paulding Avenue resident who referred to himself both as “an ardent preservationist” and proponent of demolishing the hospital, observed that Guillaro “cannot be ordered to restore the building.” But at the same time, “if he is given permission to demolish it, he doesn’t have to demolish it,” and the discussion of modifications and options can continue.

Barshov also advised the HDRB to remember its role — which he said is that of an administrative agency, not a policy-making one. “You don’t get to make your own rules” for issuing a certificate of appropriateness for a demolition. Instead, he maintained, the HDRB must follow the village code, which he said limits the HDRB to considering whether a building is important to preserving the 19th-century architectural character of Cold Spring. “The code is what governs.”

He questioned the HDRB’s 22-page Architectural Narrative: The Julia L. Butterfield Memorial Hospital, distributed to the public at the meeting, which proposes that the hospital’s eclectic, seemingly discordant elements constitute a noteworthy whole.

Although the hospital “may seem to be a disjointed collection of unrelated sections,” the document states, “several design narratives unite the overall structure, communicating the story of its evolution from the common architectural root … . ” While each section “is stylistically distinct and a product of its time, they all relate to each other, forming a common and progressive architectural narrative.” Also, the pieces demonstrate “the ways medical services changed” throughout the 20th century and “tangibly represent the civic and philanthropic efforts” of important personages, the report concludes.

Barshov described the report as “a strained effort to find some type of continuity” in the architecture of the hospital “in order to hang one’s hat on a rationale that is specious and does not speak to these criteria in the [village] code. I am concerned about this as a prejudgment” and “whether this board’s impartiality has been compromised,” he said. He said such a document is something the HDRB should be producing “at the end of the process, not injecting it into the [public hearing] record itself to salt the record to provide a basis for its own decision.”

“We don’t want to sue the Village of Cold Spring,” he added.