Playwright Richard Knipe: ‘I keep it to whatever is in their lives that I know about’

The new play Prisoners by Richard Knipe, which opens at the Depot Theatre on March 1, has many disparate elements contained within its two acts: death row, a nun and her mother, alcoholism, romance, a juror stricken with doubt, a dollop of humor, a widow of a murdered man. Amidst all of this, the one thing it does not contain is an opinion about capital punishment. “I kept my opinion out of my play,” said its author, Richard Knipe, a Depot Theatre veteran who has enjoyed success there with two full-length plays, Schooling Giacomo and Hope and Glory, as well as evenings of one-acts produced by the Aery Theater Company, of which he is a founding member. 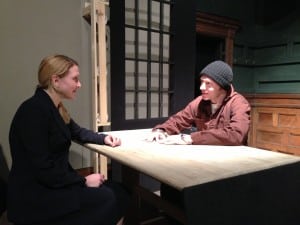 Ali Bernhardt and Brendan Ryan in Prisoners at the Depot Theatre

The plot of Prisoners is centered around a man who is on death row for killing a policeman. Around this character swirl four others: a young nun — the play’s real protagonist, according to Knipe — who visits him and whose own problems unfurl during the course of the play; her mother, who, though the antithesis of her in beliefs, cares deeply for her daughter but is unable to leave her house; the widow of the victim, who has a drinking problem and skeletons in her closet; and the foreman of the jury, who convicted the inmate six years prior to the play’s action and is now having second thoughts. The foreman visits the widow to help reinforce his decision; as he questions how he is qualified to make that determination, they wind up in an affair.

Fast-paced scenes alternate constantly between pairs of characters. Although he called the story “heartbreaking,” Knipe said there are needed moments of levity, in part to allow the audience to recover from the tension.

Like his other plays, Prisoners has, at its heart, said Knipe, important characters who are “older,” because “you can make older characters almost anything you want and transmit ideas through them.” Or maybe it’s a bit of “the fourth commandment” at work, as Knipe explained: “Traveling for work, I met this cool older guy, who told me, over an ale, that his favorite ‘book’ was the Ten Commandments, and that the fourth commandment was the most important. I had to think, ‘What is it?’ He told me it was ‘Honor thy father and thy mother’ and that this has nothing to do with actual parents but honoring those who have come before you and respecting what they’ve learned and working to make that better.” 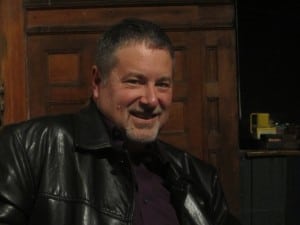 Richard Knipe, writer and director of Prisoners Photo by A. Rooney

Prisoners began its life right when Knipe started writing scripts, back around 1999, when he caught the playwriting bug after his wife convinced him to audition for a local (Rockland County) church production of The Mouse That Roared. Unexpectedly, though a novice — he had previously been a musician, playing drums and guitars in a number of bands — he got a lead role, and, the audience’s laughter activated that “Oh my God, I like this” adrenaline.

More stage roles followed, but the demands on his time proved too great to keep up that pace. (He has worked in sales, which he calls not all that different from acting, for a chemical company and currently for a fiberglass firm; he also has four children.) A local playwriting competition grabbed his attention; he sat down and wrote something and emerged a winner on his first attempt. Writing plays became his new addiction, “and it’s been fun ever since,” he said.

Knipe’s most well-known play, Schooling Giacomo, resulted from years of work and many rewrites. Its four-week Depot Theatre run in 2008 was instructive in showing Knipe “where the cleaning up was needed — that small theatre is an exciting venue because you can really feel the lulls and determine the pacing because it’s such a small house.”

Knipe raised the funding needed to mount an off-Broadway production of it, which ran at the American Theater of Actors in 2009 for two months, with much of the same Depot cast. It received positive notices from Backstage and CBS News, among others, but the financial realities of producing in the city were sobering. “I learned you can get all excited about reviews,” he said, “but city audiences don’t come right away, so by the time audiences started to come and our houses were packed, we were closing. It was frustrating.” 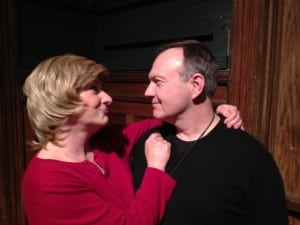 Rhonda Smith and Brendan Ryan in Prisoners at the Depot Theatre

Prisoners originally took the form of a two-character, 35-minute piece. “But I was more interested in comedies and dramadies and I put it aside,” recalled Knipe. Years later, he submitted it to a playwriting competition, where it took second place and received very encouraging comments, so Knipe started rewriting to make it clearer. After many drafts and reshaping, and with input from all of the actors, it is Knipe’s hope that “even though we know that this guy has been convicted for killing a cop, somehow we like him and are rooting for this love affair where they can’t even touch.” Trying to touch upon universal themes, Knipe said, “You’re supposed to write about what you know; I don’t know much about nuns or convicts, but I keep it to whatever is in their lives that I know about. I also want to leave my audiences with hope.”

Knipe prefers to cast his shows with people he has worked with before, or, at the very least, whom he has seen perform. That is the case with his five Prisoners actors: “Ali Bernhardt plays the nun, and she is always what I had in my head for this role. Brendan Ryan is the convict  — he has this street knowledge and he understands comedy.”

Rhonda Smith, who was in Hope and Grace, portrays the widow — “she comes up with brilliant ideas,” said Knipe. The other two roles are played by Depot veterans Hugh Scully, who was in Schooling Giacomo, and Nancy Swann, the Depot’s creative director, who appeared in Hope and Grace; Knipe praised both effusively. The set has been designed by Dana Kenn to reflect the notion of “making everything its own prison,” according to Knipe. The lighting was designed by Donald Kimmel, who, said Knipe, “has asked me questions about things I haven’t even thought about, to achieve the right mood.”

Prisoners will open on Friday, March 1, and will run through March 24, with performances on Fridays and Saturdays at 8 p.m. and Sundays at 2 p.m. Tickets are $20 for adults and $15 for seniors and students. Reservations can be made through brownpapertickets.com or by phoning the Depot at 845-424-3900.