After a discussion laced with blunt comments, Philipstown’s Town Board and the Old Road Society last week agreed on the merits of crafting more detailed specifications for upcoming bids on paving 450 feet of Old Albany Post Road, a ribbon of dirt literally grounded in history. 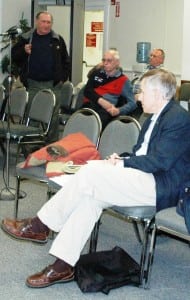 The Town Board devoted much of its formal monthly meeting Thursday night (March 7) to dialogue with Old Road Society members and others, including Philipstown Highway Superintendent Roger Chirico, on how to proceed after the abrupt departure of the contractor expected to undertake the project. A long-awaited effort to counteract damage from 2007 storms and prevent further destruction, the project involves the southernmost end of the road, between Upland Drive and Sprout Brook Road.

About two days before Thursday’s meeting, Bilotta Construction Corp., the contractor expected to do the work, withdrew its bid, following a phone conversation with Terry Zaleski, president of the Old Road Society. The society questioned whether Bilotta understood a 2011 memorandum of agreement between the Old Road Society, town government, New York state, the Advisory Council on Historic Preservation, and the Federal Emergency Manage­ment Agency (FEMA). The contractor’s withdrawal forces the town government to re-bid the project. In doing so, various local stakeholders concurred on Thursday, not only will the memorandum of agreement  (MOA) be issued as part of the overall bid package but crucial details from it will be incorporated into the actual job specifications much more directly than previously.

Zaleski, one of several Old Road Society members in the audience, argued that “it’s not enough to simply send a copy of the memorandum of agreement to the contractor. There are terms in the memoran­dum that specifically state” that some provisions “have to be included in the body of any contract. There were things missing” in the first bid distribution, he observed. “The memorandum of agree­ment is very clear when it comes to things that have to be done.”

Philipstown Supervisor Richard Shea acknowledged the problems. “The first round was lacking,” he said. “Yes, the MOA will be part of the future bid specifications. I understand the need for clarity. We understand the importance of picking out really critical details that are part of the MOA to be included in the contract document. So we’ll obviously go ahead, get the documents re-drafted, have the MOA attached, but have certain sections that are critical as part of the contract document itself. 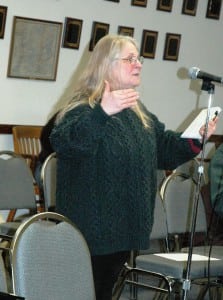 Glenn Lebwohl-Steiner addresses the Town Board during a discussion on the Old Albany Post Road paving project. Photo by L.S. Armstrong

“We certainly intend to honor the MOA,” Shea stressed. “It’s in our best interest in a lot of ways” to do so,” both in terms of sustaining public trust and because a failure to comply would endanger support from FEMA, which is paying for much of the project.

“If we don’t work to the MOA, we don’t get paid,” Chirico put in. He admitted that the first set of bid materials “maybe wasn’t clear enough. I don’t say everything we’ve done was 100 percent right. If we didn’t get it right the first time, we’ll work it out.” At the same time, he said, typically construction details get spelled out in the pre-construction meeting with a contractor after the bid is awarded, not earlier.

One thing the MOA mentions is use of a paved surface that mimics a dirt road.

“The MOA talks about ‘should we be paving, or looking at some other type of surface?’ — which I don’t believe was done,” said Post Road resident Andy Galler, who serves on the town government’s Conservation Board.

The memorandum states that the town, through its contractor, “will surface the existing gravel road­way with asphalt paving” in the 450-foot section. “If possible,” it directs, the road surface should achieve a rough-surface finish, such as that of a typical asphalt base course, with the desire being to create a surface more closely resembling the appearance of a gravel surface than a typical asphalt road surface, also allow­ing the flexibility to explore products that are applied quickly and provide long-lasting results.”

To Chirico, that means the rough-surface option is “to be considered. It says ‘maybe.’” As for the project itself, on “the lower end of Old Albany Post Road, I think the people that live down there have had a problem long enough. It’s got to happen,” Chirico said. “The percent of grade down there does not allow the road to be dirt.”

Glenn Lebwohl-Steiner, another dirt road defender, told the board and Chirico “I don’t think there’s any question about that end of the road being paved and fixed, about safety, the ability of equipment and emergency vehicles to get in and out of there and have the safety of the residents really assured.” What the Old Road Society worried about, she continued, was “that the MOA would not be part of the para­meters of the project.”

Zaleski assured Shea that “we have no doubt of your good faith. We want to have access to the state funds and the FEMA funds out there. We have no qualms about moving forward with this project. We just need the MOA to be implemented properly.”

Questions for the questioners

The Dirt Road Society came under scrutiny as well. 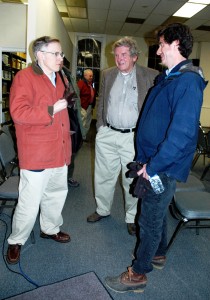 After the Town Board meeting, Terry Zaleski, left, confers with Sandy Saunders and Andy Galler. Photo by L.S. Armstrong

Old Albany Post Road resident Sandy Saunders chided his fellow dirt-road advocates for giving in. “I do not agree that we should roll over and play dead about this 450 feet,” he said. “Sometimes it’s been mushy and sometimes it’s been washed away, but it’s always been historic.” He recommended the town not rely on federal funds for repairing road. “FEMA money is not good money,” Saunders said. “Don’t do it. And we don’t need it. Roger is thoroughly competent to do it.” Saunders blamed the problems along the Post Road’s lowest stretch on inadequate culverts and drainage for driveways.

“I disagree,” Shea answered, recalling that after the 2007 storms he found “a 6-foot rift, down the center of that road.”

Another resident criticized the Old Road Society for its stance over the years. “I’m really shocked and surprised” at the Old Road Society’s comments about supporting the project, said Robert Dee, who lives along the oft-damaged 450-foot section and serves on the town’s Zoning Board of Appeals. “I never heard that you guys were really for it. All I’ve heard from the Old Road Society is obstructions, for five years. And I think we should move forward.” He also took issue with Zaleski for calling the contractor directly, instead of channeling questions through the town supervisor. “Calling up contractors and intimidating them to back out of the job is not trying to move forward,” Dee asserted.

Town Board Member Dave Merandy referred to Zaleski’s intervention as “troublesome. I just don’t think that’s proper. If we’re going to communicate and work together, there’s a chain of command.”

Carlos Salcedo, who does not live on Old Albany Post Road, also likewise objected to the Old Road Society’s approach to the contractor. “That’s not appropriate. That creates more confusion.” He also posed the question of “when enough is enough” and said he spoke “from the point of view of a taxpayer and of a citizen concerned about projects getting accomplished, about safety, and about the cost. Every time we delay this project it’s going to cost everybody a little bit more. I think everybody has operated in good faith. But there is a moment when we have to apply what’s been agreed. And there’s a moment when certain good will has to be extended to the board and has to be extended to the people that are going to do the job.” He urged all parties to cooperate and get the work done. “I don’t want to be here in another six months discussing the same thing, when enough is enough.”

Zaleski defended his organization: “I think the appropriate actions were taken by the Old Road Society, with due prudence.” He said the group contacted town officials the weekend before talking to the contractor. “Phone calls were never returned. We gave [you] the courtesy” of being informed in advance, he said.

“I did not receive a phone call,” Shea replied. “I received a phone call after you talked to the con­tractor.”

Zaleski subsequently provided Philipstown.info with a copy of an email to Town Board members on Sunday, March 3, sent to their official town government email addresses, expressing reservations about ratifying the contract with Bilotta before unresolved questions were settled. The Old Road Society sent a formal letter a day later.

As he has previously, Shea characterized the 450-foot paving project as separate from any other project on Old Albany Post Road or any other town road. “We’re dealing with two distinct issues,” he said. One is repairing the end of Old Albany Post Road. “The other is the open question of how we address the issues on the remaining dirt roads and, specifically, a couple of spots that are chronic problem spots. We’ve got Saunders Hill,” also on Old Albany Post Road, he said. “We’ve seen that washed out. We’d like to ad­dress that. But that’s an open question. There’s been no determination made. There haven’t been any secret meetings or anything. There is no large-scale plan to go paving any long sections of dirt roads in this town right now.” 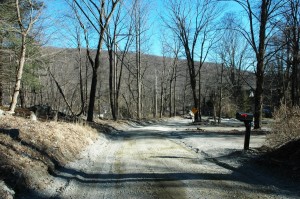 The section of Old Albany Post Road winding downhill from Upland Drive is scheduled to be paved. Photo by L.S. Armstrong

Chirico declared that “safe travel on them roads is my responsibility. And I intend to continue with my job, whether we pave or leave them dirt. I’m not going to fight with you people.” He ventured his own opinion: “I’d say they’re not cost effective, in certain areas, these roads to be dirt.”

Dee, while favoring the paving of the Post Road section by his house, said “I’m glad Mr. Shea separated this 450-foot area from the other areas in the town because I’m sure some of these people have a legitimate concern about some areas where they feel maybe they want to have dirt stay.”

Shea promised ongoing opportunities for the public to be heard. “I want people to feel that when a de­cision is finally made, there is going to be input. In the end you generally get a better project” that way, he said. “In the end, that’s what community is about, having that sense of community.”