Says he saw enough himself to warrant calling in law enforcement

Philipstown Town Supervisor Richard Shea has confirmed the existence of the investigation into the town’s Highway Department and that he is the one who initiated it. “There is an active investigation being conducted at my request,” he told Philipstown.info. “Accusations were made and I looked into it and it rose to the level where I believed it should be brought to the sheriff,” he said. Shea also said he filed a written statement with the sheriff regarding the matter.

No findings of any wrongdoing have been made. 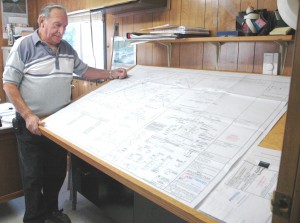 Roger Chirico reviews a map of a project in 2012. Photo by L.S. Armstrong

Shea told Philipstown.info that the Putnam County Sheriff’s Department has been conducting the investigation for the last few weeks and that it has focused on the activities of the department head, Highway Superintendent Roger Chirico, an elected Republican officeholder.

Shea declined to add any details on the content of his referral to the sheriff or about how he first heard about the matter or what he discovered when he looked into it.

Capt. William McNamara, spokesman for the Sheriff’s Department, in an email response last week wrote, “I can neither confirm or deny the pendency of any investigation by the Sheriff’s Office.”

Among the matters the Sheriff’s Department is said to be examining is the alleged use by Chirico of highway department personnel and facilities for work on vehicles for use in purposes other than the repair and maintenance of town roads. Complaints by both former and present employees over a long period of time are said to have caused the investigation, according to the sources. As the independently elected head of the department, Chirico has broad authority on hiring and other personnel decisions.

Motor vehicles, truck chassis and other equipment not used for town functions are said to have been stored and worked on during business hours at the town garage on Fishkill Road in Nelsonville.

Questions have also been raised about the possible conduct of outside business unrelated to the town but possibly using equipment stored at the garage as well as personnel.

Chirico is best known of late for the controversy over his advocacy of paving town dirt roads to avoid what he argues is the expense of repairing and maintaining them. Many residents who live those roads dispute his arguments and have urged the preservation of the roads for historical and safety reasons.

One thought on “Shea Acknowledges He Asked Sheriff for Chirico Investigation”