Leonora Burton, Welsh-born proprietress of Cold Spring’s The Country Goose, has written her memoirs, titled Lament of an Expat: How I Discovered America and Tried to Mend It. The book has been self-published through AuthorHouse and is currently available for purchase at select stores in Cold Spring as well as online.

In the news release for the book, Lament is described as “the witty, sometimes bemused chronicle of an expat’s plunge into American culture, with its love of the gun and the sacred dollar, with its rigid Constitution and with the kindness, generosity and humanity of ordinary Americans.” 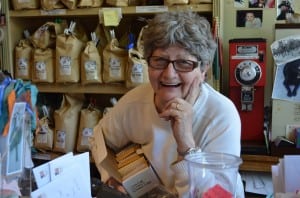 Leonora Burton at her shop

Visitors to The Country Goose and readers of its weekly column, Sitting on the Bench — “written” by Burton’s black Labrador retriever, Lady Tara (with the help of Burton’s husband Tony, formerly a journalist with New York Daily News and an author himself) — will be familiar with the British-style humor that characterizes Burton’s Lament. In it, she pokes fun at many things and many people — including the U.S. and the quaint village she calls home — but often only gently and lovingly, and she doesn’t spare herself, either.

An example of this self-deprecating humor is the cover photo of the book, which shows Burton, one of several young women identically clad in cute dresses and sashes reading “Nixon’s the one,” called out by a speech bubble saying, “So — who is Richard Nixon?” Visit the shop and she’ll tell you the story, which is also explained in the book of how, recently arrived in the States, she was asked to be a “volunteer” and cheer on the presidential candidate, all for a reward of $25.

Asked what motivated Burton to write the book, she joked, “I didn’t have anything better to do; it just seemed like a good idea at the time.” But then she explained how her husband had encouraged her. “My husband kept saying, ‘Come on, let’s get together. Let’s get you talking about your life, because it’s been interesting.’ And I said, ‘I cannot think that my life is any more interesting than anyone else’s,’ and he said, ‘No, no, no, it is, it is!’” Later she added, “I really enjoy writing, and I wanted to try something that was a real romance and not a Regency romance!” (She has written several Regency romance novels under her pen name, Leonora Blythe.) 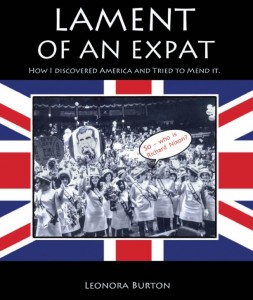 The lives of expatriates often have the potential to be interesting, especially when describing the clash of two distinct cultures and the perspective of an outsider looking into the culture of the adopted country. It helps, however, that Burton has an adventurous nature and some juicy tidbits to impart. As the official teaser states, “It describes the author’s plane crash, encounters with the Mafia and The Happy Hooker, a cardboard funeral casket, a call girl from her hometown in Wales and a Caribbean wedding that was supposed to exclude God but didn’t.”

And on top of all that, Burton also gives her account of recent goings-on in Cold Spring by describing “in depth how the idyllic serenity of the village where she now lives was roiled, often comically, by the intrusion of aggressive politics.”

Asked about the subtitle’s claim of Burton’s attempt to “mend” America, she hesitated before elaborating. Burton pointed out a few things she’d like to see change — Americans’ aforementioned love of guns and money (and their readiness to sue for damages in any situation); the power that corporations wield in politics by bribing politicians; and the stubborn upholding of an old constitution as a sacred document (which she points out even Thomas Jefferson said should change as the nation changed).

She admits some of these “irritants” may very well be issues in the U.K. these days — such as the power of corporations — and that her home country has its own problems, but she also believes that the British parliamentary system has its advantages. If in the U.K., for example, the public believed the government was not functioning well, people could give Parliament a vote of no confidence and completely replace it within a matter of six weeks. 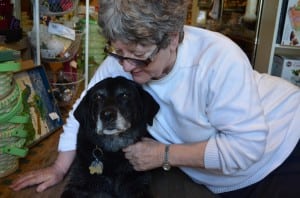 Burton is quick to point out, however, the multitude of things she appreciates about living in the U.S. and particularly in Philipstown. There are several instances of the “warmth and kindness of regular Americans” — her neighbors Nestor Bryant in Woodstock and Butch Harris in Cold Spring, who were always ready to help out, often without even being asked.

She also commended the U.S.’s protection of free speech, a class system that is not as prohibitive as the U.K.’s, having the opportunity to get ahead in work (which she says may be diminishing now), and the willingness of everyone who employed her to give her a chance. She did, after all, end up staying in America, after only originally planning to be here about two years.

While Burton does feel a bit of sadness about being displaced from her beloved Wales, her book is not so much a lament as it is a comical account of the characters she’s met, the interactions that have puzzled her as an expatriate, and the adventures she’s had (which she would not have had if she’d stayed in Wales).

Paperback copies of Lament of an Expat are available for purchase at The Country Goose, 115 Main St., as well as The Country Touch, 97 Main St., and C&E Paint Supply, Inc., 158 Main St., in Cold Spring. Copies in print or as e-books can be ordered online at authorhouse.com, barnesandnoble.com and amazon.com.