It appears that parking is once again back on the agenda in Cold Spring. At the suggestion of Trustee Charles Hustis, the Village Board workshop, July 16, was largely devoted to the subject and there will be more public discussion in the not-too-distant future. 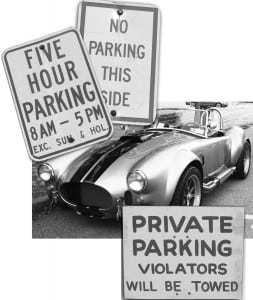 Referring to a detailed map of the village, Hustis described a tour of Main Street that he recently took on foot to personally assess traffic and parking. One of his main observations was the hazard created by poor sight lines that drivers must contend with when coming off of side streets at several Main Street intersections. He and members of the small audience identified vehicles parked on Main Street, very close to the intersection, as the problem.

As cars are often parked on Main Street, very close to the side street, some drivers inch their way into the intersection in order to see oncoming traffic, a practice that Trustee Matt Francisco dubbed as “faith-based driving.” The comment got a laugh, but everyone seemed to recognize that sight lines are a safety concern.

Hustis also identified the rather unconventional, three-way intersection of Marion Avenue, Wall Street and Furnace Street as problematic. “I almost got hit by a car there,” he said. He also said he has received complaints about the dearth of municipal parking lots and suggested that another is needed, and that the Marathon site may be desirable.

Referring to the 2008 parking study, Hustis suggested that a public hearing be held to discuss parking and that the board consider implementing the study’s recommendations. “I want to put this to bed once and for all,” Hustis said.

During the discussion, Mike Armstrong, who chairs the Special Board for the Comprehensive Plan and the Local Waterfront Revitalization Plan, often referred to the parking study he helped lead five years ago. He said that one of its conclusions was that there is an adequate supply of parking spaces in the village “most times” but that on some occasions parking is inadequate.

Not surprisingly, parking meters, specifically whether or not the village should have them – dominated much of the session. When one member of the audience recalled that at a past public meeting, 45 of 50 residents in attendance were against parking meters, another audience member responded, that “Most people only come out when they are against something.”

At the heart of the pro-meter argument is the potential to generate revenue. Armstrong said that the study showed that the net annual revenue to the village from parking meters would be about $180,000, and that the cost of purchasing and installing the meters could be paid off in four months. “I don’t think you can challenge the numbers,” Armstrong said. He also said that meters are an aid to enforcement because unlike chalking tires, meters provide a printed record.

Barney Malloy, chairman of the Cold Spring Planning Board, said, “We’re paying for a significant visitor population … users that are not supporting village infrastructure.” Parking meters, he said, “could help defray the cost of services provided.”

The municipal parking lot next to Riverview Restaurant.
Photo by M. Turton

When Armstrong repeated that parking meters can generate “significant revenue” and that the village needs funds for capital projects, Falloon responded, “I know.”

The meters that would be used cover about 10 parking spaces each, unlike the old “lollipop” meters which were located at each parking space. The meter produces a ticket which motorists display on their dashboard. Armstrong said that the printed, verifiable record also aids enforcement. They can also be programmed, enabling scenarios such as one Armstrong mentioned in which weekday parking rates could be made less expensive than weekend fees.

Falloon said it would be “disrespectful” to not consider the parking study after the effort that had gone into producing it. “I think the fair thing to do is to list all new questions, combined with using the (study) data. “He pointed out that three current trustees were not part of the last formal discussion of parking-related issues. He said a public meeting will be held to move the discussion forward.

Trustee Stephanie Hawkins said that the net revenue that could be generated by meters was “compelling” but that consideration would have to be given to possible negative effects on village residents. The possibility of waiving parking fees for residents was brought up but Armstrong said there was no precedent for that in New York state. “It would be a very difficult thing to do. You’d be opening a can of worms,” he said.

Hustis will head up the latest examination of parking related issues. No date was set for a public meeting.

In addition to being a Cold Spring police officer, Bill Bujarski serves as village building inspector, a part-time position. He appeared before the Village Board to plead for assistance in the one-man building department which he runs. In addition to carrying out his duties as building inspector, Bujarski said code enforcement work has increased. The biggest issue? “Paper work is killing me,” he said. When Hustis asked if a second person in the office would help, Bujarski said, “Yes, if they’re knowledgeable. If not, I have to check (their work) constantly.”

The mayor was sympathetic but did not have much good news. “We’d be glad to get you help. The problem is there is no money,” Falloon said. There may be help for Building Inspector Bujarski outside the Cold Spring budget. Village Clerk Mary Saari will pursue a grant to update and streamline record management for the building department.

Falloon said he will approach the Town of Philipstown and the Village of Nelsonville to discuss a possible merger of the three building departments. He said such a move wouldn’t just benefit Cold Spring. As an example, he said that Philipstown would gain access to two additional part-time building inspectors from the villages.

Selecting a firm, courting a bank

Selection of a new planning and engineering firm to serve the village was discussed briefly. Falloon said that the board needs to create a list of potential firms, select three or four to interview, and “get moving” on the selection.

Representatives of Rhinebeck Bank will meet with the Village Board July 25 to discuss the processes with any potential changes to 159 Main St. The building is home to Powers & Haar Inc. Insurance and was acquired by Rhinebeck Bank in 2012. Members of Cold Spring’s other boards will also be invited to the meeting. There is a possibility that the Poughkeepsie-based bank may look at establishing a branch in Cold Spring. The bank’s architect was scheduled to tour the building with Bujarski July 17.

One thought on “Debate Returns Over Village Parking”