Putnam County last week dropped the idea of advertising-bearing mile signs on its hike-bike path after the company involved pulled out and county legislators turned to ways to enhance safety on the trail without commercial plugs.

At a Monday night (July 22) meeting of the Putnam County Legislature’s Physical Services Committee, Legislature Chairman Richard Othmer announced that Bikepath Country Inc., the firm in line to get the contract for placing and maintaining the signs, had withdrawn from the project that afternoon. In a letter he read, company officials said they would focus on communities with agreements in place.  “They’ve backed out of the deal. So it’s done,” announced Othmer, a Physical Services Committee member.

“You got your wish,” County Executive MaryEllen Odell, told critics of the ad-bearing signs. 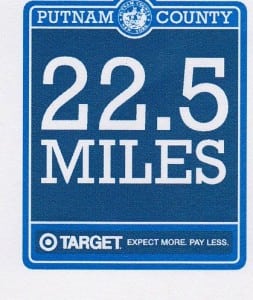 One version of the proposed bike path signs contained mile information and a small ad at the bottom.

Having a private firm install the signs, which would have mixed small ads from companies such as Target and Gatorade with mile-post information, was viewed as a way of sparing the county financial outlays associated with the path and boosting revenue. Signs – with or without advertising – are considered a safety-enhancement measure, helping emergency responders quickly pinpoint the location of accidents.

What had seemed a pro-forma vote of approval when the Bikepath Country contract came before the full Legislature July 2 turned into a controversy, as opponents of the advertising turned out to protest. After considerable public comment at that session, the Legislature postponed action.

Although the path runs along the eastern side of the county, Philipstown residents joined in the outcry against the ad-bearing signage. “Not only will it be an aesthetic blight, but the crony capitalism and quid-pro-quo of election fundraising are being spotlighted for all to see,” Stanton Lovenworth wrote July 7 to District 1 Legislator Barbara Scuccimarra, who represents Philipstown.

“Not only am I appalled at the prospect of advertising signage on a bike-hike trail, I am worried about the lack of transparency shown by the Legislature and particularly the county executive in considering undertaking such a project without an appropriate period of public comment,” another resident, Julia Famularo, likewise said July 7 in a note to legislators.

The issue then resurfaced at the committee meeting, which drew not only the three committee members but five of their colleagues. The Legislature has nine members total.

After the concept was abandoned, Othmer, of District 3, apologized for the way it had been handled. “I’m going to take responsibility for this fiasco,” he said. In allowing the issue to come before the Legislature, “I saw this as a way to save money. I really didn’t do my homework on this. And I put us all in this position.” He praised those involved, on whatever side of the question – the county executive and officials, fellow legislators, and public. “Everyone did a great job” on a difficult subject, he said.

District 2 Legislator Sam Oliverio reminded everyone of another possibility, suggested by a resident, with the mile information appearing on the surface of the path itself.  “Put pavers in the ground with the mile markers,” Oliverio suggested.

The expense of bike path upkeep likewise also came up.

“Down the road, we need to take [that] into consideration,” Scuccimarra urged, suggesting it had not received much attention when the bike path was created.

Early in the evening, Committee Chairman Carl Albano, of District 5, pegged bike path costs at $150,000 to $200,000 annually, although other legislators challenged that figure. “We’re looking at a big number, no matter how we break it up,” Albano replied. “I still like the idea of a public-private partnership,” he added later, as the discussion ended. “I don’t know if we’re ever going to find a perfect solution, but we’re going to look for the best solution.”