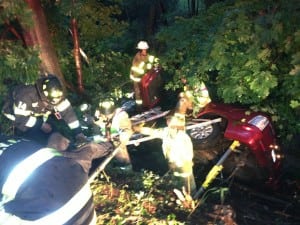 Firefighters work on an SUV that tumbled from Route 403 and landed in a tree, trapping four passengers, who were rescued. Photo courtesy of the Garrison Volunteer Fire Company

Thanks to efforts of Garrison firefighters and other rescuers who sped to the scene, a harrowing early-morning accident ended well last week for occupants of an SUV that ran off a road and came to rest above a brook.

According to details supplied by the Garrison Volunteer Fire Company, about 5 a.m. on Tuesday  (July 23), a rainy day, the SUV, traveling west on Route 403 in Garrison, veered out of control, jumped a guardrail and landed on its side over a stream. A tree caught the vehicle and prevented it from falling farther, but the occupants remained trapped inside.

Alerted by a call, GVFC members responded, as did both the Garrison and Philipstown Volunteer Ambulance Corps services. Continental Village firefighters arrived as well and provided on-site support. The road was closed and rescuers stabilized the vehicle before extricating the unidentified passengers, who included Philipstown residents. Route 403 re-opened about 7:15 a.m.

“Once again, this shows the important role our volunteer services play in Philipstown, the dedication of the men and women who get up at any hour of the day or night to help fellow citizens in trouble, and the value of mutual aid and cooperation among the various town fire departments, the [Putnam] County sheriff and state police,” GVFC Chief Bill Rimm said after the incident.

One thought on “Garrison Firefighters Rescue Occupants of SUV”