Local witches hope to be understood, not stereotyped

It may not come as a surprise to many in the Hudson Highlands that “earth-based spirituality” is practiced in the area; nature-worshippers would find plenty of nature to worship, from rivers and mountains to forests and ponds.

In Philipstown, residents may know of larger celebrations like the Maypole Dance in the spring, but they may not know that pagans, as they often refer to themselves, may meet regularly as small communities for spiritual growth and personal development, much like more well-known faith communities do.

Pagans form a wide-ranging group that seeks to revive pre-Christian, earth-based religious traditions, from the more structured denominations of Wicca (or “Witchcraft”) and the worship of ancient gods and goddesses to Druids, shamans, and self-initiated witches. Pagan groups generally observe the Wheel of the Year, a cycle of holidays based on the solstices and equinoxes, and they can all be said to worship nature.

Although most pagan traditions insist on respect for all living things and especially for the environment, many are still negatively stereotyped and wrongly imagined by some to be Satanists. Because of this stigma, they tend to keep a low profile, often practicing privately and preferring anonymity.

Of Wicca and witches

Nicole Graf, who currently lives in Peekskill and works in Cold Spring, identifies as a pagan. Raised by her atheist parents to always challenge beliefs but also encouraged to explore spirituality, Graf described her path to paganism as beginning at the age of 12, when she discovered the New Age section of a bookstore and bought Celtic Magic by D.J. Conway. From there she went on to learn about Wicca, into which she initiated herself when she was 16.

“Up until I was 23, I identified as Wiccan, and I specifically practiced under the religion of Wicca,” Graf said. “And around that time I kind of broke from that.” She called the following period her “exploration years as a spiritual person,” during which she sought out different groups, because she didn’t feel particularly Wiccan and “because at that point I didn’t like the concept of religion or regular practice.” 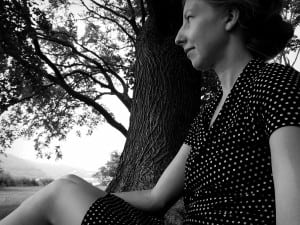 One of the reasons Graf wanted to break from more structured forms of Wicca was her desire for more openness, because traditional Wiccans keep many things secret except to those who are initiated. “Obviously I’m not asking to be anonymous,” she noted. “I don’t like to hide things; I like to share information. I sort of have an outlook that people are willing to communicate and debate things and agree to disagree, especially when superstitious beliefs come out like, ‘Oh you’re sacrificing things, and you’re really about Satan worship.’ I don’t know how to explain that I’m not, if I’m in a group that says, ‘Shh, you can’t talk about it.’”

That was when she found her current pagan group, which had only started in New Paltz a few months prior to her joining. “I think what I liked about it was that it wasn’t specifically Wiccan, wasn’t specifically shaman, but it derived from those practices.” After having been with the group for seven or eight years, she described it as “really a group of country folk who have a lot of heart and soul, and we have a lot of song and dance, but it’s not specifically Wiccan.”

She said members were teachers, psychologists, artists like herself, and even scientists. According to Graf, the scientists get teased on occasion, but in the end she thinks they come “for the same thing that anybody goes to spirituality for — you want to have a more personal connection with something that you just can’t otherwise explain.”

Though not at liberty to share the name of the group, Graf said that after coming up with the name, she and another woman agreed that they were a group of witches: “We’re a coven; it’s just a matter of time before we agree that we’re a coven.” This includes the majority male members, who are also called “witches” and not “warlocks,” as many might think.

Graf liked that members of the group had varying beliefs; sometimes deities were involved, but they didn’t have to be. While most Wiccans believe in a goddess and god (the divine feminine and the divine masculine), whether separate deities or two aspects of one deity, Graf felt more comfortable in her new group “not dedicated to a worship of deity.”

A Philipstown resident who has also been a member of Graf’s group belongs to the Reclaiming Tradition, which seeks to reclaim the name of “witch” from its negative history and espouses living in harmony with the earth politically as well as personally and spiritually, in such movements as eco-feminism and permaculture.

The Reclaiming Tradition might not adhere to all the forms of traditional Wicca, but it does observe the Wiccan Rede, or law — “Do what you will, but harm none” — as well as the general idea that every action has repercussions. The Wiccan Law of Threefold Return states that everything a person does will come back to that person threefold, encouraging benevolent action. “The more love you send out, the more love you get,” she said.

This witch, who wished to remain anonymous, said Reclaiming witches believe in the immanence of the divine in all things, that everything is sacred and interconnected.

As an example of the flexibility of the Reclaiming Tradition, this witch referenced described the spring festival of Beltane, which occurs halfway between the spring equinox and summer solstice and is often associated with the maypole and fertility.

She noted that while Beltane is widely observed by the pagan community, she created her own ritual for the celebration, in which each participant is given a lump of clay to which is transferred love for the earth in return for the love received later at the harvest. People can decorate the clay or shape it any way they wish, but then they leave it on the ground so that the rain can wash the love back into the earth, encouraging growth.

As for practicing magic and casting spells, she compared spells with prayers or positive affirmations — asking divinity or the universe to help with an endeavor, but as with prayer and affirmation, not expecting it to just happen without doing the work to achieve it. According to the Reclaiming Tradition, magic is using the power of the will to direct energy toward healing or change. It could take any form, from singing and dancing to changing a personal belief, from cooking to creating clay models.

Graf also spoke about magic as taking many forms, especially in her field of visual art. In graphic design, artists talk about the power of the image, particularly in advertising. For example, Graf said that seeing bright red along with bright yellow “you might think immediately, ‘McDonald’s,’” or the way images of women might cause some women to think they need makeup to be beautiful and happy — both use images to manipulate people. “So when people tell me, ‘You shouldn’t practice magic,’ I think, ‘Well maybe I shouldn’t practice art,’ because in a sense it’s an abstract influence on reality.”

Another form of magic Graf mentioned had to do with her own struggle with panic disorder. What she noticed in both that struggle and her spiritual quest is that “what you believe can really make who you are.”

She explained that fear could trigger a panic attack — both mental and physical overreactions. “So here was a thought manifested through my body. And in paganism, we talk about ‘as above, so below,’ meaning what you believe and what you’re seeking out there can be manifested, can be created, real. … OK, if I can freak myself out to that point, I can also calm myself down and make myself feel better.”

Graf said that the group used to meet every Friday, doing ritual and sharing personal stories to help each other, but because of time and financial constraints (gas money is needed to traverse the larger area where its members live), the group now meets every other Friday, on holidays and at occasional weekend retreats. They often meet in someone’s backyard or, if the weather’s not good, the house, but sometimes they get permission to use other properties.

For those interested in learning more about paganism, many resources exist online as well as in book form (in New Age sections in bookstores where Graf started her journey, or in the New Age stores that have popped up since the growth of paganism in the ’90s, such as the Awareness Shop, 180 Main St., New Paltz). At the Witch’s Voice website, witchvox.com, visitors can search their regions for local events. Upcoming events in New York, for example, include celebrations of Lughnasad, the first harvest, around Aug. 1, in New York City as well as in New Paltz.

To learn more about the Reclaiming Tradition of witchcraft, visit the website reclaiming.org, or that of one of its founders, Starhawk, at starhawk.org.

2 thoughts on “Pagan Presence May Not Be Loud, But Earth-Worship Experiences a Revival”