In an appearance that generated interest and support, Vinny Tamagna, Putnam County transportation manager, updated a legislative committee last week on plans for redoing the Cold Spring trolley routes to accommodate hikers and others. 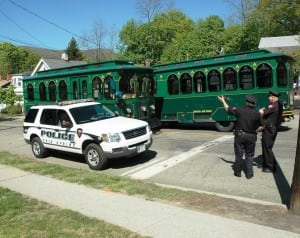 The trolleys could get a new, expanded mission under county transportation plans. (file photo)

County legislators similarly reacted enthusiastically to the news of plans to revive the Mount Beacon incline railroad, a mini-train or tram that once chugged up the mountainside, and the potential benefits  for Putnam County – not just southern Dutchess and Beacon.

Tamagna addressed the Putnam County Legislature’s Physical Services Committee Aug. 19 in Carmel. He wants to revamp the trolley circuit to bring hikers to trailheads between Cold Spring and Beacon while also catering to visitors to Boscobel and locations near the village.

Among other new developments, he mentioned the likelihood of berthing the county-controlled trolleys in the Village of Cold Spring highway garage permanently, except for periodic maintenance checks, instead of storing them in Carmel and bringing them back and forth or keeping them in Cold Spring overnight merely on Fridays, Saturdays, and Sundays. The trolleys – one in use, one as a back-up – run on weekends from May into December.

Tamagna provided a graph showing a decline in trolley ridership since 2010 but said that ridership is pushing upward this year from 2012. According to his chart, ridership peaked at about 775 persons in August and October 2010. For 2013 thus far, the chart shows a high of about 375 riders in June and about 350 for July. 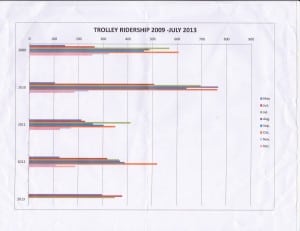 Trolley ridership peaked in 2010, according to a graph from Vincent Tamagna, Putnam County transportation manager.

He attributed the 2009 and 2010 trolley patronage to Henry Hudson quadricentennial celebrations. “We had a lot of people coming to Cold Spring” then, he said. Now, “we need to work more with tourism to get people on the trolley.” To upgrade the route and boost ridership, he proposes a new course that would go as far as Mount Beacon, about 5 miles north of Cold Spring on Route 9D, in Dutchess County, but reduce or abolish trips into the heart of Garrison southward.

As currently configured, “the Garrison route makes the trolley route too long,” Tamagna explained. Nonetheless, he told District 1 Legislator Barbara Scuccimarra, who represents Philipstown and part of Putnam Valley, “I don’t want to disenfranchise the southern part of your district.”

He suggested transportation to Garrison for special events, such as the Desmond-Fish book sale, when “we have an unbelievable number of people that have to get to the library.”  Instead of a long, expansive trolley loop, “we can do a shuttle” on such occasions, “ramp it up” a few times yearly, he said.

Tamagna also announced that efforts continue on revival of the incline railroad, popular in the first half of the 20th century, and said he expects to see it functioning again in about two years. Organizers “are absolutely serious about that. That’s going to happen,” Tamagna predicted. “That’s going to be as big as the Walkway over the Hudson,” the elevated path above the Hudson River on an old railroad bridge in Poughkeepsie. 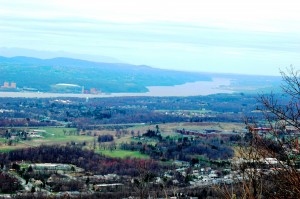 Currently accessible via a steep path, the top of Mount Beacon offers a wide view of the Hudson Valley. Photo by L.S. Armstrong

The Mount Beacon Incline Railway Restoration Society is leading the revival. At present, a steep hiking path leads from Route 9D to the summit of Mount Beacon, where a panoramic view of the Hudson Highlands awaits.

Legislators attending the meeting, including committee members, greeted the incline train news with positive comments and foresaw opportunities it would offer the entire area.

Visitors arriving by Metro-North will wish “to do all these things,” along with hiking, “and we’re going to want to get those people down into Cold Spring to our Main Street, our restaurants,” Tamagna said. However, he cautioned that “in order for me to go to Mount Beacon” with a revised trolley route, “I need a little more time to work with the legal department get the authority to operate outside my jurisdiction,” in taking the trolley beyond Putnam County.

He said officials in Dutchess County “are all very supportive. They want to do it. Dutchess is going to help us with it. But it’s a process,” one that likewise involves the New York State Department of Transportation as the representative of the federal government, which was instrumental in getting the trolleys in 2006.

Legislator Dini LoBue asked Tamagna for the costs associated with trolley operation and for more ridership details, which he promised to supply. “It’s not a lot of money at all to run the trolley,” he said.

Subsequently, he informed Philipstown.info he hopes to get the revised trolley route in place in time for the autumn and its spectacular leaf color.

Scuccimarra proposed that docents knowledgeable about Philipstown ride the trolley.

Tamagna assented, outlining an “all-volunteer” program. “We need to work with everybody to organize it,” he said, urging someone to follow up and assume responsibility for it.

“I can do that,” Scuccimarra agreed.

One thought on “Tamagna Update on Trolley Re-Routing Plans”