One of the most unconventional forms of Sunday worship offered in Philipstown is the Quaker meeting held in a private home at 10 a.m. every second and fourth Sunday of the month. Not only does the group happily go without a dedicated building, or meetinghouse, but it also enjoys clergy-less silent worship — usually an hour of complete silence — followed by a brief session of afterthoughts and brought to a close with coffee outside the meeting room.

The simplicity of the form of worship and of the group’s non-hierarchical organization reflect one of the guiding principles, or testimonies, of the Religious Society of Friends (as the Quakers are officially named), along with peace, equality, integrity, community and stewardship. The silence they observe together points also to their belief that it is not enough to speak about these principles, but they must be manifest through action.

Anti-establishment from the start

The Religious Society of Friends began in England in the 1640s, when George Fox led a movement to restore what he and his followers believed to be the early Christian church before it became institutionalized. Most importantly, Fox believed that Jesus Christ had come to teach his people himself and, therefore, there was no need for clergy or priesthood to mediate the experience of God. Fox’s teachings spread in England and Wales, and when they came under attack, some moved to the American colonies that tolerated the religion: Rhode Island and Pennsylvania, which was established in 1682 by the Quaker William Penn.

Because Quakers believe every person is able to immediately experience the divine — to hear God, the Spirit, the Seed, the Light Within, the Inward Teacher or the Sound of the Universe — Quakers stress peace, community and respect for “that of God” present in all people. They have been known for their anti-war activism, especially as conscientious objectors during wartime drafts, as well as for their stances against slavery, capital punishment and the swearing of oaths (because they are to always deal honestly with others) and their work in social justice.

While some branches of Quakerism (such as the Evangelical Friends) do employ pastors to lead worship, which can be “programmed” with Bible readings and hymns and emphasize scripture, the Philipstown group uses “waiting” or “unprogrammed” worship to listen to “the still small voice of God” speaking from within and emphasizes the authority of that “inward light.” During these unprogrammed meetings, participants sometimes feel moved to share a thought, in what Quakers call “vocal ministry.” 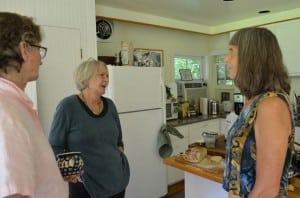 In some meetings, it may be a regular occurrence that people feel so moved by God to speak, but in the Philipstown group, usually a small gathering of anywhere from three to 15 people, silence tends to be the norm, especially since they can wait until the afterthoughts session to talk about anything they feel is important to mention. There have been, however, instances in which people have felt compelled to speak, which they say have been interesting experiences.

The Friends were initially ridiculed as “Quakers,” but they have since appropriated the name. After one September service held by the Philipstown group, some participants noted the aptness of the name when discussing how they felt moved to speak during the silence.

Not being taught explicitly in Quakerism how to know when to engage in spoken ministry — to discern between ego and the Spirit, they generally rely on a general rule of waiting and reflecting to know whether to speak; if after lengthy consideration they feel they cannot wait until the hour is up, then they “blurt it out.” Several members described the physical experience leading up to spoken ministry as, literally, quaking.

“Your body knows,” said James O’Barr, who added that he had felt his heart beating hard before feeling the need to speak. Robin Whyatt, co-host of many of the meetings with her husband, Tom, said it feels as if “the Spirit is speaking through you,” saying something that may be important for someone in the group to hear or that hits a chord running deep in the meeting as a whole.

The participants therefore described the silent meetings as a communal effort to listen to God. Linda Downey called it an “expectant waiting on God to receive something.” Others distinguished Quaker silent meetings from Buddhist meditation by stressing community and togetherness; Alan Vardy called it a “corporate silence” with collective intention. Susan Coleman rejected the labels of “Buddhist” or “Quaker” and stated that she just liked sitting in a circle without any hierarchy. 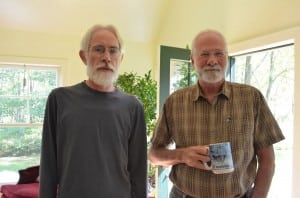 Alan Vardy and Tom Whyatt gather with the Friends’ worship group in Philipstown.

Like the Liberal Friends, the Philipstown worship group embraces a diversity of understandings of God, so some of the participants are familiar with other traditions, such as Buddhist meditation. During afterthoughts, some members mentioned the Zen Buddhist vows: “The many beings are numberless; I vow to save them. Delusions and desires are inexhaustible; I vow to overcome them.”

This was part of a discussion about the difficulties of trying to save all beings, like wasps or rats, and of working faithfully in gardens without having expectations but letting nature do its work. Beth Vardy mentioned her work as a counselor at a Quaker farm camp in Vermont, where they raised meat hens and then killed them for a feast — how to balance a love for all beings while also being a part of nature, in which animals die and eat each other.

The discussion demonstrated how “silence refreshes the spirit and makes way for deep thinking about both ethical and intellectual quandaries,” as explained in the Quaker Testimonies printed by the American Friends Service Committee.

A wide circle of friends

Because the Friends only require the belief in the possibility of direct communion with the Divine and a commitment to live outwardly according to that experience, there is a large diversity of beliefs within Quakerism. Conservative Friends, for example, generally hold unprogrammed worship, but they also retain the plain dress and speech for which Quakers were previously known (using “thou” and “thee” in place of the more formal “you”); Pastoral and Evangelical Friends might hold programmed services more similar to ones in some Protestant denominations and actually call their meetinghouses “churches” and some Liberal Friends may not even believe in any special divinity of Jesus Christ.

The Philipstown Friends, not having a dedicated meetinghouse, are considered a worship group rather than a formal “monthly meeting,” such as the Friends group in Purchase, with which they are affiliated and which holds weekly worship but must also meet once a month to take care of business matters.

Monthly meetings like the one in Purchase may be part of yearly meetings, which are grouped geographically and/or theologically, such as the New York Yearly Meeting. Yearly meetings may also be affiliated with one or more of the larger organizations of Quakers, such as the Friends General Conference or the Friends United Meeting.

To attend the twice-monthly worship group, call 845-424-3525 for directions to the private home.

One thought on “Quakers Draw Strength From Silence”