During the Revolutionary War, British and American troops traded threats and successive possession of the island, a wooded, peninsula-like prong in the Hudson River just below Cold Spring.

More recently, the volunteer Constitution Island Association and the U.S. Military Academy at West Point, long-time allies, fell out over policy regarding the island. Late in November, though, they took steps toward resumed amity.

The Association suspended pursuit of its controversial plan for an office and visitor center on Cold Spring’s Main Street. West Point renewed the Association’s validation as a group permitted to function on West Point property, after delaying re-certification for months. It also promised redoubled efforts to preserve the island’s Warner House, a historic home dear to the Association, which owns the contents; Army purview includes the structure itself. And the two sides conferred on Dec. 5, with plans for a lasting pact. 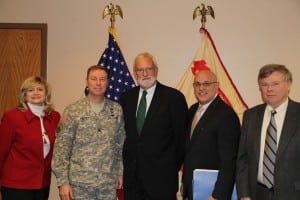 “The meeting was cordial and productive,” according to Frederick Osborn III, new chairperson of the Association executive board. “The [Association] officers expressed their appreciation for the prompt revalidation” of the organization, Osborn commented in an email exchange with Philipstown.info-The Paper Tuesday evening (Dec. 17). “The garrison commander pledged his support to undertake a project to repair and renovate the Warner House,” tapping Army-related resources.

The Association’s mission is “to provide a rewarding, educational, and recreational experience by the commemoration and preservation of the historic, literary, legendary, artistic traditions, and the ecological treasure that is represented by Constitution Island and the Hudson River Valley.” Friends of the island and Warners organized the group in 1916 “to preserve the Warner House and its furnishings.”

A rift over management

Its relationship with West Point foundered in 2012, when the Association’s then-incumbent leadership enthusiastically endorsed a plan by Sen. Charles Schumer to turn the island into a national park site, echoing similar suggestions dating back decades. Schumer’s concept involved making the island’s federal overseer the Department of the Interior instead of the Department of Defense and Army, or letting DOD retain nominal jurisdiction while allowing the Interior Department to control the island day-to-day and open it year-around for visitors (while not necessarily terminating West Point usage).

The Defense Department and Army adamantly rejected the national park idea. However, the Association viewed it as a way to save the Warner House, which needs serious repairs. Bitterness ensued.

For the first time in years, in 2013 the Association’s seafood fundraising dinner did not occur on the island. Moreover, Col. Dane Rideout, the West Point garrison commander, allegedly called for the replacement of top figures in the Association, long led by Betsy Pugh as chairperson and Executive Director Richard de Koster. (Col. Rideout, with responsibility over West Point’s building and grounds, consistently declined to discuss the situation with Philipstown.info/The Paper, or to either confirm or deny the statements attributed to him, although he did allow an aide to provide limited information on some issues.)

Likewise, the Army questioned Association plans to establish a visitor center and office on Main Street, wanting it based on Constitution Island instead – a stance that increased the debate over Association desires to use New York State grant money for the Main Street venture.

At the Association’s annual formal meeting Nov. 17, Pugh announced her departure from the chairmanship and the group’s governing board scheduled a separate meeting for Nov. 23 to choose top officers. They picked Osborn, a veteran of local philanthropic and public service positions, as chairman; David Gordon as secretary, and, as treasurer, Vincent “Vinny” Tamagna, Putnam County transportation manager and former county legislator. Also during the board session, de Koster revealed he intends to retire in June.  “As a result of these actions,” one attendee wrote “West Point has approved the Association’s revalidation for two years and once again opened the island to the Association.”

“The United States Army Garrison, West Point, and the United States Military Academy are pleased to announce the revalidation of the Constitution Island Association to operate as a private organization on the military installation,” a West Point spokesman, David Reel, confirmed on Dec. 11. Director of the West Point Museum and the USMA liaison to the Association, Reel stated that the authorization “permits the organization to pursue and fulfill its mission to preserve and interpret the historical legacy of the Warner family,” the 19th-century owners of the island. 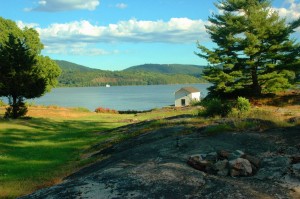 A view of the Hudson from the lawn of the Warner House on Constitution Island (photo by L.S. Armstrong)

The Warner sisters, Anna and Susan, lived on Constitution Island for decades, writing books, gardening, and befriending West Point cadets. Their tenure also led to an early suggestion that the island become a national park. Eventually, as sole heiress, Anna Warner, sold Constitution Island to a friend, Margaret Sage, stipulating that Sage “offer the island to the government for the use of the U.S. Military Academy at West Point,” as Sage in 1908 informed President Theodore Roosevelt (who accepted the gift).

In her agreement with Sage, Anna Warner specified that “nothing herein contained shall be deemed or construed to prevent the dedication or conveyance of the [Constitution Island] premises, or any part thereof, for the purpose of a state or national park….”

While obviously leery of making the island a national park now, West Point sounds amenable to ensuring a level of public access.

“In the future, the Academy would envision the construction of an education center on the island which would benefit cadets, soldiers and the American public,” Reel told Philipstown.info/The Paper. “Such a center would allow the teaching of the Warner family legacy by the Constitution Island Association, and others, to official and authorized groups. Integral to this effort is the refurbishment of the Warner House. The command at West Point has stated they ‘will work with our Association of Graduates and other private organizations, to obtain funds for this purpose.’ This allows for private individuals to participate in funding the preservation and restoration of this treasured site.”

Reel observed the island “is the site of the earliest Revolutionary War fortifications in the Hudson Valley and is open to the public April through October,” by advance arrangement with West Point. He cited heightened security as a concern and also mentioned that “controlled access is paramount for the long-term preservation of this natural and historic resource.”

In the Revolution, the island – named before the U.S. Constitution existed – was first occupied by the Americans, who abandoned it when threatened by a superior force. The British marched in but only stayed about three weeks before likewise departing, allowing the Continental Army to reclaim the island as a base for the massive chain they stretched across the river to deter British warships.

From an Association perspective, Osborn said an immediate goal is “to rekindle a constructive relationship with the U.S. Army garrison at West Point and to work with them to get the repair-renovation of the Warner House underway as soon as possible, with hopes that the public may once again enjoy the facility in time for the [Association’s] centennial in 2016.”

He said that in meeting with Rideout, “the group pledged to work on a new memorandum of understanding between the U.S. Army garrison, West Point, and the Constitution Island Association, with the possibility of coming to agreement by early January 2014 when we plan a meeting with the superintendent,” the highest-ranking official, Lt. Gen. Robert Caslen.

The new chairman indicated plans for the Main Street center are temporarily shelved, until the group decides how to proceed. Accordingly, he said, the Association has contacted the state funding agency, Empire State Development Corp. (ESDC), “and requested a hold on the grant.”

He described as a priority determining “which location of an education or visitor’s center – on the island or in the village – best serves the community and the historic-site visitors and tourists who will be our customers.”

Thus, he stated, the Association “would like to use the ESDC grant toward the construction of an education center on the island or a visitors’ center in the village, pending our determination, working with West Point and the village, of the most appropriate location for such a facility.”

On the island itself, going forward, “we hope to produce events similar to those that we held in the past: re-enactments, garden days, family days, our seafood dinner extravaganza, etcetera,” Osborn added. “We will work out schedules, access, and details with the U.S. Army garrison at West Point.”

Both the Army and the Association deny that West Point forced the departure of Pugh and de Koster in return for restoration of island access and good relations.

“No, there was nothing like that,” Reel said. “It was entirely the Association’s decision.”

Osborn said that for some time Pugh and de Koster had been contemplating retirement, Pugh after some 11 years of service and de Koster after 17 years as executive director.

Pugh emphasized Dec. 14 that her retirement “was absolutely in the works” for months. “That’s a fact.”