Philipstown Town Board members celebrated the arrival of 2014 with a swearing-in ceremony that featured pledges of dedicated service and efforts to involve citizens as the new year and new terms of office unfold. 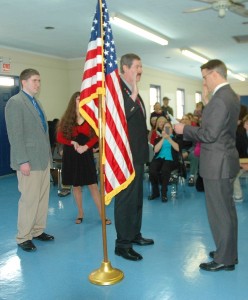 While his children, Michael (left) and Meghan (partly hidden by the flag) watch, Michael Leonard is sworn in by State Sen. Terry Gipson and becomes the newest member of the Philipstown Town Board, in a ceremony at the VFW Hall in Cold Spring on New Year’s Day.

With State Sen. Terry Gipson officiating, Supervisor Richard Shea and Town Board Councilors or Councilmen John Van Tassel and Mike Leonard on New Year’s Day placed hands on a Bible, delivered their oaths of office, and began their tenure as duly constituted members of the current Town Board.

All Democrats, they were elected in November, Shea and Van Tassel to new 2-year and 4-year terms, respectively, and Leonard to his first term of four years after long involvement on three town government sub-boards.

The late-morning ceremony drew about 50 family members and friends to the VFW Hall on Kemble Avenue in Cold Spring, children mingling with senior citizens and young and middle-aged adults, and District 1 Putnam County Legislator Barbara Scuccimarra, a Republican, visiting with numerous Democrats.

News media and Cold Spring Trustees Stephanie Hawkins and Matt Francisco likewise turned out on the upbeat occasion, along with Town Board Member Dave Merandy, who did not face election last fall. 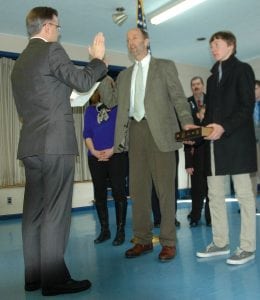 As his son, Nolan, holds the Bible, Richard Shea, elected to a new term as Philipstown supervisor, takes the oath of office, administered by State Sen. Terry Gipson (left), in a ceremony at the VFW Hall in Cold Spring on New Year’s Day.

Gipson got business underway by calling the crowd together. “We’ve got swearing-in to do, so these elected officials can get busy” with their duties on the public’s behalf, he said. “It’s an enormous commitment; it’s a tremendous responsibility.”

After Leonard was sworn in, Gipson smiled and confessed “that was the first one I’ve ever done!”

Van Tassel and Shea followed in the recitation of oaths. Then the three spoke briefly to the audience.

Leonard began, declaring that he took his inspiration from the examples set by his more seasoned colleagues, as well as from Gipson and others who have represented Philipstown in government. He acknowledged his prior service on the Planning, Conservation, and Assessment Review boards but noted that “this is a little different for me. This is my first time in an elected position. For me it’s been a progression” from committee level to an elected post. Throughout his political campaign, he said, he had tried to meet and relate to as many Philipstown residents as possible, “something I will continue to try to do going forward.”

State Sen. Terry Gipson administers the oath of office to John Van Tassel for a new term on the Philipstown Town Board, while John’s son Kevin holds the Bible during the ceremony at the VFW Hall in Cold Spring on New Year’s Day.

He explained that he wants to let his constituents know “what drives me, what my passion is for this town,” and what he wants to accomplish. “Each person is an individual. Each person contributes” in his or her own way to Philipstown, he added, expressing confidence that “with your help, I can do some worthwhile, good things for this town.”

Van Tassel said, “I’m very honored to again serve the town,” promising to hard work in the days ahead. “I’m glad to put 2013 behind us,” he admitted. As a Town Board, “we wish the best for everybody. I’m sure we’ll have a successful community in the next four years. We’ll work together to make that happen.”

Recovering from a Dec. 28 wood-cutting accident that left him with a broken eye socket and cheekbone, concussion, and bruising, Shea, too, described 2013 as “a difficult year.” In recent incidents of hardship and tragedy, “this town stepped forward” in ways no one could foresee, he observed, referring especially to the Metro-North train derailment that took the life of Jim Lovell, who was active in Philipstown in various capacities was the husband of Town Board Member Nancy Montgomery as well as one of Shea’s personal friends. At such times in Philipstown, “it doesn’t matter about politics. It doesn’t matter about any affiliations” in party or belief; everyone pitches in and lends support, Shea said. “And that’s why it’s such a great community.”