Local musicians play in tribute and reflect on lasting inspiration

Two nights this week, musicians spontaneously held tributes to celebrate what Pete Seeger has always done, bringing people together through music. Seeger long served as the musical touchstone for the communities of Beacon and Philipstown. The need for everyone to gather, share stories and sing together was immediate and the outpouring of grief and gratitude for the iconic man clearly resonated.

Philipstown resident and film editor Toby Shimin on Tuesday (Jan. 28) initiated an “Impromptu Hoot for Pete” at The Paper’s office at 69 Main St., drawing about 50 people.

“I knew Pete as many did as an integral part of my childhood,” she said. “I went to the Little Red School House in New York City and every Thursday at assembly we sang Pete Seeger songs. [I wanted] to pay respect to his passing and honor the Hudson River neighbors who he made feel like family. It seemed like a sing-along farewell was the most natural thing in the world to do.” 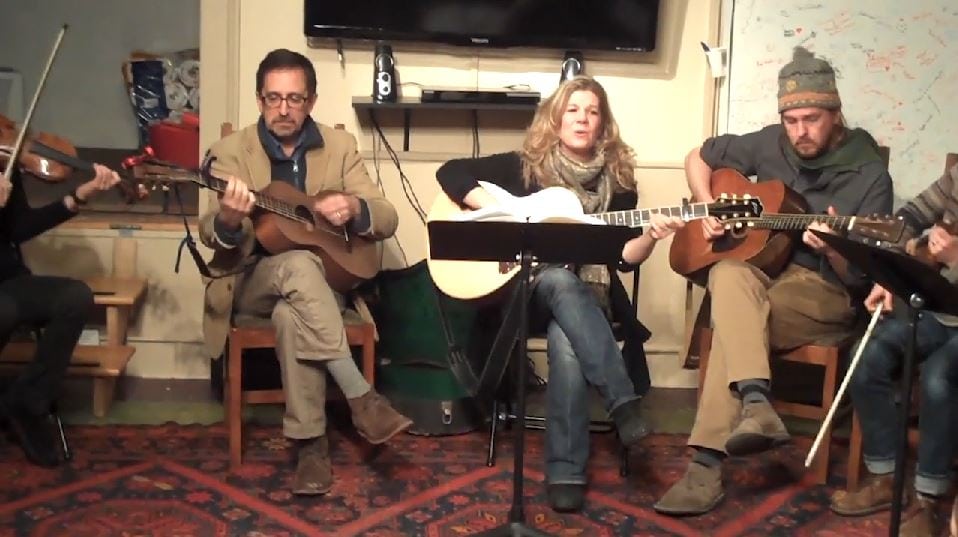 Among the musicians who led the group were Andrew Revkin and Dar Williams, both of whom  had musical relationships with Seeger. “Pete’s greatest gift, even while singing loud and clear, was to generate enduring and radiating circles of song — from the local to the global scale — without keeping himself in the middle,” said Revkin. “One thing I’ll always treasure about him is how he cupped his hand to his ear as a signal for the audience to drown him out!”

Williams spoke of Seeger’s impact upon her own sense of social responsibility through music: “I woke up the morning after hearing the news and thought, ‘Now it’s all up to us’.”

Freddie Martin sang a song he was co-writing with Seeger called “Peace Will Prevail” and the group joined in on the chorus. In his last conversation with Seeger regarding changes to the lyrics, Martin said Seeger said, “…you keep on,” a message he intends to live up to.

Ned and Liz Rauch of Garrison played guitar and violin with the group. Ned said, “I’ve always thought of him as essential to all of us. He was like a redwood tree, there for a century’s worth of people.”

Simultaneously, the Dogwood in Beacon hosted people to sing along and share their stories. “The place was packed with over 100 people, all out to honor Pete. I think we would all agree that Pete’s presence was palpable in the room. For me there was no better way to honor Pete than to lead people in song,” said singer Cat Guthrie. Musician and museum director David Ross added: “It was an important night for people in the area. It’s no mistake that this community is so full of creative, talented and engaged people. Pete was leading by example.” 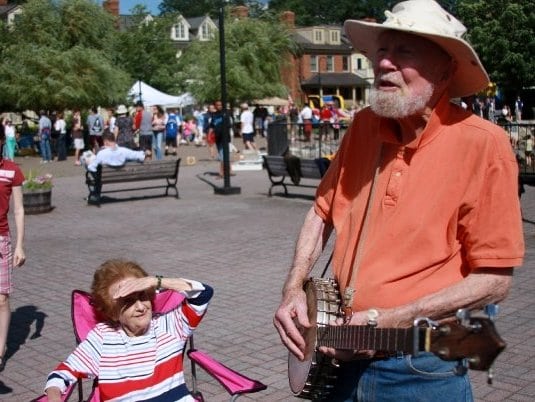 At the Towne Crier in Beacon on Wednesday night, over 300 people filled the room to listen to more than 40 musicians. David Bernz, lifelong friend and producer of some of Seeger’s later work and a member of Work o’ the Weavers, served as emcee for the evening and played a song he wrote for Seeger.

“Pete Seeger championed songs that sought to improve the quality of people’s lives. And when he sang them, and got people to sing along with him, it really happened,” said Mark Murphy, bass player and also a member of Work o’ the Weavers.

Dan Einbender accompanied three of the Rivertown Kids in a song they had learned from Seeger and sung on his Grammy-winning Tomorrow’s Children in 2010. A.J. Lukan, one of the kids, spoke about Seeger: “When I first met him, he seemed like a regular guy. When I got older and realized how famous he was, he was still the same regular guy, gentle and kind.”

Tery Udell, director of Rivertown Kids, writes about the program, initiated by Seeger. “We are honored and humbled to have been blessed with eight years of Pete’s guidance and mentorship. He was and will always be our inspiration in the power of collectively raising our voices in song in the hope of building a better world.”

Musician Stacy Labriola witnessed Seeger’s energy with kids at the annual Little Stony Point Hoot. “As a kids’ music ‘performer’ I know how difficult it can be to wrangle them. He was still able to remember every verse (in order!) to She’ll be coming ‘round the mountain.” Singer-songwriter Kathleen Pemble also a children’s music teacher, recalled how “45-plus years ago, my mom would often take me to see Pete at the Ossining Public Library. I remember thinking he was a total rock star. He had us singing rounds, in harmony … such beautiful childhood memories.”

The first time I met Pete and Toshi Seeger changed my life forever. My wife and I weren’t “comfortable” living in our town when we first moved up. There isn’t a lot of diversity to begin with and we found out that this area has a lot of racist/anti-Semitic history. Pete saw me with my bass on the train platform one day, walked up to me and asked me: “Do you live around here? Do you know about the history of this area?” I didn’t recognize him at the time and I just rolled my eyes and said, “Yeah, I heard about it.” He then began to talk about how because of his music, his environmental and political activism, and his “friends” this area made it difficult for him to live in for many years. He said he stuck with it because of its natural beauty, his family and the strong friendships that developed. He thought that my presence as a local resident (and an African-American musician/teacher) was a very positive development for the community and it would be great if I “stayed in the neighborhood.” He finally told me who he was (which blew my mind) and the three of us rode down to the Bronx together. That experience really inspired us to stay.

Stephen Clair, who runs Beacon Music Factory and Beacon Riverfest, summed up his feelings: “I don’t feel like there’s a hole in the community since. We don’t even know yet the extent that he’s impacted us.”