Tax-positive benefits and other advantages cited

A standing-room-only crowd filled the Cold Spring firehouse Saturday (March 8) to pepper the owner of the old Butterfield Hospital property about its proposed redevelopment, a venture that so far has taken 30 months, generated numerous meetings and produced piles of documents, with no immediate end in sight but the glimmer of one — and shadows of eventual buildings — on the horizon, even as uncertainties remain. 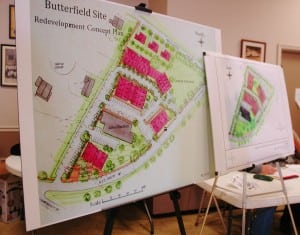 Owner-developer Paul Guillaro, of Butterfield Realty LLC, plans to demolish the abandoned and deteriorated old hospital, on the south edge of Cold Spring, and create a multi-use complex. Joined by his team, from legal, land-use, and construction fields, Guillaro sponsored the Saturday event, billed as an opportunity for the public to “let your voice be heard.”

At least 75 local residents accepted the invitation, inquiring about numerous aspects of the project — everything from the tax implications and effects, if any, on local infrastructure to traffic patterns, timing of construction, county involvement, rezoning, and the presence or lack of elevators in new buildings. Despite the acrimony that permeated some previous mass meetings about Butterfield, politeness characterized Saturday’s forum, perhaps due to the ground rules laid down by Guillaro’s team: Comments endorsing or condemning were prohibited; questions about the project itself were welcomed.

“We’re not here to debate the pros or cons,” Steven Barshov, Guillaro’s attorney announced. “This is about questions. We want to make sure the public is informed.”

On the 5.7-acre site, Guillaro wants to retain the existing Lahey medical clinic while adding three single-family homes along Paulding Avenue; a multi-government municipal building – presumably containing a Putnam County-affiliated senior citizen center-cum-community meeting hall; condominiums for retirement-age buyers; and a commercial “square” along Route 9D, with space for a post office in one of the public-access buildings and a “Gateway Park” on the southwest side. For Guillaro to proceed, the property must be rezoned for multi-usage, a task for the Village Board, whose March 11 meeting agenda included receipt of Planning Board recommendations on a B4A zoning draft. 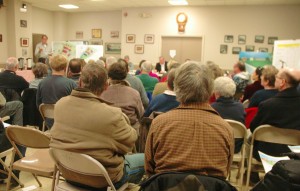 Guillaro anticipates completing the complex in two or three years and said the first facilities built would be the intergovernmental facility and post office quarters.

Configuration of driveways, exact architecture, and various project details remain unsettled; these are typically delineated in site-plan reviews, conducted by the village’s Planning Board, which recently progressed toward that level of activity when it finished an earlier stage, studying the project’s Environmental Assessment Form (EAF). On concluding its EAF scrutiny, the Planning Board declared the project would have no adverse effects on the village and its environmental and overall well-being.

Despite the lack of specificity as to exact looks, Tim Miller, of local consulting firm Tim Miller Associates, one of Guillaro’s advisors, told the gathering that the complex’s design “almost follows the concept that came out of the charrette percent.”

After Guillaro’s initial, late-2011 design prompted criticism, he and the village agreed to a public “charrette” or brainstorming session, held in April 2012, which inspired a new concept by Ray Curran, a planner and illustrator.

According to Butterfield Realty, along with a new senior citizen center-community center and governmental headquarters for village and town departments and Putnam County agencies, post office, housing, the commercial-office “square,” and green space, the complex will provide:

Several audience questions involved the project’s “tax positiveness.” Tax-positive developments generate more in taxes for the community than they cost in providing public services. The project “will be tax-positive,” Barshov said — a view accepted by the Planning Board when it approved the EAF.

The EAF states that “the revenues to the village from the proposed Butterfield Development would amount to a total of $119,706; thus, after covering the cost of municipal services, the project will result in an annual net benefit to the village of more than $60,000.”

There could be “some flex at the end of the day” in the precise level of tax-positiveness, Barshov said. “But will it be tax-positive — absolutely.” Among other things, he said, the complex will generate no school tax burdens because the condominium residents will be retirement-age adults.

Barshov and Anne Cutignola, a senior planner at Miller Associates, likewise discounted fears of a cost to the village if current, older-age residents sell their single-family homes and move to the Butterfield retirement condos and their former homes are bought by families with school children, whose presence drives up local education costs.

“It’s a red-herring,” Barshov said. “We’re not talking about a mass exodus of empty-nesters into this project.” And in any case, “I don’t know if there’s any way of knowing or predicting” how many village residents would move to Butterfield, or whether the homes they leave would be purchased by families with children, he said.

Cutignola said that the purchase of Cold Spring homes by newcomers from residents who relocate to retirement complexes — someplace — probably already occurs; Butterfield would not make much difference.

Similarly, the Butterfield Realty team declared that the project would not hit the village with other infrastructure costs — such as more money spent on the water and sewage treatment plants. “The village engineer has said the systems were capable of handling the sewage and providing water,” Barshov said. Moreover, its residents will pay water and sewer fees, just like other residents, he said.

A chart distributed by Butterfield Realty also claims that the costs of snow plowing, street cleaning, sidewalk repair, garbage collection, and maintenance of the sewer and water pipes serving the condos will be borne by the complex, not the village government and taxpayers, although the village will be responsible for maintaining the “Gateway Park.”

Guillaro said he is committed to working with officials in Carmel so Putnam County fills part of the site and offers services in western Putnam. “The county [government] is at a point where they’re waiting for us to get our zoning” before proceeding, he said. Last fall, Putnam County Executive MaryEllen Odell informed the County Legislature of her administration’s intent to take 5,000 square feet at Butterfield.

While the government presence at Butterfield is expected to increase, traffic problems and pedestrian safety threats are not, the Butterfield Realty team asserted. Miller said a traffic survey revealed that the complex would not bring “any significant change” in terms of traffic delays, intersection congestion, or similar problems. Also, the layout inside the complex “has been designed to be pedestrian-friendly,” he said.

An audience member asked about installing a sidewalk on Paulding Avenue and Guillaro agreed. “If the village wants a sidewalk, we’ll put in a sidewalk,” he said. More crosswalks on busy Route 9D also are a possibility, but cannot be installed without New York State Department of Transportation involvement, the Butterfield team explained.

As for elevators: “There will be elevators in every building,” Guillaro pledged.