Creating an energy-efficient building costs no more than constructing a conventional structure and saves both money and energy. And upgrading a historic house to increase energy-efficiency doesn’t mean sacrificing historic character.

Those were two of the leading ideas emerging Sunday (April 27) at a Community Forum on Energy Conservation, sponsored by the Hudson Highlands Land Trust. Held in Garrison at the Highlands Country Club, the event focused on “Bright Ideas to Save Money and Resources,” and drew about 75 attendees. 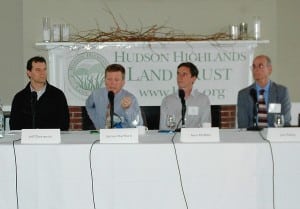 McAfee and Hartford discussed the benefits of constructing “passive houses” and updating old buildings. According to the program, passive houses reduce energy use by up to 90 percent, cost little to heat and cool, are super-insulated, contain other energy efficiency features, and cope with sea-level rise.

“We’re controlling energy. It’s a massive change,” McAfee said. He emphasized that “it doesn’t cost more to do this. It costs the same amount of money. It’s not even a function of money.” He said many of the buildings he works on are historical landmarks and that they, too, can be upgraded to be much more energy-efficient without sacrificing their looks. From the outside, “you don’t even see it,” he said of the energy-efficient enhancements, such as replacing non-energy conserving windows with those that are several times more effective.

Hartford mentioned restoring his own home, built for workers at the West Point Foundry, probably in the 1820s. The Furnace Street house, which shares a wall with its sibling, was totally upgraded, made more energy efficient (with substantial insulation, for example), and now is heated entirely by wood, Hartford said. “You can really make sustainability affordable,” he emphasized. And creating sustainability is possible in structures of all price ranges, Hartford added. “You can make small little houses that are affordable, or you can break the bank,” he said.

He ticked off a series of typical, energy-efficient old-house improvements, such as the repointing of exterior bricks, insulating the attic, using propane instead of oil, improving the water heater, and treating the roof to conserve energy. Hartford, like others, also stressed the importance of proper vapor control and getting rid of clunker appliances in favor of more energy-efficient models. Later, Hartford hosted conference attendees at a new, passive house designed by River Architects and under construction in Cold Spring at the entrance to Dockside Park.

Domanski outlined forms of assistance from NYSERDA for homes, businesses, and institutions. “There’s a lot of folks I can help … help take action” on their properties, he said. “There are incentives,” including financial aid, Domanski said.

Fahey described West Point’s efforts to become more energy efficient, including rehabilitation of older barracks and construction of a new one designed with such features as solar power and triple-glazed glass. He also assured neighbors on both sides of the Hudson River that the military academy weighs the impact of its projects on viewsheds — “how you look at West Point from across the river. For every major project we do take a look at viewsheds” and “listen to the community and take their comments into consideration,” Fahey told the audience. That doesn’t mean they will scrap a project, but West Point will attempt to accommodate neighboring communities’ concerns, he said. 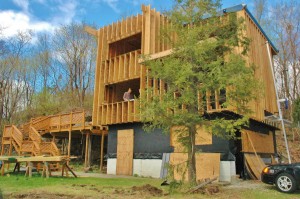 Architect James Hartford, in second-floor window, and his firm designed the passive house under construction in Cold Spring.

“Most of you want to keep the windows you have because they look nice,” Klocke observed. Among other window-oriented tips for conserving energy, he and McAfee suggested installing interior storm windows, preventing air leaks, and using heavy curtains.

Klocke also noted that heat-pump technologies offer new ways to heat homes. “It’s getting cheaper; and it’s getting more efficient” and doable even in cold climates, he said.

McAfee and Klocke likewise recommended replacing incandescent lightbulbs with more efficient types, weather-stripping around doors, closing holes around radiator pipes, caulking, and — again — reconsidering appliances. “Refrigeration is one of the more [notable] energy-guzzlers,” said McAfee, who also advised awareness of the implications of such amenities as wine-chillers. “Everything you plug into a wall takes up energy.”

Panelists also predicted that “passive” construction and energy-conservation techniques soon will become common practices and be reflected in laws, such as building codes.

“The innovation is exploding. Everything I’m doing is going to be the norm in five years,” McAfee said.

Hartford pointed out that European countries are well ahead of the United States. “It is code in the entire country in Belgium,” he said, citing one example. “It is possible and it’s happening. So we have to catch up.” And as the United States does advance, “I think the construction industry is going to be in for a rude awakening,” he said.