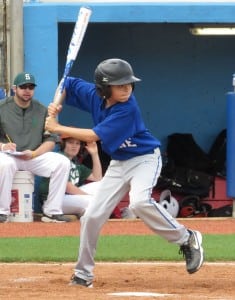 Matthew Mikalsen loads up at the plate in Haldane modified baseball action May 2 at Dutchess Stadium.

Both Haldane modified and varsity baseball played at pro stadiums last weekend on Friday (May 2) at Dutchess Stadium and Saturday (May 3) at Boulder Stadium in Pomona. The thrill of playing on a pro diamond hopefully compensated for losses.

Modified basketball and volleyball are slated to be eliminated in the fall of 2014 due to budgetary concerns in light of reduced New York State funding for the 2014-15 school year. At the May 6 Board of Education meeting, parents and students spoke of the importance of a modified sports program, which offers middle school students supervised activity in the after-school hours as well as promotes bonding among students and with their coaches.

Speakers referenced the community’s concerns about adolescent drug use as sometimes connected to a lack of positive extracurricular opportunities. Supporters say a modified sports program not only teaches skills and trains teams to achieve at a varsity level, it also, as a graduating senior commented, develops bonds between peers.

May 6 was Senior Night for Haldane’s lacrosse (LAX) team, the last game played on home turf for eight seniors. More than a third of the team — Will Moss, Tommy Colamarino, George Fibble, Aaron Culotta, Russell Cox, Anthony Medina, Brandon Rucker and Jas Rajendran — end their Haldane careers this season. Haldane varsity LAX, down 6-10 against Carmel, turned the tide and pushed the game to overtime with goals by Moss and Fibble in the final seconds. Fibble scored the game-winning goal for the 11-10 finish. The crowd’s cheering could be heard from blocks away.