Kieran Austin is the Haldane High School Class of 2014 Salutatorian. He will attend Harvard College in the fall. He is undecided about his major and career goals but knows that he is likely to pursue some form of graduate education after his four years as an undergraduate.

Asked for a quote about his high school career at Haldane Kieran stated:

As clichéd as it may sound, I think what distinguishes Haldane is all of the little things that make people’s experiences here so personalized. Whether that comes from the principal personally greeting everyone outside every morning no matter what the weather is, teachers who during their free time put their efforts into your singular situation, or even having a superintendent of the district stop you in the hallway for casual conversation, each student at Haldane gets a sense that the administration, faculty and other students are genuinely invested in you as a person, and I don’t think that’s something students can really appreciate as much elsewhere.

Kieran is a 2014 National Merit Scholarship Finalist, as well as an Advanced Placement (AP) Scholar with Honors. He spent two years participating in the Columbia University Science Honors Program. In sixth grade he was a member of the Destination Imagination (DI) team that won the World Championship for Middle School in Knoxville, Tennessee. He was also a member of the Butterfield Library Battle of the Books team that won the mid-Hudson championship twice. 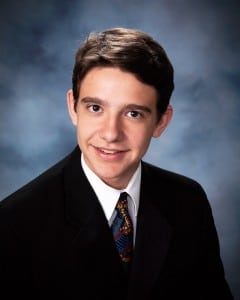 Kieran was a Philipstown Garden Club summer horticultural intern at Stonecrop Gardens and also worked as a tree assessor for the Cornell University Cooperative Extension Cold Spring Tree Inventory. He participated in the Tufts School of Veterinary Medicine immersion program and spent a number of years as a volunteer intern at the Animal Hospital of Cold Spring. He was a Teen Peer Media Health Screening Intern for the Desmond-Fish Library. Kieran was a participant and then a Counselor-in-Training (CIT) in the Building Bridges Building Boats program, was a CIT at Manitoga camp, rowed in the Great Hudson River Paddle and was a volunteer at the Clearwater Festival.

Kieran served as president of the National Honor Society senior year and was vice president of the Student Council junior year. He has been on the Principal’s List every quarter since he was eligible and is in the Haldane Academic Hall of Fame. He completed 11 AP classes, including one taken independently through the Virtual High School and took four other Virtual High School online classes. He received the U.S. Citizenship Award, the Literary Magazine Award, Outstanding Achievement Awards in Creative Writing and Instrumental Fine Arts as well as a number of highest average awards. He was co-editor of the Literary Magazine. He earned the Air Force Recruiting Service Mathematics and Science Award for outstanding academic achievement and the Xerox Award for Innovation and Technology.

Kieran performed at the New York State Music Festival solo performance assessments for piano at the highest level for three years. He played first trumpet in the high school band and jazz band, was rehearsal pianist for a school musical and acted in several productions. Kieran took part in the International Club, Environmental Club, and the Poetry Out Loud competition. Sports-wise he ran varsity cross-country for four years and was on the track team for two.

The Haldane administration congratulates Kieran and his family on all of his achievements with best wishes in his future endeavors.