Argument branches out to audience

At Tuesday’s (June 24) Cold Spring Village Board meeting, Trustee Stephanie Hawkins read a light-hearted, prepared statement describing how, with Mayor Ralph Falloon’s approval, she is tending to a “sickly” red oak. The tree, purchased by the village, was not used in recent plantings because it has a fungal infection. When Hawkins revealed that she keeps the tree in her garden, Trustee Michael Bowman took exception. Drawing in audience members, the heated discussion that followed was anything but light-hearted.

Resident Kathleen Foley, the most vociferous audience member, asked Bowman: “What is the controversy here?”

“To have what amounts to a piece of village property put onto … private property. Can I go visit?” Bowman responded, noting that “it’s a public tree.” 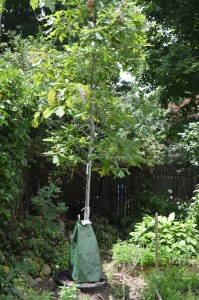 The controversial red oak Hawkins is tending to while it recovers from a fungal infection.

The discussion clearly involved more than a sick tree. “There seem to be two issues of late that consume tremendous amounts of time at this table. One is trees,” Foley said, and “the other is [the] NYSERDA [grant].” She added that “I’m perplexed” as to “why it is that the only parties … fretting about money to complete” the Comprehensive Plan and provide a tree nursery “seem to be the [PCNR] newspaper and the two of you [Bowman and Fadde] who ran against a candidate that Stephanie supported.”

According to Foley, the two new trustees’ reaction appears “nothing more than retribution,” with the pair “spending so much time raising controversies that are not real.” In the village “we have very important municipal work to do. It’s nonsense,” she asserted.

Bowman claimed he and Fadde are left out of the conversation. “I found out that trees were being planted on Main Street because I saw it on Facebook. There is a tree ordinance being drafted … that I don’t believe the Village Board ever charged the committee to draft.” Village Attorney Mike Liguori interjected that the Village Board had passed a resolution authorizing the Tree Committee to do so.

“You are creating controversy where there is none,” Foley continued.

“Absolutely not,” Bowman answered. “I find it quite funny that the people in the audience that are yelling at me right now are also of the political side that I ran against. I thought we were supposed to get beyond all this.”

Addressing Foley later, Bowman said “I don’t ever want to feel I can’t ask good questions.” Furthermore, “it’s legitimate,” he contended, “for people to know where [village] property is.”

Hawkins jumped in, telling Bowman he need only ask about issues — including the NYSERDA grant.

When Bowman said he had sent “email after email” requesting that information, Hawkins countered that the village clerk had provided NYSERDA materials to him in April. Bowman also complained that last week’s meeting was the first time he had seen the final NYSERDA contract.

“That was the first time anyone [on the board] had seen that version,” Hawkins replied. She also said that “all of us, including yourself” had received the draft NYSERDA contract April 10. Bowman said he had not received it.

Much more than trees were on the minds of those in attendance at Tuesday’s Village Board meeting.

Foley told Bowman that his questions are “framed as implications of wrongdoing.” When Bowman asked for an example she pointed to his inquiries regarding the sickly tree. “The question was not, ‘Stephanie, I understand there’s a municipal tree in your yard — what’s the story?’” she maintained. Rather, she continued, “the implication was, ‘have you taken municipal property?’ The implication has consistently been that there is wrongdoing, where there is none … it evolves to a degree of character assassination.”

Bowman disagreed. “If we want to talk about character assassination, since January, nobody has been more assassinated in this village than myself and Cathryn,” he said. “It’s gotten to the point of being humorous … that I’m somehow associated with the PCNR, which is a complete joke … .” He referred to others “hammering away to try to shame me to shut up by saying ‘you guys are part of the PCNR crowd.’ Give me a break. The fact of the matter is the tree issue has been politicized and not on this side of the table.”

“I think we should be a little more forthcoming in our disclosure,” said Fadde. “The trees look nice” but “if we all know what everyone is up to” it’s better, she proposed. That way, “when someone asks me, I can say: ‘Stephanie went out and got these really great trees … as opposed to, ‘I don’t know,’ which makes us all look ridiculous.”

Numerous times, the board has discussed increasing the $2-per-foot fee charged to commercially-operated boats using Cold Spring’s municipally-owned dock — especially given the number of vessels that visited last fall. On Tuesday, trustees tentatively agreed to raise the fee to $3 per foot during peak periods, essentially weekends, while maintaining the $2 fee on weekdays. They stopped short of passing a resolution formalizing the increase because Fadde’s negotiations withSeastreak continue.

During the public comment period, residents urged trustees to consider the impact of increased cruise-boat tourism on village infrastructure, rather than basing fees solely on the operator’s projected revenues. One issue is the amount of stress cruise boats exert on the dock, especially when they “raft.” (Three boats tied up to each other with only one tied to the dock.) The dock’s bollards then bear the force of three boats, a concern in rough waters.

While Seastreak officials indicated that rafting causes no undo stress, Trustee Hawkins commented: “It makes sense to hire someone [for a professional opinion] rather than rely on the customer.”

“It would be remiss to rely on them,” Fadde agreed. Bowman suggested that the U.S. Army Corps of Engineers be contacted for a technical opinion.

The meeting featured another lengthy discussion of “BigBelly” trash compactors. The solar-powered units, costing about $3,000 each, have a greater capacity than traditional garbage bins, which could reduce overtime paid to village workers emptying the containers on tourist season weekends. Workers receive a minimum of two hours’ pay, even if the overtime is for a shorter period. The village considers overflowing trash a significant problem on the riverfront and Main Street.

Fadde said county officials are interested in purchasing one compactor for the village. A central issue has been whether or not the cost of that compactor would be in addition to the annual grant or deducted from it. Tamagna indicated that the grant money could be used to purchase one compactor with the balance used for overtime.

“We need to study” use of the compactors “and should start with one,” Bowman suggested. Later, Fadde asked Tamagna if the village might get two units from the county. “I would ask for it. Ask for $10,000 to buy two, plus overtime,” he said.

Donald Lusk may be smiling

Building Inspector Bill Bujarski has received complaints recently about signs posted along Chestnut Street at Main Street between the sidewalk and the roadway. However the Village Code section on signage cannot be enforced; an appeals court struck it down after, in 2005, Main Street Donald Lusk challenged its application to placards he put on his porch, protesting the riverfront townhouse project.

Liguori will review rewriting the invalid section. Nonetheless, the signs in question may be illegal because signs cannot be placed on a state highway right-of-way; Chestnut Street is part of Route 9D, a state road. Bowman commented that Lusk would chuckle knowing that the signage issue is again being discussed. Lusk died in 2010.

The board scheduled a public hearing July 15 on selling The Grove, the historic, village-owned property. Next week, trustees will consider a resolution to set the price at a minimum of $5,000.

Trustees waived the 30-day waiting period on a liquor license application for 54 Main St., formerly McGuire’s-on-Main. The site will reopen soon under new ownership and with a new name. The application refers to the coming establishment as Doug’s Pretty Good Pub.