In a room a-bloom with color, a peachy glow comes from Colleen and Lowell Kavana, the almost-newlywed (just over a year) couple who have opened a small shop filled with positive spirit called, simply, Zen. If newlyweds conjures up images of a couple of 20-somethings, the Kavanas are a reminder that this isn’t always the case. A second marriage for each (he was a widower, she was coming out of a self-described very bad marriage) was the impetus behind the opening of their store, as they’d like to spend as much time as possible together, enjoying each other’s company. 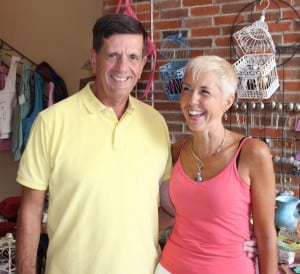 Lowell Kavana, a resident of Cold Spring for over 30 years, who calls himself “quite a bit — well not that much” older than Colleen, was retired, and Colleen was definitely not ready to join him. Rather than taking on a job, which would keep them separated for most of the day, they’ve teamed up together instead, and that’s what Zen is all about.

Working alongside each other on the Fridays, Saturdays and Sundays that the store is open, in a low pressure, friendly environment, affords them the time for their other pursuits: biking, swimming — together. It also allows them time spent with their grown-up Brady Bunch of a family — they each have three children and between them they now have nine grandchildren, with another on the way.

The couple’s obvious affection for each other belies the tough times each has had in the past. Lowell experienced the loss of his first wife to cancer 15 years ago, and 10 years ago Colleen suffered a terrible accident when her scalp was severely burned during a hair salon appointment gone terribly awry. Sixty-two surgeries later, she has learned that most battles are small ones now. “I worked myself back through all of this.”

One of the surgeries resulted in a temporary memory loss. Colleen says she felt altered when her memory returned, “Something changed when I came back; I can do more now — it just comes.” The freeform boards filled with writings related to healing and surmounting difficulties on walls of Zen attest to this. They were put up as decorations, but people have been reading them and have surprised the Kavanas by asking if they can be purchased.

A colorful table display includes plates and other glassware designed by Colleen Kavana.

Colleen, who moved to Cold Spring two years ago, is a certified yoga instructor and describes herself as very creative. For years she has crafted designs on T-shirts and bags, selling them through her yoga practice and online. She wasn’t satisfied, recalling, “I hated not dealing with customers … I wanted a purpose.”

With Lowell retired from his career in the budgeting realms of the railway industry (his last employer was Metro-North), the couple was not looking for a six-days- a-week business and they are not working together out of the financial necessity that drives many young couples opening businesses. “It doesn’t have to be every day,” says Colleen, “not a 9-to-5 kind of thing; this is a perfect combination.” Lowell adds: “We have no pressure — it is what it is.”

Colleen designs much of their merchandise. “I’m all about the pretty,” she declares. In addition to the T-shirts made from bamboo, which feature writings by Colleen as well as her designs, there are similar tote bags along with color hand-painted tableware (which can be custom-made to order), and other objects associated with a Zen state of being, such as a large selection of tea leaves — all organic and sourced from Teatulia, a Denver-based supplier of teas from Northern Bangladesh — and sample-sized containers of jams to go with them — all that’s missing are the scones and crumpets. 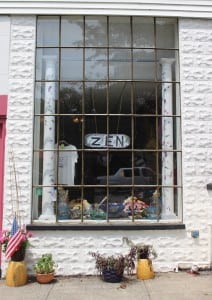 The exterior of Zen, located on Main St., Cold Spring.

Colorful napkins and pitchers round things out, along with tea accessories like strainers. “We wanted to have a place with pricing where anyone can find something,” Colleen says.

Resourcefully constructing nearly every piece of “furniture” in the store out of found objects — doors, odd pieces of wood, the small store has a sunny weather resort-like quality to it, and has attracted tourists (“a lot of Brooklyn the first week,” Lowell says, “but then Europe, and one lady from Alaska”) and locals alike in its short life thus far (they opened in mid-July).”

“Everything in the store is soothing,” Colleen says, “and that’s the Zen.”

One thought on “For Colleen and Lowell Kavana, Their Zen Is Achieved Together”