A group of 16 Garrison high school freshmen may be doing their homework in Philipstown come next Wednesday, Sept. 3, but they’ll be learning in the classrooms of James I. O’Neill High School across the river in this new academic year. Students will make a “Fresh Start,” the theme of O’Neill’s Freshman and New Student Orientation held Wednesday (Aug. 27), as they invest in the next chapter of their education. 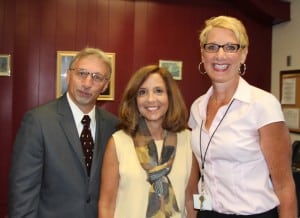 Highland Falls Fort Montgomery Central School District’s high school welcomes 142 students to the class of 2018, and values the opportunity to partner with families from Garrison to teach their children.

“It’s a big class,” said O’Neill Principal Louis Trombetta. Trombetta noted that this year’s number of Garrison students is larger than usual. “It’s trending upwards and hopefully it will continue.”

“His (Christian’s) dad graduated from here (O’Neill) and I graduated from Haldane,” Mayo said. “Christian was pretty set on coming here. Their presentation was impressive.”

Valerie Young of Garrison also gave her daughter, Desi, the opportunity to make a choice on school selection.

“Desi thought long and hard about her decision,” Young said. “In her mind this was the only right decision. She wanted the opportunity for independence, to have opportunities academically, socially and athletically. She felt that this school supported every child as an individual.”

O’Neill Assistant Principal Robin Haberman said that making the important choice of where to attend high school is often a family decision, and O’Neill furthered their outreach to prospective students and parents this year.

“I think the kids are a huge part of the decision making,” Haberman said. “We hosted a [Garrison School] visit in January. They see some of the older students who share their positive experience. With our presentation, it helped solidify the decision.” 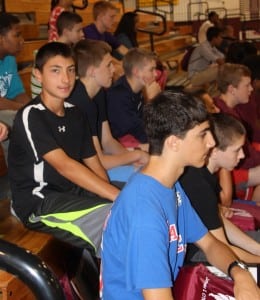 O’Neill student Carly Lawless of Fort Montgomery addressed students and parents in the auditorium during the orientation. She said the immersion of students from the Highland Falls, Garrison and West Point communities contributes positively to the O’Neill experience.

“When I first came here there were only three or four students from Garrison,” Lawless said. “I think this year is awesome with so many. Our Student Council presented the Garrison skit and this year it was really good.”

O’Neill Guidance Counselor Patricia Lofaro said that students, staff and faculty came together with a renewed enthusiasm to heighten awareness of O’Neill’s atmosphere from academics and clubs to music, Junior ROTC and athletics.

“We wanted to present a comprehensive overview,” Lofaro said. “They’re making a choice that’s going to impact their life. I take pride in meeting all my families and sitting down with them to start connecting early on.”

As she strolled around the gymnasium, hallways and cafeteria where scores of O’Neill students were leading workshops, answering questions about extracurricular activities and acting as ambassadors, she extolled the amenities of the school and the spirit of the community.

“We’re a small school,” Lofaro said, “but we have a lot to offer. “The Garrison students come well prepared and adjust beautifully to the school.”

Being prepared in high school was one of the signature messages echoed throughout the orientation. Keynote speaker 2nd Lt. Alex Brammer, a 2014 graduate of West Point, shared his own high school story. Brammer grew up in an unstable environment and was pulled out of high school before he even learned the purpose of a student council.

When he realized that racing dirt bikes and moving on without a high school education would present few opportunities, he began to work to achieve his own small miracle. When he turned 18, he joined the Army. Through a long process and service to the nation, Brammer made his way to West Point and will continue his studies in economics later this year at King’s College in London.

“My story could have gone wrong at so many points,” Brammer said. He faulted his own actions for failing to make the most of his high school education, but stressed that parents play a big part in helping their children navigate life.

“Preparation, communication and determination matter every single day,” he said. “My advice and plea to you today is to make a fresh start and above all, apply yourself in the classroom.”

Orientation speakers emphasized the importance of traditional organizational skills. Though each student will have his or her own Google Drive account, notebooks, paper and textbooks still play a part as key tools for students. And the school promotes the SOAR philosophy: Set Goals, Organize, Ask Questions and Record Your Progress, all while keeping organized with a meticulous binder system.

In addition to maintaining organization, Principal Trombetta, speaking to parents in attendance, shared what he termed as two keys to success.

“Please have your children involved in our community and in school. And the second thing, believe it or not, is the dinner table. Families that eat together see more success. There’s a high correlation of these two things,” Trombetta said.

Several of the Garrison students are already suiting up in maroon and hitting athletic fields. Athletic Director Debra Crowe said that the district has 22 sports, noting that women’s golf returns this year.

Parents of students from Garrison turned out with school spirit at the Freshman and New Student Orientation Aug. 27 at James I. O’Neill High School. From left, Chrissy Colasurdo, Valerie Young, Lori Mayo and Melissa Green.

“One of my goals is promoting spirit and involvement,” Crowe said. “Playing sports can be a very rewarding experience. If you don’t play sports, there are other ways to get involved, as a team manager or scorekeeper.”

Keith Wimer of Beacon is happy with his son’s high school decision. A 2014 graduate of the Garrison School, Josh Wimer is looking forward to participating in Raider athletics.

“It was completely Josh’s choice,” Wimer said. “He plays soccer, golf, tennis and baseball, and he wants to continue. He had a chance to go to private school but he chose O’Neill.”

“I like it a lot already,” Champi said. “I’m looking forward to the sports and I’ll be playing soccer, basketball and lacrosse.”

Champi’s classmate Alex Mancuso is starting the year off with enthusiasm as well. His mother, Kim Mancuso of Garrison, said that Alex looked forward to the sports, academics and music programs.

“Alex wanted to come to O’Neill because many of his friends were coming,” Kim Mancuso said. “I like the cultural diversity here and the programs are just what my son wanted.”