A letter to the Cold Spring Village Board from Anna Georgiou, special counsel to the Cold Spring Planning Board, drew intense scrutiny at the board’s Oct. 21 (Tuesday) meeting, a marathon session that lasted past 10:30 pm. The letter deals with concerns raised by four Planning Board members at their Sept. 17 meeting over their inability to comment on the “mass and scale” of the Butterfield project.

Although marked “Privileged and Confidential,” an unsigned copy of Georgiou’s letter appeared in the Oct. 15 issue of the Putnam County News and Recorder, adding fuel to the firestorm surrounding its contents. Discussion of the letter had been postponed at the Village Board’s Oct. 14 meeting, giving trustees and Village Attorney Michael Liguori time to read the correspondence, dated that day. Cold Spring Mayor Ralph Falloon termed the leak “a betrayal,” which, while it “doesn’t change a thing,” was “hurtful and disgraceful.”

“The problem for me is that [the letter] is from our attorney,” Trustee Stephanie Hawkins commented. “They said … they were the only people who had it and yet it somehow made its way to the newspaper. I think that calls into question the integrity of their office … I want to believe them, but it casts doubt.” 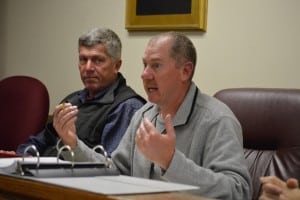 Trustee Cathryn Fadde disagreed. “Do you really think that someone from the law office would actually leak this?” she asked. “What possible gain would they have? I just can’t imagine any law firm doing that.”

While the leak evoked curiosity, attention focused on the letter itself, in which Georgiou commented on the Planning Board’s authority during site-plan review. “Trustee Hawkins believes that there may have been some confusion by yet to be identified Planning Board members,” Georgiou wrote in part.

Hawkins questioned that statement. “I’m concerned that the attorney who drafted [the letter] was the attorney who sat at meeting on Sept. 17 and heard from [Planning Board members] Arnie Saari, Karen Dunn, Ann Impellizzeri and James Pergamo — all expressing confusion and frustration,” she said. “[That] raises questions as to why she would refer to them like that when she had substantive discussion with them.”

The Planning Board members’ discontent involved being told that they could no longer comment on the mass and scale of the Butterfield project — after thinking they could do so during the site-planning process.

During the public comment portion of Tuesday’s meeting, Cold Spring resident Michael Robinson supported Hawkins’ contention, quoting the four Planning Board members from a recording of the Sept. 17 meeting. He quoted Dunn saying to Georgiou: “As we were going through the EAF [Environmental Assessment Form] we were all concerned about the mass and the bulk” of the project. “And Anna, you kept saying to us and Chuck [Consultant Chuck Voss] kept saying, we can talk about [it] when we get to the site plan.”

Robinson read similar quotes from Saari, Impellizzeri and Pergamo. “Quite apart from the leak of the letter, something smells very wrong here,” he said. “That letter was political. It was scapegoating Stephanie for a road that she [Georgiou] led that Planning Board down.”

Frank Haggerty, who often attends village meetings, supported Robinson’s assertions. “For this letter to state what it states is very troubling because it does not correspond with [what] I heard at Planning Board meetings,” he said. “The attorney at this point, quite frankly, is not very credible … it really appears that the lawyers are complaining that the village has a mind of its own. This is just very convoluted and just not right.”

Hawkins asked Planning Board Member Dunn, in attendance at Tuesday’s meeting, if she could comment. However Dunn replied that it was “neither the time nor the place” and suggested that questions be asked at the Planning Board. Hawkins said that she would do that but that Planning Board Chair Barnie Molloy does not allow questions at the meetings.

Doubts about Planning Board being misled

While visibly upset over the leaked letter, Falloon was less troubled over claims that the four Planning Board members had been misled. “From a legal standpoint, the vote happened,” he said. “The ‘neg dec’ happened and they did not come running or screaming about being misled.”

The Planning Board voted 4-1 in favor of a “negative declaration” as part of the New York State Environmental Quality Review Act (SEQRA), indicating that the Butterfield project would have no significant environmental impact. Mass and scale could have been identified as an environmental concern as part of SEQRA. “I don’t understand … if four of the five [members] had a problem, how did it pass?” Falloon asked. “The question is do we want to rescind the ‘neg dec’ and go down that road?” It was clear he does not favor such a move.

Trustee Michael Bowman also rejected the argument that Planning Board members had been misinformed. “All of the Planning Board members were at a joint meeting [along with the Village Board] at the fire hall when mass and sale were discussed,” he said. “From Day One the Village Board had the option to be the lead agency [but] we turned it over to the Planning Board, the planning experts, and the experts voted 4-1 in favor of the negative declaration. I don’t see where the confusion comes from … if four of the five members stopped me on the street saying they were misled I’d have a whole different opinion — but not one of them reached out to me.”

Bowman also sees no need to reconsider the scale of the Butterfield project, pointing out that the concept plan predates the current Village Board by almost two years. “The mass and scale isn’t a huge deal to me — it’s what it’s going to look like aesthetically, what the HDRB [Historic District Review Board] is going to decide that’s more important.”

During public comment, former Trustee Matt Francisco addressed the leaked letter. “You have an attorney who says she maintained the chain of possession, yet a letter is out without a signature on it … there’s a real problem here,” he said. “I ask that you convene an ethics board to determine the source and intention of the leak and further to give voice to the Planning Board members [who] raised serious SEQRA process issues directly relating to Special Counsel Anna Georgiou.”

Francisco found an ally in Bowman. “I agree 100 percent that there needs to be a standing Board of Ethics,” Bowman said. “There are many issues that could be vetted” through such a board, he added. The ability to establish an ethics board is contained in the Village Code and Bowman seconded Hawkins’ motion to do so. After considerable discussion, however, they withdrew their motion. Trustees opted instead to invite Bob Bickford, chair of the Putnam County Board of Ethics, to attend a village workshop to discuss the creation of such a board.

Some at the meeting felt that there is still room for negotiating mass and scale at Butterfield. Resident Phil Heffernan recalled that when the old lumberyard was developed there was opposition to the bulk of the initial concept for the riverfront condominiums – ultimately constructed by Butterfield developer Paul Guillaro. Heffernan said that there was a “tremendous positive outcome” after some three years of bitter fighting as a result of “a massaging of the site and [its] density.”