Chris Darman recently took over Carlson Construction, purchasing the business from longtime Philipstown area builder Stephan Carlson. Just finding a job is a challenge for most 24-year-olds in the current economy. Few take on the added weight of starting their own company. But for Darman, a Cold Spring resident, doing that was “a logical decision.”

The road to establishing Darman Construction can be traced to one day — Darman’s graduation from Haldane High School in 2008. “It was a very proud day,” he recalled. “I graduated on Saturday, got a job and started working for Steve on Monday.”

Darman is clear about why he chose to take over a construction company. “I really enjoy carpentry,” he said. “I like how it combines the physical aspect with math — and a lot of creativity,” he said. “I want to be the best I can be.”

Carlson left Cold Spring earlier this year and is now living on Big Tancook Island, Nova Scotia. Contacted by The Paper, he said he’s confident that Darman will do well. “He’s wide-eyed and energetic. And he’s willing to take on any challenge,” he said.

Working with Carlson, Darman learned the trade through home building, reconstruction and renovation projects. One of the most challenging and educational was the disassembly and reconstruction of the historic Little Red Chapel, which was moved from its location on Route 9D south of Garrison to the northern end of Philipstown. “The hardest part was the re-assembly,” Darman said. “The layout was changed a bit, and we had to redo joints that used wooden pegs.” 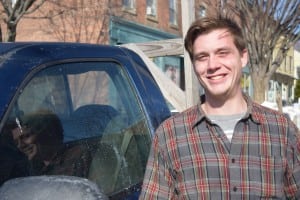 Darman took over the business in early January, purchasing all of Carlson’s tools and equipment, not the optimal time of year to start a new construction business. “With the snow it’s a little slow. But all things considered, I feel good. If it stays like it is, I’ll do fine,” Darman said. One advantage he sees with winter is the effect of ice and snow on roofs. “If you have a leak, you know it,” he said, adding that he already has three or four roofing jobs in the works.

Accomplishments have been small thus far, but they have been meaningful to Darman. “Just seeing the LLC (limited liability company) papers, realizing that Darman Construction is an actual entity — that was very rewarding, a really great moment,” he said. On the other hand, he has been surprised by the amount of time it takes to handle the paperwork and “bureaucratic” aspects of running a business — from licensing and insurance to bookkeeping.

His youth is a factor that Darman realizes he must deal with. “I know there are guys out there with 30 years’ experience,” he said. “But my age also shows how determined I am. People think I’m older, and when they ask, they’re a little surprised!”

Asked what advice he might give others his age who are considering going into business, Darman had this to say: “Make sure it’s something you really want to do. It’s not a hobby — it’s a career. It’s 100 percent of your time, every day. And if it is something you want, don’t let anyone tell you not to do it. It’s definitely an exciting journey.”

Baby Breath Bridal Services, a Cold Spring–area business owned and operated by celebrity makeup artist Heather Canavan, was named winner of a 2015 WeddingWire Couples Choice Award earlier this month. The awards are unique in that they are based solely on reviews submitted to the WeddingWire Network’s website by up to 2 million newlyweds. Winners rank among the top 5 percent of wedding professionals in the network, which includes 200,000 wedding professionals across North America and abroad. Leading wedding sites such as Martha Stewart Weddings, Project Wedding, Brides.com and Weddingbee are among its members. 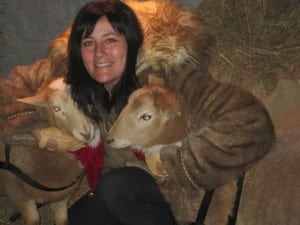 Canavan has been in the makeup and hair business for 26 years. Prior to making the switch to work with brides, she was a celebrity makeup artist for such stars as William H. Macy, Barbara Eden, Jamie Fox, Robin Williams and Pat Benatar.

“If you think [celebrities] are a tough crew to please, brides are in a league of their own. After all it is their big day,” Canavan said. “To be recognized by the wedding community is a real accomplishment and honor.”

But it was neither celebrities nor brides-to-be who helped Canavan win one of television’s most coveted awards. “Ironically, I won an Emmy for Fox Studios East for work I did on a show called The Pet Department on FX. Right up my alley!” she said.

It was “right up her alley” because Canavan’s other passion is serving as president of Shepherd’s View Animal Sanctuary, located at her home and surrounding property just outside Cold Spring.

The mention of animals quickly turned her attention away from awards to the sanctuary’s needs. “Feed costs twice as much in winter and we need donations,” she said, adding that contributions can include money but also hay, grain, cat food and cat litter.

The 45 animals currently being cared for at Shepherd’s View include several goats, sheep, ducks, chickens and rabbits along with a turkey, a parrot and a pig. “We really need homes for the bunnies,” Canavan said. The sanctuary will host an adoption day this spring.

“Make sure it’s something you really want to do. It’s not a hobby — it’s a career. It’s 100 percent of your time, every day. And if it is something you want, don’t let anyone tell you not to do it. It’s definitely an exciting journey.”

4 thoughts on “A New Business Is Born, a Second Earns Award”