With Philipstown residents urging it on, a Putnam County legislative committee last week threw its unofficial support behind environmental efforts on three major issues — trains that carry volatile fuel oil along the Hudson River, the proposed Algonquin gas pipeline, and PCBs in the Hudson and adjacent waterways — and began considering a fourth, a ban on plastic shopping bags.

Meeting Wednesday night (Feb. 11) at the county office building in Carmel, the Health, Social Educational and Environmental Committee (Health-Environment Committee, for short), joined by several other members of the nine-person legislature, agreed to prepare resolutions expressing county concern about the hazards associated with the oil trains, which currently run on the Hudson’s western shore, and a thorough cleanup of PCB pollution in and near the Hudson River.

They also endorsed the dispatch of a letter, due in Albany by Feb. 27, urging New York State to reject an application for expansion of compressor stations as part of the pipeline project. The pipeline company seeks an expanded station in the Putnam County Town of Southeast, despite opposition from citizens who claim such compressors disseminate perilous pollution. Legislature Chairman Carl Albano, who is not on the committee, had circulated a copy of the letter and asked the committee to put it on the agenda.

The separate resolutions on oil trains and PCBs would go to the full legislature for a vote.

County resolutions and letters would have limited legal reach, since oil trains, interstate gas pipelines, and PCB eradication involve state or national agencies and laws. Nonetheless strong positions on such “green” issues by the all-Republican legislature would send a message to state and national lawmakers and regulators, especially when coupled with similar declarations from other mid-Hudson jurisdictions.

Legislator Barbara Scuccimarra, who chairs the three-person committee and represents Philipstown in the county legislature, introduced the oil train topic by stating that “although these do not come through Putnam County, they do affect our neighboring counties and … our heritage river.” 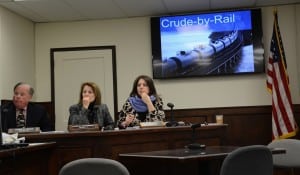 Cold Spring resident Paul Gallay, president of the clean-water advocacy organization Riverkeeper, briefed the committee, using a PowerPoint presentation. According to Gallay, daily two long trains, each carrying 3 million gallons of crude oil, bound for Philadelphia, and one barge, with 4 million gallons of oil, heading for New Jersey, come down the river. Moreover, he said, once a week, a tanker on the Hudson transports oil 8 million gallons destined for New Brunswick, Canada.

“This is an important issue for us because the risk is enormous, and it’s not just a risk on the other side of the river,” Gallay said. “The risk is real and the risk is local.”

Five days after the committee session, the risk became very local for a West Virginia community when residents were forced to evacuate after a CSX train carrying Bakken crude went off the rails along the Kanawha River. One or two rail cars tumbled into the river, nine to 17 other cars caught fire and/or exploded, oil on the water burned, and a nearby house went up in flames, according to local news media accounts Monday night (Feb. 16) as emergency teams responded.

The evacuation reportedly applied to homes within a one-mile area. And when an oil train derailed in northern Ontario on Valentine’s Day, seven cars caught fire; they still blazed on Monday, Canadian media reported. 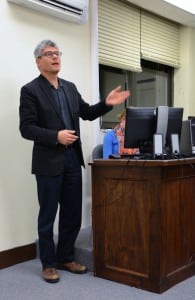 A 2013 oil train accident in Quebec killed 47 people and destroyed part of a village, and the same year an accident in North Dakota caused widespread damage and forced the evacuation of residents within five miles. Gallay mentioned both incidents in his presentation.

“It’s 800 yards across the river in its narrowest part from the oil-train tracks to the Cold Spring and Garrison area,” he said. (Eight hundred yards is less than half a mile.)

While the United States has boosted its energy independence thanks to U.S. and Canadian production, the oil “is not being moved safely,” Gallay told the legislators. Likewise, as slides he showed attested, the oil trains cross decrepit bridges, with damage to the structures visible. “Those bridges are quite frightening,” he said.

The Riverkeeper official also cited the nickname given to the strings of oil-bearing railroad cars: “Bomb” trains. “Riverkeeper did not say that first,” Gallay explained. “The engineers who man these trains came up with that expression because they realize the risks are real.” He told the committee that the National Transportation Safety Board — the agency investigating the fatal Feb. 3 Metro-North Harlem Line train accident — maintains that DOT-111 tank cars “should not be carrying this oil.”

Irv Flinn, a Putnam Valley resident who serves on the boards of the Hudson Highlands Land Trust and Philipstown Info Inc. (nonprofit parent of Philipstown.info), agreed. “Our nation has produced oil for centuries. We do need it — no question,” Flinn said. However, he added, “Bakken crude oil is different” because it “is hugely more risky. To treat it the same way or to think about it as casually as … ordinary crude oil is just wrong. It’s just stupid. So the issue here isn’t just crude oil; it’s this new, very dangerous crude that we need to respond to.”

He mentioned that DOT-111 cars were designed to hold orange juice and vegetable oil. “You don’t do that. You don’t just put something that’s highly volatile, that’s explosive, in those same cars,” Flinn said.

“It’s unfortunate because it’s really about greed with these companies,” Legislator Dini LoBue, a Health-Environmental Committee member, responded. She said Flinn had raised “a very good point” about the fearsome uniqueness of the new oil. “I think that’s why we’re here this evening, to have a discussion and bring this forward. We need to educate the public so they’re aware of the potential risks,” LoBue said. “All of us feel the same way, that we need to be able to transport the oil. But it needs to be done in a safe manner.”

Last May, the legislature called for a moratorium on the proposed Algonquin pipeline until safety concerns can be resolved. The Health-Environment Committee decided legislators should speak out again, in a new letter focusing on compressor station plans.

Opponents contend the enlarged compressor stations would expose humans and animals, including wildlife, to tons of toxic emissions yearly.

“You don’t have to be a genius to see you wouldn’t want to live in the neighborhood of one of these compressors,” Albano said.

Paula Clair, a Philipstown resident and member of the town’s Zoning Board of Appeals, concurred that the compressor stations “emit poisons” and said that “there are 17 [gas] pipelines proposed for New York state. They go through wetlands and require cutting down thousands of trees for each pipeline,” posing threats to clean water and nature in general. “I think the state will be in a lot of trouble if all these go through,” she said.

Gallay returned to update the committee on the cleanup of PCBs (polychlorinated biphenyls) in the Hudson, long after General Electric dumped them during industrial production. Basic cleanup so far “has actually gone relatively well,” he reported.

According to a memo, provided to the committee, from the Beacon-based Clearwater organization, a more comprehensive approach is necessary, with dredging of “all areas of PCB-contaminated sediments” in additional stretches; “removal of soils and sediments in PCB-contaminated ‘hot spots’ in and around the upper Hudson River, including clean-up of the Champlain Canal to ensure full use” by shipping vessels; and a cleanup of Hudson floodplains.

Gallay backed the wider mitigation. “It’s GE’s material. GE has to remove it,” he said.

The committee agreed to draft a resolution on the matter.