About 25 residents braved frigid temperatures on Monday night (Feb. 16) to attend a meeting at the Cold Spring Firehouse, part of an ongoing discussion regarding plans to replace the aging home base of the Cold Spring Fire Company (CSFC) at 154 Main St.

The public Q-and-A session, postponed one week due to a winter storm, was led by CSFC President John Landolfi and Assistant Chief Steve Smith. The audience included the five candidates running in the March 18 election for three seats on the Village Board. Landolfi and Smith answered questions submitted by email and also addressed comments from the audience. 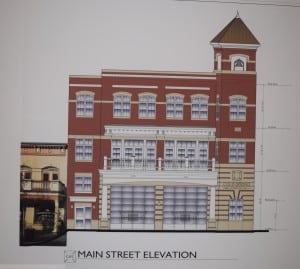 During a break in the question period, Smith reviewed modifications to the proposal presented late last fall that called for a three-story, 19,458-square-foot building that came with a price tag in excess of $6 million.

Plans have since been scaled back to a two-story, 14,193-square-foot building that would cost approximately $4.6 million to build. Additional costs such as engineering, demolition of the old building and storage required during construction could add another $800,000 to the bill.

Smith detailed facilities planned for each level of the proposed building. The basement would house utilities such as a furnace, compressors and generators. The main floor would include truck bays, a radio room, a laundry, decontamination and fitness rooms, showers and bathrooms.

A mezzanine made possible by the high ceilings required for the truck bays would be used for offices, storage and the board of governors’ meeting area. The second floor would include a meeting room accommodating up to 80 people, ready room, kitchen and bathrooms. A divider separating the two largest spaces would nearly double the capacity of the meeting room. 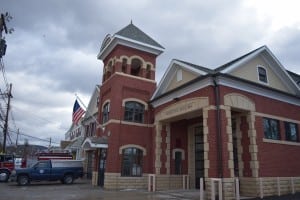 The design for a proposed Cold Spring fire station is based on the Fishkill firehouse, shown here. (file photo)

Any scenario to replace the existing structure will be costly. Smith said that North Highlands’ 17,000-square-foot fire hall cost approximately $4.7 million, an expenditure that was reduced somewhat because parts of the original building’s skeleton were kept intact. Mahopac’s completely new 34,000-square-foot fire station was initially estimated to cost $5.7 million but in the end came in at $8.7 million.

Resident Mike Armstrong questioned why a design for a Cold Spring firehouse put forward in 2012 was estimated at only $3 million. Smith said one reason was that the proposal did not take Wicks Law into account, a factor he said would add about 25 percent to the cost. Wicks Law requires municipalities to seek separate competitive bids from plumbing, electrical and HVAC as well as general contractors. 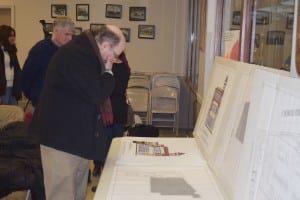 Landolfi also pointed out that the design was based on prefabricated components rather than a design created specifically for the lot that the current fire station occupies. Armstrong commented that the trapezoidal design currently being considered is inherently more costly than a rectangular building. He suggested that contractors be asked to bid on that type of design.

Early on, a question that may have been on the minds of many was addressed — why not simply repair the existing building? Smith said that previous engineering studies determined that is not feasible due to a number of serious structural flaws; for example, the piers that support the building are deteriorating; the west wall of the building is bulging outward; the floor of the meeting room is sinking; and the floor in the truck bay had to be reinforced several years ago. Cracks and settling are also evident in other parts of the building.

“The building cannot hold the weight [of the trucks],” Smith said. “We can’t remodel; it’s just not worth it … it would probably cost more” than building a new structure.

As in the past, the possibility of creating a new fire district was discussed, perhaps to include Cold Spring, the Village of Nelsonville, and parts of Philipstown now served by CSFC. That approach would make it possible to build the new fire station in Nelsonville, moving it away from the very cramped quarters on Main Street.

In a fire district, residents elect commissioners who administer the fire company within its area of jurisdiction. A fire district operates independent of local municipalities and has the authority to tax residents directly for fire protection.

North Highlands currently operates as a fire district. When a new fire station was built there several years ago, spending had to be approved by voter referendum. Residents voted “no” the first time. Plans and costs were then scaled back, and a second vote approved construction of the new facility. 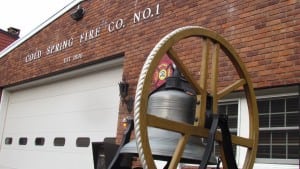 The existing Cold Spring firehouse has deteriorated and has several structural flaws.

Fire companies in Cold Spring and Garrison do not operate as part of a fire district and as such come under the jurisdiction of the municipality.

Another possibility is establishing a single, expanded town-wide fire district with all residents within its boundaries taxed at the same rate for fire protection. That is not the case now. Landolfi did not have exact figures available but said that local taxation for fire protection differs considerably.

He estimated that tax rates per thousand dollars of assessed property value vary from 83 cents in Cold Spring and $1.19 in Philipstown to $2 in Garrison and $2.50 in North Highlands. While economies of scale may be possible by forming a large, merged fire district, it would require agreement among the villages of Cold Spring and Nelsonville, the Town of Philipstown and the North Highlands Fire District.

The CSFC itself has twice voted against creating a fire district for Cold Spring, Nelsonville and adjacent parts of Philipstown, in recent years. One obstacle Landolfi pointed to are the “service awards” that provide a form of pension to firefighters, paid for by Cold Spring taxpayers. He said it’s possible that if a new fire district were formed, Cold Spring taxpayers may be required to fund the existing service awards as well as the pensions required by the new district.

He also hinted at a loss of local autonomy, suggesting that while the CSFC has always had an “open-door policy” regarding use of its meeting room by community groups, in a fire district such decisions might not be made locally. 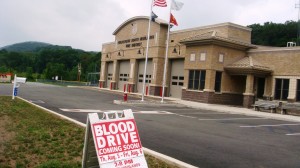 To date, the lack of success in streamlining local government and related services does not bode well for a dovetailing of fire protection services. A report commissioned by the Town of Philipstown in 2011 that supported consolidation of fire departments town-wide was strongly criticized by local fire companies.

No one in attendance questioned the need for a new fire station; in fact Landolfi and Smith received a round of applause at the end of the meeting for having provided updated information on the proposed project. The big question that remains is how the new facility will be funded in a village with fewer than 900 taxed properties.

“The Village of Cold Spring has to go after grants,” Landolfi said. “We [CSFC]can’t apply for grants.” Trustee Stephanie Hawkins, however, encouraged the fire company to be a part of the grant-seeking process. Landolfi responded in part by saying, “It’s a no-brainer; you have to hire a grant writer now.”