Have a home crammed with things — whatever your particular weakness in things might be — which enticed you to make a purchase despite the lack of space to accommodate them? Have some degree of sympathy, then, for Kevin Burke and David Kimelman, whose business, Burkelman, grew out of this susceptibility. The two, who are married, have traveled extensively, and with that travel come things spotted while roaming. Added to that are the treasures found while roaming online, all fueled by the pair’s passion for home design. Handily, they have made these acquisitions the foundation for Burkelman, which, in its latest incarnation, has just opened its first brick-and-mortar store at 101 Main St. in Cold Spring. 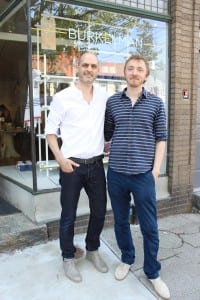 Kevin Burke, left, and David Kimelman, who together form Burkelman

With professional backgrounds complementing their interests, Kimelman a successful photographer and Burke a buyer and merchandiser for leading fashion brands, they decided to essentially curate a collection and offer it online under their combined name of Burkelman. Establishing their brand online first seemed the most prudent step, and shopburkelman.com was launched, conceived of first from their then-apartment in Brooklyn, the carefully chosen objects residing, at that time, in a well-stocked room. Aiding and abetting their new venture was Kimelman’s experience working in the famed Soho design store Moss during his college years, along with Burke’s expertise in corporate retailing, designing and setting up displays at literally hundreds of stores, including Henri Bendel, Bergdorf Goodman and Bloomingdale’s; his last position was in consumer engagement for Tommy Hilfiger.

A short time later, deciding that they would like to become parents through the open adoption process (in which the biological parents have the option to contact the children), Burke and Kimelman revamped their lives, opting for a total change of lifestyle and habitat, quitting their day jobs and moving to a restored barn in Croton after years of city life. They weren’t sure what their futures would entail at that point but wanted to change their lives and involve design and interior in whatever resulted. That result turned out to be their website, which immediately drew attention with the help of mentions and spotlights in publications like Architectural Digest and Vogue as well as in multiple design blogs, which cited the clean design and references to nature in most of the collection.

“Having a retail space was always part of the vision,” Kimelman recalled, with Burke piping in that they became even more aware that their merchandise was meant to be seen, touched and felt, when his aunt visited them at a time when they had a lot of it lying around the studio, and “she was grabbing at it — the platters, the dog leashes, everything.”

“We knew then we needed a store,” Kimelman said. 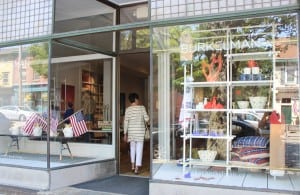 Only a few hours old, Burkelman was already drawing shoppers on their opening day, July 3, 2015.

In the winter of 2013–14 they started spinning the idea around, initially hoping to open in the summer of 2014, beginning to look at spaces in various locations throughout the Hudson Valley. However, during the first week of the website launch, they got the news that their baby was about to be born, earlier than expected. And — in an even greater surprise, that “baby” needed to be changed from the singular to plural — it was determined that twins were being carried. With that, the website was delayed for six weeks, allowing bonding time with their newborn boys, who are now 14 months old.

Putting the retail side of things on hold for a while, the pair eventually returned to the hunt for the right space, visiting potential spots in Tarrytown, Beacon and Katonah before deciding that Cold Spring was where they wanted to be. The proximity to the train station, making it easy for people to come up from the city, was an important factor, as they hope to become a destination store, trading on the popularity of the site. They anticipate that clientele will be a mixture of locals, tourists and those who journey specifically to come see the store and then enjoy the rest of what Cold Spring and Beacon have to offer. “They can go hiking, eat out and not worry about anything because we ship — being an online retailer we’re used to that,” Burke said, adding that any order over $150 ships free to the tristate area. 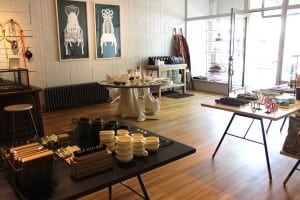 Taking over what was formerly the warren that was Once Upon A Time Antiques (which has moved to another location on Main), Kimelman and Burke utilized their trained eyes to see how they could renovate the 1,500-square-foot space to create what they wanted. They visited several times before making the decision, and now the large airy room is the antithesis of what it was formerly, Burke’s expertise in design readily apparent in the choices made in display tables, some made out of beautifully gnarled tree stumps, alongside contemporary Danish shelving. As with the website, which benefits from Kimelman’s graphic and photographic expertise, there is an effort to avoid all hodgepodge, instead to set off objects with other carefully chosen objects and maintain a kind of retail design, which then dovetails with the merchandise itself.

Discovering that behind the pegboard walls lay a gorgeous, imperfectly perfect original, they were emphatic that their landlord leave it untouched. They have been told that their store was originally part of the original Palens Drugstore, next door, and that the soda fountain counter ran right along the shared wall area. Holes still visible in the floor are evidently where the stools for the soda counter stood — a detail they love. Mix in the antique hardwood floors, original tin ceilings, structural beams and expansive storefront windows, and the history of the space is evoked, complementing its now-contemporary aesthetic. 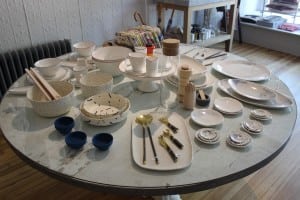 Their home still hosts many of their finds: “We have to restrain ourselves and remind each other that we buy these things to sell them,” Kimelman remarked ruefully. Their rotating collection of tables and other furniture is offered for sale, along with linens, tableware, jewelry, lighting fixtures, pillows, textiles, fine art (paintings and other artwork, including cut-out, single-sheet paperwork designs of chairs by artist and Burkelman employee Gail Cunningham, are hung on the walls). The artisans come from around the world and include several from the Hudson Valley. Wedding and gift registries account for a lot of the sales volume, with Burke acting as personal registry consultant.

Most of the lines they carry, along with extensive photographs of what is available, can be found on Burkelman’s website, shopburkelman.com. The store is open Monday, Thursday, Friday and Saturday from 11 a.m. to 6 p.m., Sunday noon to 5 p.m., and Tuesday and Wednesday by appointment. For more information, phone 845-809-4844.